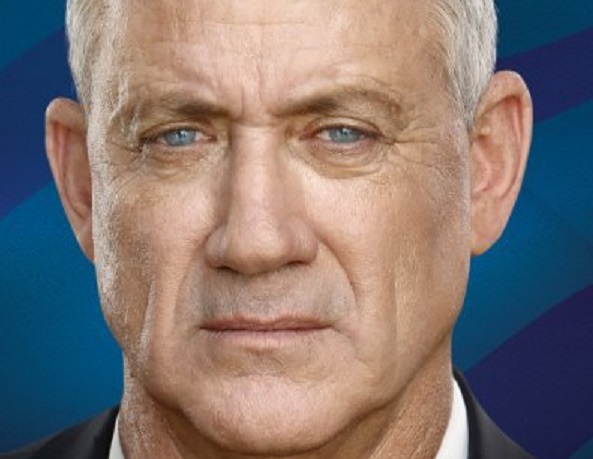 Benny Gantz, Israel’s Minister of Defense and the former Israel Defense Forces Chief of Staff, has seemingly accepted the concept that Jerusalem should serve as two different capitals for two different peoples. The leader of Israel’s Blue and White Party and Israel’s “Co-Prime Minister” stopped short, however, of agreeing to once again divide Jerusalem physically, only hinting that the Palestinians could somehow also use the city as a capital for an independent Palestinian state even as it remains under Israeli sovereignty.

Minister Benny Gantz’s comments were made in an interview with the Arabic newspaper Asharq al-Awsat.

“I want Palestinians to be part of the peace process. The push for normalization within the Arab world is a great and real opportunity,” Gantz told the paper. “Jerusalem will remain undivided, but there is room for a Palestinian capital in it.”

Speaking about the Palestinians Benny Gantz said that, “They want and need an entity in which they will live independently. A state or a kingdom, they can call it whatever they like. It is in their right to have independence and a capital which will be a solution to all deadlocked issues.”

But many see this as nothing more than political posturing as Israel is probably headed to new elections. Its current coalition government has been in crisis for several weeks now and its members have until next Tuesday to reach a deal and avoid the dissolution of the Knesset.

Last April Benny Gantz stunned the country by agreeing to serve in a coalition government with Likud leader Benjamin Netanyahu continuing as Israel’s Prime Minister. For more than a year he and his partners in the Blue and White Party insisted that Netanyahu, who is under a criminal indictment, must go and that they would never agree to join a coalition government as long as he remained in office. 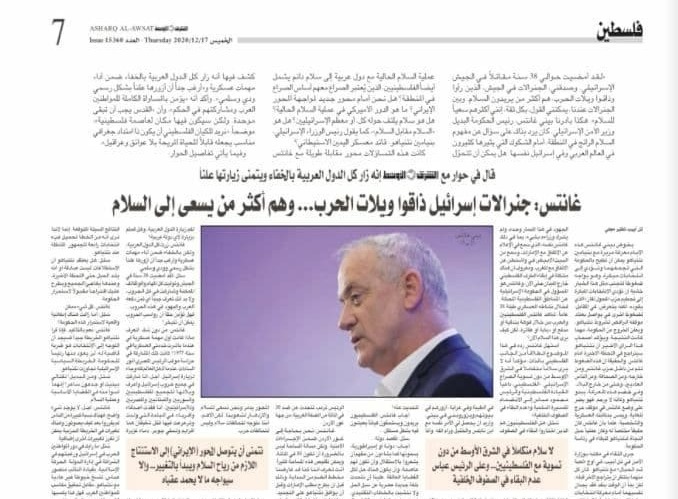 But after three different national elections in less than a year and the national shutdown due to the Corona Virus Crisis Benny Gantz changed his mind. This was seen as a betrayal on the part of his partners in their joint list which included parties led by Yair Lapid and former Defense Minister and IDF Chief of Staff Moshe Ya’alon who both swore never to work with Netanyahu again. Laid had briefly served as a cabinet minister in a coalition government under Netanyahu and Ya’alon previously served as his Defense Minister while then a member of Netanyahu’s Likud party.

So if new elections are to be held in Israel Mr. Gantz will need to go it alone this time. When he formed a joint list with Ya’alon and Lapid almost two years ago his party was the largest, according to the polls. So his Blue and White party took the most spots on their joint list. But today polls show Gantz lagging far behind the remaining joint list party led by Mishe Ya’alon and Yair Lapid.

Many Israelis were disappointed in him for breaking his pledge not to work with Netanyahu and did not accept his rationalization that the Corona Virus crisis made it necessary to do so.

Since the start of their coalition government Benjamin Netanyahu and Benny Gantz’s relationship has been a volatile one, to say the least. Gantz knew not to trust Netanyahu so when the two agreed to a rotating premiership with Netanyahu going first they came up with a new concept of being “Co-Prime Ministers” or “rotating” prime ministers.

But few political observers thought that Gantz would ever actually become the Prime Minister himself, expecting Netanyahu to renege on his promises as he always does. New election is actually the only way in which Benjamin Netanyahu can do so.

So why would Benny Gantz make these comments? What does he have to gain?

Well if there are new elections he will certainly not be able to run on an anti-Netanyahu platform as he did the previous three times. He mooted that by joining a Netanyahu led coalition. And he must find a way to stand out from hos former partners who will continue to campaign on the anti-Netanyahu mantra.

Or maybe Benny Gantz is just posturing to scare Netanyahu in order to prevent new elections.