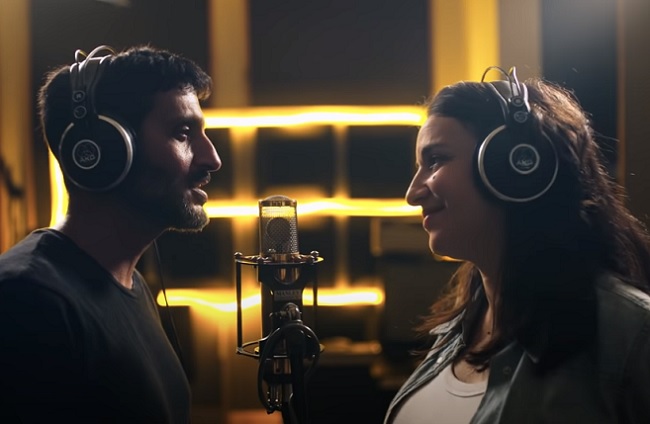 Lucy Aharish and Tzahi Halevi have just come out with their new duet music video “SEEN”. Their winning song will become part of a campaign for Sofia Lauren’s new film THE LIFE AHEAD, which is currently being released.

The two are not known for music; Aharish is a journalist and Halevi is an actor. The song is in English, Hebrew and Arabic and was written by Diane Warren.

Lucy Aharish, 39, is a Muslim Arab woman who grew up in the Israeli city of Dimona. She married Jewish-Israeli actor Tsahi HaLevi, 45, in a private ceremony in 2018. The two kept their relationship secret for a long time out of fear of reprisals for being a mixed couple. The couple is now expecting a baby.

Aharish was fired from her job last March as a news presenter on Israel’s KAN television station, which until recently was known as the nation’s Channel One national public television. The official reason given at the time was budget cutbacks due to the Corona Virus crisis. But many felt that this was just an excuse to get rid of her because Aharish had joined on line protests against how the Israeli government has handled the Covid-19 shutdowns.

In fact, she is still at it calling Israel’s newly implemented 7PM curfew over the Hanukah holiday “The twilight of democracy?”

Tsahi Halevi has appeared in Israeli hit TV shows Sirens and the Grave. He has also been in Israel’s international hit show Fauda, which can be seen on Netflix.

“Excited to release our new and shared child to the air – an international new song written and composed by the legendary Diane Warren, the song is a special version of the theme song and part of the campaign for Sophia Lauren’s new film.”

“The Life AHEAD that came up these days to the projectors. Thank you to Irit Tanengle for believing in us, we are excited about the result, hope you like it too. Share and write to us in the comments what do you think ???? Tzachi and Lucy”
a