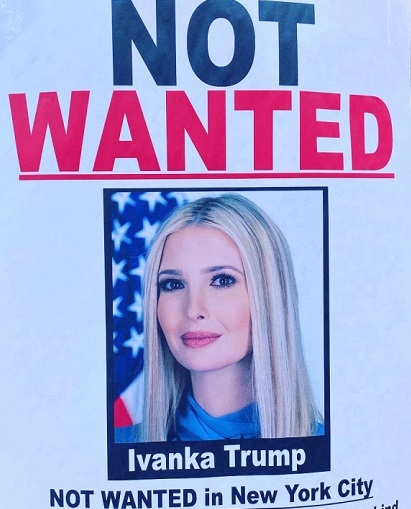 People in New York really don’t want Ivanka Trump and hubby Jared Kushner coming back there after President Trump leaves office. Some have even gone to the trouble of posting mock “Wanted” posters of Ivanka around town and some of her friends have been telling media outlets recently, albeit anonymously, how much the couple is not really wanted back in their former social circles. For her part, Ivanka is trying to boost her image with a number of self glorifying posts on social media.

The posters have been shared all over social media. They are made to look like a “Wanted” poster for criminals, but instead they read “Not wanted in New York City.” A short description of Ms. Trump appears underneath with a somewhat snarky description of husband Jared Kushner as “Slenderman.”

Ivanka Trump also took the opportunity to share some pictures of herself all gussied up at a summit in India. The pictures appear on both her Instagram and Twitter accounts. They were from the Global Entrepreneurship Summit in Hyderabad, India when she lead a 350 member delegation from the United States.

Ivanka wrote, “As the world continues to battle COVID-19, our countries’ strong friendship in promoting global security, stability, and economic prosperity is more important than ever.”

Fond memories from the Global Entrepreneurship Summit in India?￰ﾟﾇﾳ with Prime Minister @narendramodi!

As the world continues to battle COVID-19, our countries’ strong friendship in promoting global security, stability, and economic prosperity is more important than ever. pic.twitter.com/t16pEpFB2g 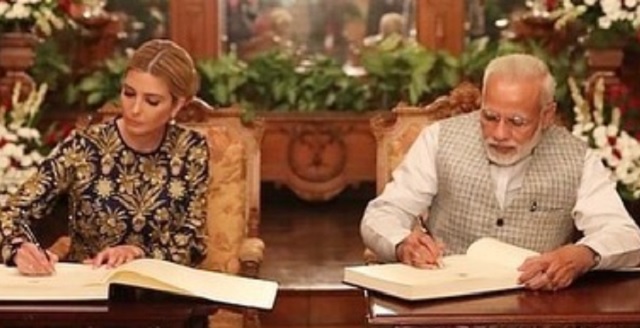 When signing some documents with the Indian Prime Minister Narendra Modi the first daughter is wearing a relatively conservative dress and looks somewhat, shall we say, leader-like. Or perhaps she wants people to see her as presidential.

In another picture from the same post Ivanka Trump is seen wearing a somewhat revealing green evening dress.

What gives? Why release such pictures now, as her father President Trump is clearly on his way out of office? Some would say that she is positioning herself for a political run of her own some day. 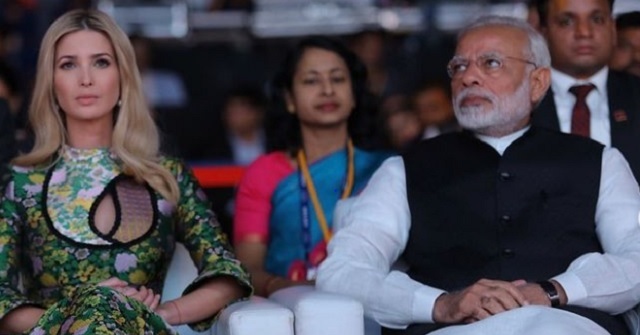 If so, it will clearly not be in New York. Or maybe Ivanka is just bringing in a few extra bucks by promoting the brands which she wears in all of these pictures. The First Daughter has also posted a blitz of images of herself from over the Thanksgiving holiday weekend wearing all sorts of fancy schmancy clothes.

If the news about tax scam investigations have any merit she may need the income to pay for a lot of upcoming legal fees.