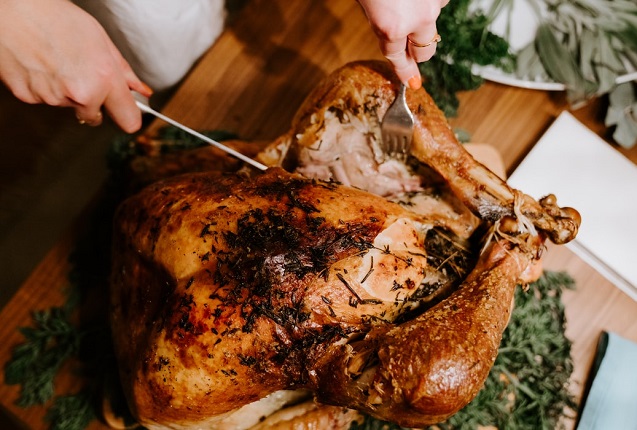 It’s the fourth Thursday in November today so happy Thanksgiving. It was set on a Thursday so as to give people a long weekend.

Americans are trying to celebrate Thanksgiving this year while observing Corona Virus social distancing guidelines. Families who are unable to get together are using eservices like Zoom to have virtual Thanksgiving dinners. But the Covid crisis has not dampened America’s holiday spirit and millions will still be eating big turkey dinners.

Here is just a slice of how the media is covering the big day this year.

England’s The Guardian shares a story about a violent turkey named Gerald in Oakland’s rose garden. The paper recounts the tale of one Jojo Thompson, a sixteen year old who had a run in with Gerald.

“I had heard of his attacks, but I never thought it would happen to me,” Thompson said. “All we could do was run.”

Julia Williams did not even enter the park and still had a freight when headed back to her car with a pile of laundry.

“Once we locked eyes he sprinted towards me, wings outstretched. I just barely made it to my car but completely threw my back out in the process. I was in bed unable to walk for over a week.”

“He had this habit of loitering by the stairs of the garden, almost daring you to walk up or down,” said Maria Hunt, who has lived near the garden for more than a decade and was attacked by Gerald two separate times in 2020. “Gerald was like a winged boogie man, a Cerberus of the rose garden who would have been comical if he hadn’t been so menacing.”

Read the full story to find out what happened to Gerald.

The New York Post offers a story on the truth about wild turkey sex. Apparently the males will swagger about “gobbling loudly with their chests puffed and their tails fanned out like burlesque get-ups in a display known as strutting.” They have a fleshy appendage dangling from their beaks called a Snood.

Apparently the males use their snoods to show dominance over the other turkeys and the longer the snood the more dominant is the bird. Sound familiar? It sounds like male turkeys may suffer from Snood Envy.

CBS News offers us a glimpse at the plight of Wild Turkeys. This breed of turkey was once almost extinct.

“At first encounter, wild turkeys present as giant, goofy-looking, wandering birds. There are surprises in store, though, with a little time spent observing wild turkey behavior,” writes Christy Frank. “They experience similar emotions to humans, including fear and happiness, and even express these feelings by changing the color on their wrinkled, bald heads to a pinkish-red, blue, or white! Turkeys are incredibly intelligent, curious, and even playful.”

“Their calls and gobbles carry over a mile away, and they are astonishingly fast runners, reaching speeds of 25 miles per hour. While wild turkeys are mostly observed on the ground, hunting for food such as insects, small mammals, amphibians and reptiles, they actually fly up into the trees to roost and sleep away the night, safely above predators.”

Fox News reported on how the police in Delray Beach, Florida teamed up with a group of local nonprofits to giveaway free turkeys to more than 100 senior citizens.

“Normally, we would have had a big dinner for the senior citizens in-person at Pompey Park,” Chief Javaro Sims said in a statement to Fox News. “But because of COVID-19, we couldn’t do it this year. Handing out the Thanksgiving baskets was the best way we could say thank you to our seniors.”

More than 100 senior citizens received turkeys with all the fixings at Pompey Park today. Delray Beach Police Chief Javaro Sims, the Community Oriented Policing Unit and other volunteers helped load the turkeys into the cars.https://t.co/IYJ7wLoo8Y

And of course you can find countless turkey recipes on line and videos showing you how to do the cooking.

So let’s stay in the spirit today. But try not to eat too much!