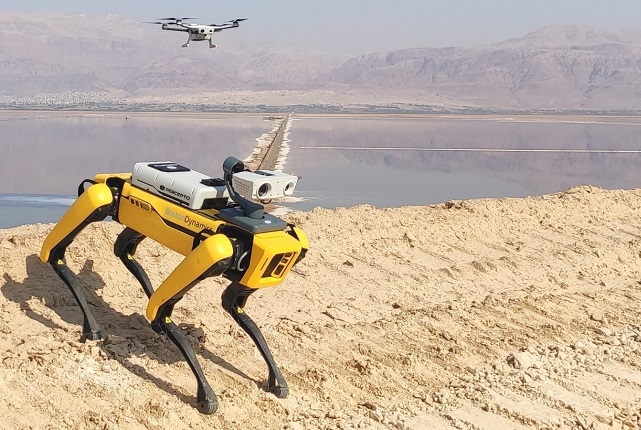 Israeli drone developer Percepto has teamed with Boston Dynamics to integrate the technologies of the two companies. The Startup has also just completed a $45 Million Series B investment round led by Koch Disruptive Technologies.

Percepto offers an on-site, weatherproof, AI-powered autonomous industrial drone solution which enables consistent and persistent visual asset monitoring and protection of assets while being controlled remotely, from anywhere in the world. Its tech is being integrated with Boston Dynamics’ Spot.

Boston Dynamics’ Spot is an agile mobile robot that navigates terrain with unprecedented mobility. Percepto has integrated Spot with AIM (Autonomous Inspection and Monitoring) for the robot to automate inspection rounds completely controlled remotely via the platform. Spot carries Percepto’s payloads for high resolution imaging and thermal vision to detect issues including hot spots on machines or electrical conductors, water and steam leaks around plants and equipment with degraded performance, with the data relayed via AIM.

Just a few weeks ago Percepto’s drone tech was used recently to fight fires in California. Skyward, a subsidiary of Verizon, operated the drone over a distance of 2,500 km in order to inspect possible damage to communications infrastructure. Such infrastructure is vital to the ability of firefighters and other rescue workers in the performance of their work.

The drones were also deployed to film what was happening on the ground in places where people could not go due to the danger, assess the situation and to predict the continued spread of the fire.

“Our customers, which include some of the world’s leading utility, oil & gas sites, mining and other critical infrastructure facilities, are eager to fully embrace automation across their operations and reap the benefits of driving efficiency, reducing costs and safeguarding staff. We’re excited to be the first to empower our customers with truly autonomous inspection and monitoring, driven by the management of multiple visual robotic data sources together with other visual sources including piloted drones, CCTV and mobile cameras, on site or remotely,” said Dor Abuhasira, CEO and Co-Founder Percepto,

“We’re delighted that our investors have recognized the growing need in the market for autonomous inspection which is in demand now, more than ever.”

Join @UKAEAofficial‘s free Zoom webinar to learn more about our Spot robot and its recent trip to Chernobyl. Tune in tomorrow, Nov 18th at 8:30am EST/1:30pm GMT: https://t.co/DRb3paOfIw pic.twitter.com/1qBDDFGRI1

“We believe Percepto AIM addresses a multi-billion-dollar issue for numerous industries and will change the way manufacturing sites are managed in the IoT, Industry 4.0 era,” said Chase Koch, President of Koch Disruptive Technologies.

“Percepto’s track record in autonomous technology and data analytics is impressive, and we believe it is uniquely positioned to deliver the remote operations center of the future. We look forward to partnering with the Percepto team to make this happen.”