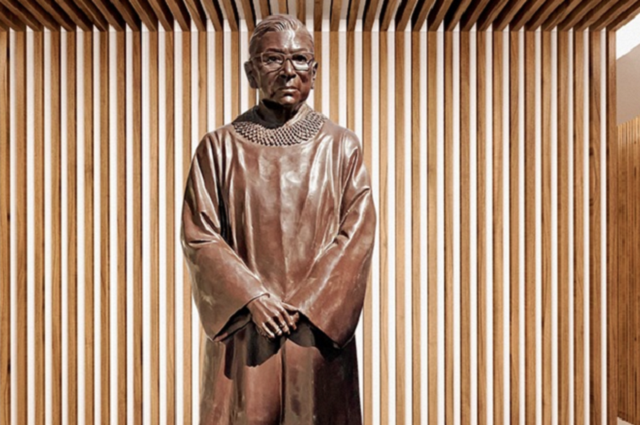 A new statue of Ruth Bader Ginsburg will be unveiled in City Point Brooklyn next year. And one last book of her legal writings and speeches called “Justice, Justice Thou Shalt Pursue” just came out.

The statue will be unveiled on what would have been Ruth Bader Ginsburg’s 88th birthday on March 15, 2021.

It will be located at 445 Albee Square in Downtown Brooklyn and was designed by the artists Gillie and Marc.

On Wednesday Governor Andrew Cuomo of New York announced plans for another statue commissioned by the State.

“Ruth Bader Ginsburg embodied a set of ideals often missing in today’s civic dialogue — she showed us reason, empathy and hope,’’ said Governor Cuomo. “Her legacy as a jurist, professor, lawyer and scholar will endure for generations and we are honored to erect a permanent statue.”

But statues are not a part of the Jewish tradition. In Israel you will not see statues everywhere of important political figures as you find in Washington.

So maybe Ruth Bader Ginsburg would not have approved of such a statue. Portraits, however, are acceptable.
https://www.ucpress.edu/
Meanwhile, the University of California Press has announced a new book called “Justice, Justice Thou Shalt Pursue: A Life’s Worth Fighting for a More Perfect Union.” The book is the result of a period of collaboration between Ginsburg and Amanda L. Tyler, a Berkeley Law professor and former Ginsburg law clerk.

It has previously unreleased materials and a collection of notable briefs and oral arguments, some of Ginsburg’s last speeches, and her favorite opinions that she wrote as a Supreme Court justice, along with the statements that she read from the bench in those important cases.

Each document was chosen by Ginsburg and Tyler to tell the story of the litigation strategy and optimistic vision that were at the heart of Ginsburg’s unwavering commitment to the achievement of “a more perfect Union.”

“Over the spring and summer of this year, as Justice Ginsburg and I assembled this book, I had the special privilege of working closely with her one last time,” said Tyler, now a professor of law at the University of California, Berkeley, in a statement.

“As we exchanged drafts of various parts of this book, the Justice was every bit as rigorous an editor as she had been 20 years ago when I clerked for her. Right up until the end, she was still teaching me about the craft of writing, how important precision is, and to never use four words when three will do.”

In this article:Finance, Ruth Bader Ginsburg