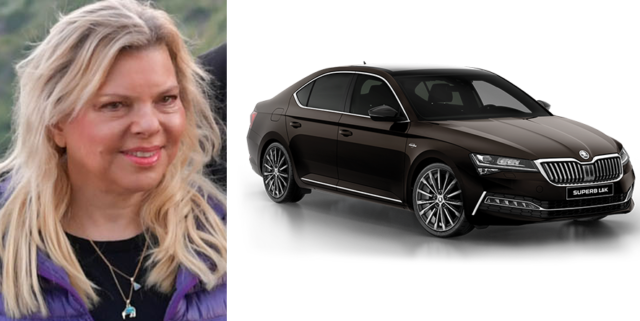 Sara Netanyahu is to become the first wife of an Israeli prime minister to receive her own armored vehicle, which is believed to cost more than NIS 1 million ($330,000).

The vehicle, a Skoda Superb, will arrive in Israel in the coming days alongside other cars destined for high-level officials, such as former prime ministers Ehud Barak and Ehud Olmert.

The Prime Minister’s Office security department had in 2018 asked the Finance Ministry to allocate funds for the purchase of an armored vehicle for the premier’s wife, citing security concerns.

Some at the Treasury protested the high cost of purchasing a bulletproof vehicle for the wife of the prime minister, but it was eventually approved.
Sara Netanyahu has claimed that she did not personally make the request to purchase the vehicle and was in fact unaware of the matter.

Prime Minister Benjamin Netanyahu travels in an armored vehicle during trips to certain destinations or during periods of high tension, but this is the first time a prime minister’s spouse has been assigned an armored vehicle for her personal use.

No government ministers, except for the defense and finance ministers, are assigned an armored vehicle.

The Prime Minister’s Office declined to comment on the matter.