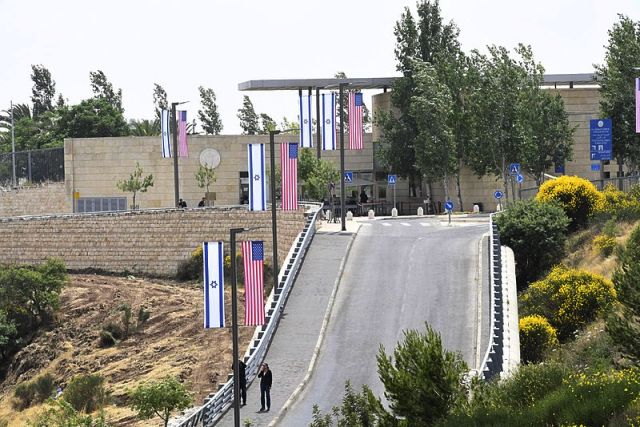 The US Embassy in Jerusalem

When politicians say of any problem that their position is “clear”, you can be pretty certain that it is anything but.  Clarity on the issue of Jerusalem, its status and its future, has been claimed recently by both the United Nations and the European Union.  In fact the positions of both organizations on the matter are as clear as mud.

The claim on behalf of the UN was made by Nickolay Mladenov, its special coordinator for the Middle East peace process, in a session of the UN Security Council considering US President Donald Trump’s decision to move the American embassy to Jerusalem.  The United Nations position, he announced, was clear.  “Jerusalem is a final status issue for which a comprehensive, just and lasting solution must be achieved through negotiations between the two parties, and on the basis of relevant United Nations resolutions and mutual agreements.”  That formula has been repeated several times since, most recently by UN Secretary-General António Guterres in February 2020.

In other words, the UN holds that the exact status of Jerusalem in international law is as yet undetermined.  Yet the Security Council, in its Resolution 2334 passed in 2016, had determined that the status of Jerusalem was at it had been on 4 June 1967 – that is, on the day before the Six Day War commenced – referring three times to “Palestinian territories including East Jerusalem.”

So the UN’s “clear” position is that it asserts that East Jerusalem is part of Palestinian territories, but in the same breath maintains that Jerusalem is a final status issue to be determined through negotiation.  It recognizes no changes to the pre-Six Day War boundaries, except that it does not recognize that West Jerusalem at least was part of Israel at the time. Its position defies logic.

The European Union also believes that its stance on Jerusalem is crystal clear.  As recently as February 2020 it issued a statement, prefaced by the words: “The European Union has a clear and united position on Jerusalem.”  What is that position?  “The EU remains firmly committed to the two-state solution, with Jerusalem as capital of both the State of Israel and the future State of Palestine.”

That is as ambiguous a clarity as it is possible to achieve.  Does the EU believe in an undivided capital shared between Israel and an as yet unestablished state of Palestine, administered jointly?  Or does it subscribe to a divided Jerusalem with West Jerusalem the capital of Israel, and East Jerusalem, which has a large Arab population that extends into its hinterland, serving as the capital of a new sovereign Palestine?

What of the status of the Old City?  The EU has nothing to say on that.  Before the Six-Day War, it was occupied by Jordan, which instituted a program of “Islamization” in 1953, prohibiting Christians from owning or purchasing land near holy sites, and removing educational institutions from Christian control, while Jordanian troops desecrated Jewish synagogues and holy sites including the Western Wall, the holiest of all.  Does the EU endorse a return to that situation?

The EU condemned Trump’s recognition of the city as Israel’s capital, taking no account of his statement: “We are not taking a position on any final status issues, including the specific boundaries of Israeli sovereignty in Jerusalem…Those questions are up to the parties involved.”  Nor has the EU taken on board what Trump said at the unveiling of his peace plan – namely that it envisages a Palestinian capital in eastern Jerusalem to be called Al Quds, where the US will “proudly” open an embassy.

Because the EU’s position on Jerusalem is so obscure, it cannot endorse the idea of any national embassy being sited there – not even in West Jerusalem, which it cannot bring itself to acknowledge as lying within sovereign Israel.  This is why the EU voiced “serious concern and regret” when Serbia and Kosovo announced, on 4 September 2020, that they intended to locate their Israel embassies in Jerusalem. These intentions were incorporated in a signing ceremony in the White House brokered by President Trump, when Serbia and Kosovo agreed to normalize their relations and pursue economic cooperation.

In a statement three days later, the EU spokesperson objected, implying that breaking with the EU’s common position on Jerusalem could undermine the prospects of Serbia and Kosovo becoming EU members.

The European Leadership Network (ELNET) expressed deep concern over the EU’s stance. In its statement, ELNET said it “strongly believes it is high time the EU updates its position on Jerusalem and recognizes Israeli sovereignty over West Jerusalem…Objecting to European embassies in any part of Jerusalem completely defies reality. Jerusalem has been Israel’s capital city since Israel’s inception.”

The ELNET statement urges the EU to abandon “entirely anachronistic UN stipulations”. It is referring to the 1947 UN General Assembly resolution 181 (II): “The City of Jerusalem shall be established as a corpus separatum under a special international regime and shall be administered by the United Nations.”

Astonishingly this resolution has never been countermanded.  It is undoubtedly dead in the water.  It has never been proposed by any party in the many attempts at settling the Israel-Palestine dispute.  Yet incongruously the UN as a whole, like the EU, still clings to the concept of an internationalized Jerusalem administered by the UN, turning a blind eye to the Security Council’s support for the incompatible objective of “a viable state of Palestine in the West Bank, including East Jerusalem.”

Clarity is the last word that either the UN or the EU can legitimately apply to their stated views on Jerusalem, while their objections to any nation locating its embassy at lEast in West Jerusalem have no basis in logic. Arab states are lining up to normalize their relations with Israel. It is time for both the UN and the EU to have a radical rethink about Jerusalem.