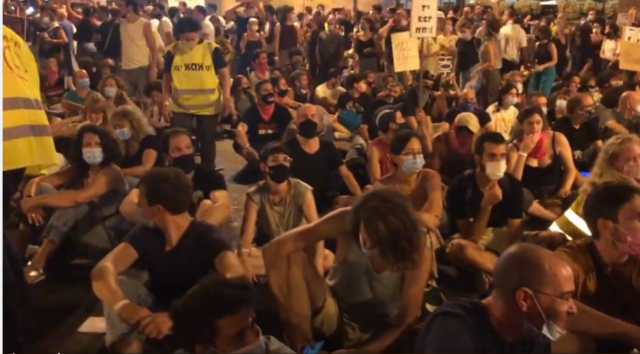 The Knesset on Thursday evening passed the first reading of a bill to tighten coronavirus restrictions, which is set to come into effect on Friday for a period of two weeks and cracks down on public protests and prayers.

The new restrictions, which aim to reduce Israel’s soaring infection rate, were approved by the cabinet on Wednesday amid warnings from ministers that the cost to the economy could reach NIS 35 billion (approx. $10 billion).

After the first vote, the bill went to the Knesset Constitution, Law and Justice Committee where a final draft was to be agreed upon, before heading back to the plenum for the final voting.

Israel is already under a less stringent closure that came into effect last week, which saw limits placed on commerce, social gatherings, and cultural events in an effort to reduce the number of daily coronavirus infections that in recent days have hovered around an alarming 7,000 mark.

The tightened lockdown was to include the closure of all non-essential industry and businesses, strict restrictions on travel, movement, and congregation, closure of houses of prayer with worship allowed outdoors in groups of no more than 20 people.

There will be an exception on prayers for Yom Kippur, the holiest and most solemn day of the Jewish calendar that begins Sunday sundown when synagogues will be allowed to open, and an estimated 2 million Israeli Jews are expected to attend services.

For months, protesters have been demonstrating outside Prime Minister Benjamin Netanyahu’s official residence in Jerusalem to demand his resignation for what they say is his mishandling of the pandemic and over his indictments for bribery, fraud, and breach of trust.

Israel on Thursday reported nearly 7,000 new cases of COVID-19 as the national death toll from the disease reached 1,376. Health officials said that 400 people died from the disease in the past month alone.

Coronavirus czar Prof. Ronni Gamzu said earlier Thursday that while he did not make the recommendation for the government to impose a tighter lockdown, he would respect the decision that he said was a warning to the public about the surging spread of the virus.

Deliberations were expected to continue late into the night as many legislators from the coalition and the opposition demanded time to speak, with the issue of restricting protests at the center of the debate.

Opposition lawmakers have accused the prime minister of using the spiraling morbidity as an excuse to silence the protesters against him.

Likud minister and Netanyahu ally Dudi Amsalem told the plenum that demonstrators were responsible for spreading the coronavirus, while Likud whip MK Miki Zohar said that if Netanyahu’s coalition partners in the Blue & White party moved to protect the right to demonstrate, the unity government would have to be dissolved.

Opposition lawmaker Ayelet Shaked of Yamina, a former justice minister under Netanyahu, said the decision to close down the economy to such an extent was “outrageous and must not be allowed to proceed.”

Outside the Knesset, protesters gathered to express their outrage at the government’s move to restrict what they call their democratic right to demonstrate.

Prominent anti-Netanyahu activist Orly Bar-Lev told Israel’s public radio on Thursday that the prime minister’s bid to silence citizens “was unacceptable and against the spirit of the law because he himself is the subject of the protests and therefore should not be allowed to rule on their scope.”

Two protesters were detained by police at the Knesset after refusing to identify themselves to an officer at the scene.