The sale of such advanced aircraft could end Israel’s qualitative military edge in the region, the preservation of which is enshrined in American law.

The paper quoted senior American officials as saying that Netanyahu chose not to oppose the deal as it progressed in a parallel track to talks on the normalization agreement between Israel and the UAE, which was announced by the White House on August 13.

Days after the agreement with the UAE was announced, Ynet reported a clause in the agreement allowed the U.S. to provide the UAE with F-35 fighter jets and advanced drones.

Netanyahu swiftly denied the existence of such a clause, but the American officials told the New York Times that those public denials “were false.”
The prime minister branded the Ynet report “completely fake news.”

“The peace agreement with the UAE does not include any clause of this kind, and the U.S. has made clear to Israel that it will always ensure that Israel has the qualitative advantage,” the Prime Minister’s Office said in a statement in Hebrew that was tweeted by Netanyahu on August 18. 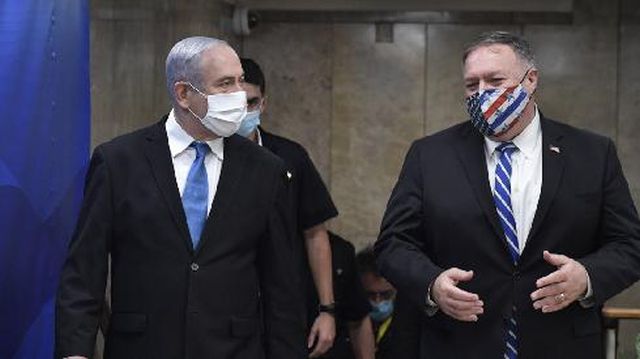 But citing the U.S. officials, the New York Times said Netanyahu “stopped publicly complaining about the proposed arms sale after a meeting with [U.S.] Secretary of State Mike Pompeo in Jerusalem last week that brought the Israeli prime minister back in line.”

According to the report, “American officials are careful to insist that the new push to sell the weapons to the Emiratis is not a direct reward for their role in the agreement… [b]ut they do not dispute that after years of American refusals to sell F-35s to the Emiratis, the change in position is linked to the diplomatic initiative.”

The UAE said the normalization agreement with Israel was contingent on Jerusalem halting its plan to annex parts of the West Bank.
A delegation of Israeli and American dignitaries on Monday was on board an El Al plane as it made the first-ever direct commercial flight from Israel to the UAE. The delegation held talks with Emirati officials in Abu Dhabi.

The Times also reported that “dozens of Emirati officials” met last week with American officials at the Pentagon and the State Department “to discuss the arms package and their diplomatic initiative with Israel.”

According to Hussein Ibish of the Arab Gulf States Institute in Washington, he was informed by officials of all three countries involved that Netanyahu “gave a green light” to the sale of the fighter jets, but later publicly denounced it following the backlash in Israel.

Ibish told the Times that the prime minister informed the U.S. and UAE “there would not be substantive and categorical opposition” in Israel to the sale.

In the wake of the 1973 Yom Kippur War, the United States gave Israel assurances that it would be able to maintain military superiority in the region and that the sale of advanced weapon systems to Middle Eastern countries will be subjected to Israeli discretion.

These assurances had been observed ever since, until U.S. President Donald Trump had publicly stated his intention to sell strategic weapons to the UAE and Saudi Arabia, but was blocked by Congress after passing an arms embargo last year.