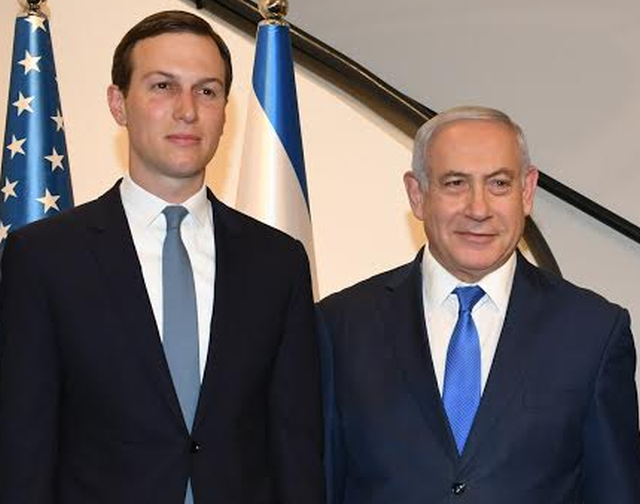 The US Presidential envoy Jared Kushner and American Secretary of State Mike Pompeo are both on their way to Israel for talks. Mike Pompeo leaves on a tour of six Middle Eastern countries today and Jared Kushner will follow a few days later, the NY Post reports. Between them, the two Trump Administration officials will visit Bahrain, Oman, the United Arab Emirates, Qatar, Sudan, and Morocco in addition to Israel.

Jared Kushner and Mike Pompeo are expected to work on finalizing the establishment of formal ties between Israel and the United Arab Emirates. Many in Israel and the United States hope that this is the ice breaker needed to enact a domino effect which will lead to such peace agreements between Israel and other Arab nations like Saudi Arabia and Oman in the future. Businessmen and venture capitalists around the world are salivating at the opportunities.

The voice of America reports that Secretary of State Pompeo is expected to meet with representatives from the Taliban to discuss a possible peace deal for Afghanistan. This could include the withdrawal of American forces from that nation after almost twenty years. The war in Afghanistan has become, by far, America’s longest war.

The $3 billion Secret Security Deals Between Israel and Abu Dhabi

The Voice of America also said that there was no comment from either the White House of the State Department about the trips.

Meanwhile, Mr. Kushner is calling for peace between the United States and Iran. In an interview for VOA program Plugged In with Greta Van Susteren, Kushner called on the Iranian President Hassan Rouhani to negotiate with Washington saying, “For President Rouhani, I would say it’s time for the region to move forward. Let’s stop being stuck in conflicts of the past. It’s time for people to get together and to make peace.” “President Trump is willing to talk. He’s willing to meet, [Iranian leaders] “But … he’s going to be tough,” added Mr. Kushner. “If there is a real deal where nuclear weapons are off the table, and we can make sure that it leads to a more prosperous Middle East, then I believe President Trump would sit and have discussions about it.”

But Jared Kushner has had some problems with the American media, specifically an interview held today, Sunday, with CNN’s Fareed Zakaria. In the interview Mr. Zakaria implied that Israel Prime Minister Binyamin Netanyahu had outsmarted President Trump. He maintained that the deal with the United Arab Emirates was an example of Israel getting something for nothing while a promised new peace plan for the region never materialize.
In response, Mr. Kushner said, “this peace deal is a big win for the whole world. …It’s about people wanting to push back on the people wanting to radicalize the region.” On Israel Kushner said that, “we got Israel to make historic concessions that they hadn’t been willing to agree to in a long time. “
When asked about the sale of F35 jets to the UAE Jared Kushner said that Iran is the most opposed to this, while skirting the question of whether he was personally pushing for the sale.