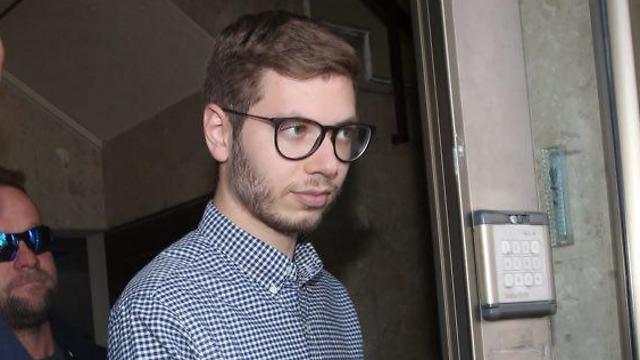 The Jerusalem Magistrate’s Court this morning (Sunday) ordered Yair Netanyahu, the prime minister’s son, to stop “harassing” the organizers of demonstrators calling for his father’s resignation.

Yair Netanyahu, 29, known for his provocations on social media, tweeted the details of the organizers of the protestors in front of the prime minister’s official residence in Jerusalem. He called right-wing fans to harass them outside their homes.

His tweet reads: “I invite everyone to demonstrate, day and night, in front of the houses of these people who organize anarchy in our country.” 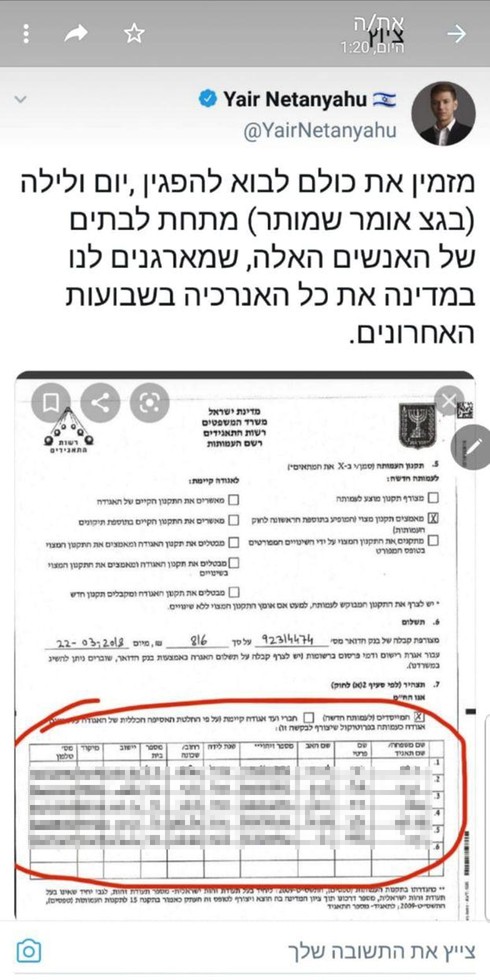 Thousands of demonstrators have been taking place throughout Israel almost every day for weeks calling Netanyahu “Crime Minister” for being indicted in November 2019 for corruption, fraud, and breach of trust in three cases – a first for an incumbent Israeli prime minister.
At first, Yair Netanyahu was supposed to attend the hearing, but this morning he was granted an exemption from appearing. According to him, the leaders of the protest Haim Shadmi, Yishai Hadas, and Adv. Gonen Ben Yitzhak are “a bunch of thugs, unscrupulous anarchists” whose “purpose is to cynically use the court to advance their foreign goals.” A judge ruled that he must be available by phone for any question during the hearing.Several Likud demonstrators gathered outside the court and protested the very existence of the debate. Activist Haim Shadmi came to court accompanied by a security guard.

Advocate Gonen Ben Yitzhak, who represents the “Crime Minister” movement and one of those seeking the order, said at the beginning of the hearing: “We are after a weekend of threats because Yair Netanyahu called on his gangs to come and do justice to us. Even after we applied to order – it did not deter him from continuing to spread the calls.

The judge asked if Netanyahu could delete such comments and Adv. Ben Yitzhak replied that he could remove the tweet and thus delete the comments.

Advocate Yossi Cohen, representing Yair Netanyahu, responded to the allegations: “Yair Netanyahu is not responsible for the responses and condemns them in every language of request. He also suffers from tens of thousands of publications as a result of the activities of organizations such as this organization, which is the most serious and violent and the last that has any right to ask for protection. ”

Advocate Cohen added: “Sitting here is one of the people suspected and interrogated with threats of the assassination of Yair Netanyahu. A person who is dangerous to the public who has been documented rioting with a stick in his hand. ”

Advocate Cohen also claimed that “no injustice was done here that justifies the issuance of an order. There is no doubt that the complete publication is a photocopy of a public document that, according to the Associations Law, not only can it be published but must be published.

“These people are protesting in front of the prime minister’s residence, calling for a demonstration near Minister Ohana’s house. ”

At this point, Judge Dorit Feinstein asked if respondent Yair Netanyahu did not see the difference between ministers and public figures and the applicants.

Justice Feinstein demanded the tweet be deleted and added that Yair Netanyahu must “cease harassing protest organizers for six months and no longer publish their private addresses.”

In reaction, young Netanyahu published a tweet criticizing the judge for not having taken into account “the death threats he received aimed at him.”
His father denounced in a statement “all acts of violence and harassment.”
In this article:Finance, Yair Netanyahu, Anti-Netanyahu protests