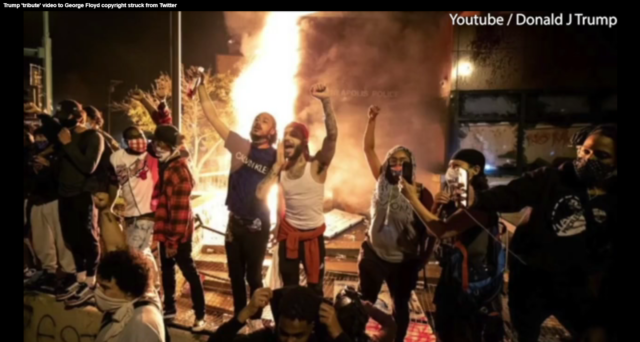 In an on-going feud between Twitter and President Donald Trump that began with the social media platform fact-checking his tweets, today a campaign tribute video to George Floyd was removed due to copyright complaint.

George Floyd died on May 25 in an encounter with Minneapolis police officer. In a video from the scene, a white officer Derek Chauvin was seen kneeling on Floyd’s neck for eight minutes, as Floyd gasped for air shouting, ‘I can’t breathe,’ before passing out. His death has led to nationwide, and even worldwide protests.

The video posted by the president’s campaign account, Team Trump, features a four-minute-long collation of photos and videos of protest march while Trump speech in the background. ‘We support the right of peaceful protesters, and we hear their pleas,’ He says in the background. ‘I stand before you as a friend and ally to every American seeking justice and peace.’

The video shows at first peaceful protests, but it quickly turned to show violence and riots while the President takes aim in the video, at ‘ANTIFA’, an anti-fascist activist group. Trump claims the group, as well as other ‘radical left-wing groups’, are leading the violence.

The video does not show the insensitive tactics that the police have been criticized for when trying to stop the protests.

It is unclear which footage used by Trump’s campaign team has caused Twitter to take the campaign video down from its platform.