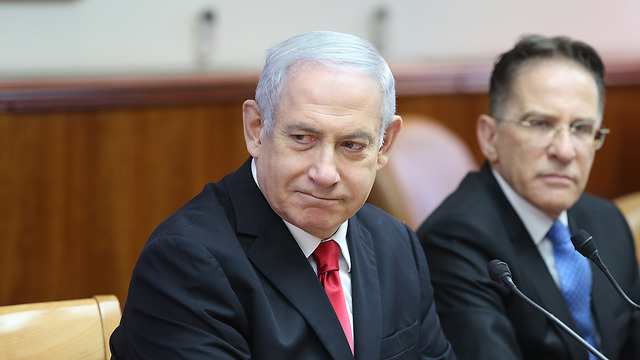 Prime Minister Netanyahu on Tuesday retracted his bid for parliamentary immunity from prosecution on charges of bribery, fraud, and breach of trust.

The Knesset was scheduled to vote Wednesday on whether to proceed with debating the immunity request.

Attorney-General Avichai Mandelblit can now announce the beginning of Netanyahu’s criminal trial, set to be held at the Jerusalem District Court.

Netanyahu called the Knesset debate “a circus” and claimed it was another step in the unfair persecution against him.”

In a statement posted on his Facebook page, the prime minister wrote: “This is a fateful time for the people of Israel, while I am in the United States on an historic mission to formalize the final borders of the country and ensure our security for generations to come, the Knesset is about to begin the circus of removing my immunity.”

Netanyahu also claimed this was further proof of what he called obsessive persecution of him.

“Instead of understanding the importance of the hour, they are busy with petty politics that is harmful to our country,” he said.
After realizing his efforts to block a Knesset vote would not succeed, Netanyahu had been considering retracting his bid to prevent a vote that would have, in his view, caused more damage than good.

The timing of the Knesset debate was set to coincide with Netanyahu’s visit to the White House, which would have led to a “split-screen” situation with the vote on one side and the White House announcement of Donald Trump’s peace plan on the other.
Officials in Netanyahu’s Likud party on Tuesday praised the prime minister for dropping his request.

“Netanyahu did well. The immunity request was detrimental and it would have been better if it had never even been made,” the officials said.

Blue & White leader Benny Gantz said Netanyahu would now go on trial for corruption and voters would have to choose a leader working for their interests and not his own.

Gantz added that no one can run the country when facing such charges.

Labor-Gesher-Meretz leader Amir Peretz called for Netanyahu to end his bid to be re-elected prime minister as well as his bid for immunity from prosecution.

“It’s time for Netanyahu to leave the political arena, deal with his criminal cases and leave us to worry about immunity for those who genuinely need it,” Peretz said.