Following Iranian missile strikes on two U.S. bases in Iraq in retribution for the killing of Iranian General Soleimani, President Trump addressed the public on Wednesday, easing fears of a further escalation in the Middle East. “Iran appears to be standing down,” Trump said in his speech, “which is a good thing for all parties concerned and a very good thing for the world.”

While Trump’s speech was sober enough to calm fears of an all-out war erupting between the two foes, it wasn’t exactly conciliatory either. Trump criticized Iran’s “destructive and destabilizing behavior in the Middle East and beyond”, called the country “the leading sponsor of terrorism” and defended his decision to liquidate Soleimani (“the world’s top terrorist”). He went on to announce additional economic sanctions against Iran, although these sanctions remain unspecified as of yet.

Iran’s economy has been heavily sanctioned for years, with the nuclear deal signed in 2015 bringing brief respite to its crippled economy. Following the U.S.’ withdrawal from the deal and the subsequent reinstatement of sanctions in 2018, the country fell into a deep recession again as the sanctions succeeded in drying up Iranian oil exports.

As the following chart shows, Iran’s GDP shrank by 9.5 percent last year according to IMF estimates. For 2020, the IMF expects the Iranian economy to stabilize, although it needs to be said that this projection was published in October, i.e. before recent escalations. Trump ended his speech by urging the other parties to the 2015 nuclear deal to withdraw from the agreement and start working on “a deal that allows Iran to thrive and prosper and take advantage of its enormous untapped potential”. 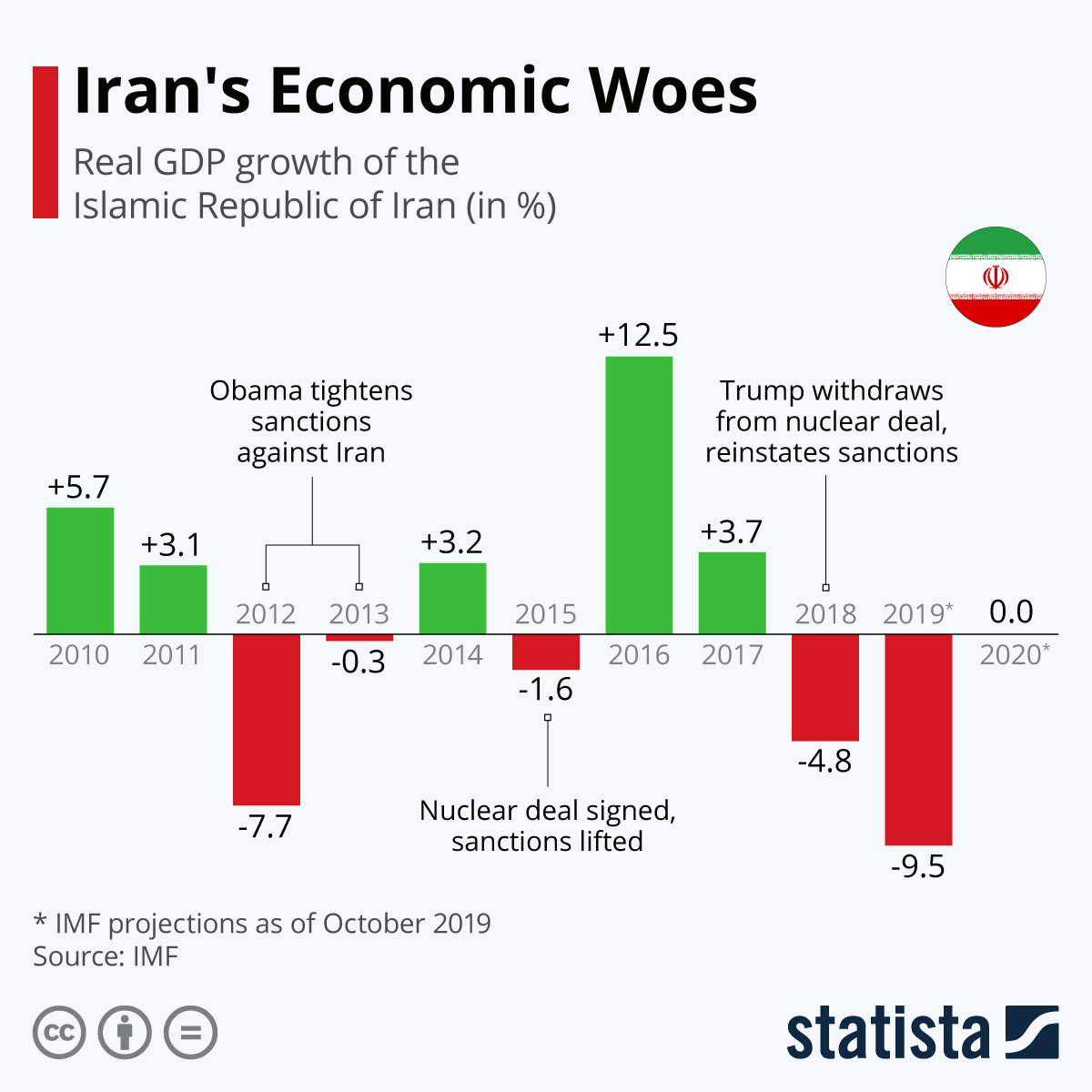 Growth of the gross domestic product of Iran 2024

Iran’s gross domestic product (GDP) declined by 4.85 percent in 2018 after adjusting for inflation. This figure fell from 12.5 percent growth two years ago, which had been a reaction to sanctions lifting after the Joint Comprehensive Plan of Action (JPCOA) regarding Iran’s nuclear program. United States president Donald Trump ended that country’s participation in the deal, imposing new sanctions.

Political influence on the economy

Political tensions have hampered Iran’s economy, keeping growth low in spite of the country’s considerable oil reserves. The effect of these sanctions becomes obvious when looking at Iran’s oil exports to Europe over the past decade. Some analysts have blamed the new sanctions for the increase in Iran’s inflation rate, as well as the currency depreciation that has accompanied it.

Although Iran’s main export partners are largely in Asia, many of the transactions are carried out using U.S. dollars. Even though other means of payment are possible, some countries worry about political ramifications of continuing trade relations with Iran. Iran’s greatest strength at the moment may be its low national debt, meaning that it can borrow a substantial amount of money if it can find a willing lender. However, given the instability of the political situation worldwide and regionally, it is difficult to assume that such a borrower exists at the moment.