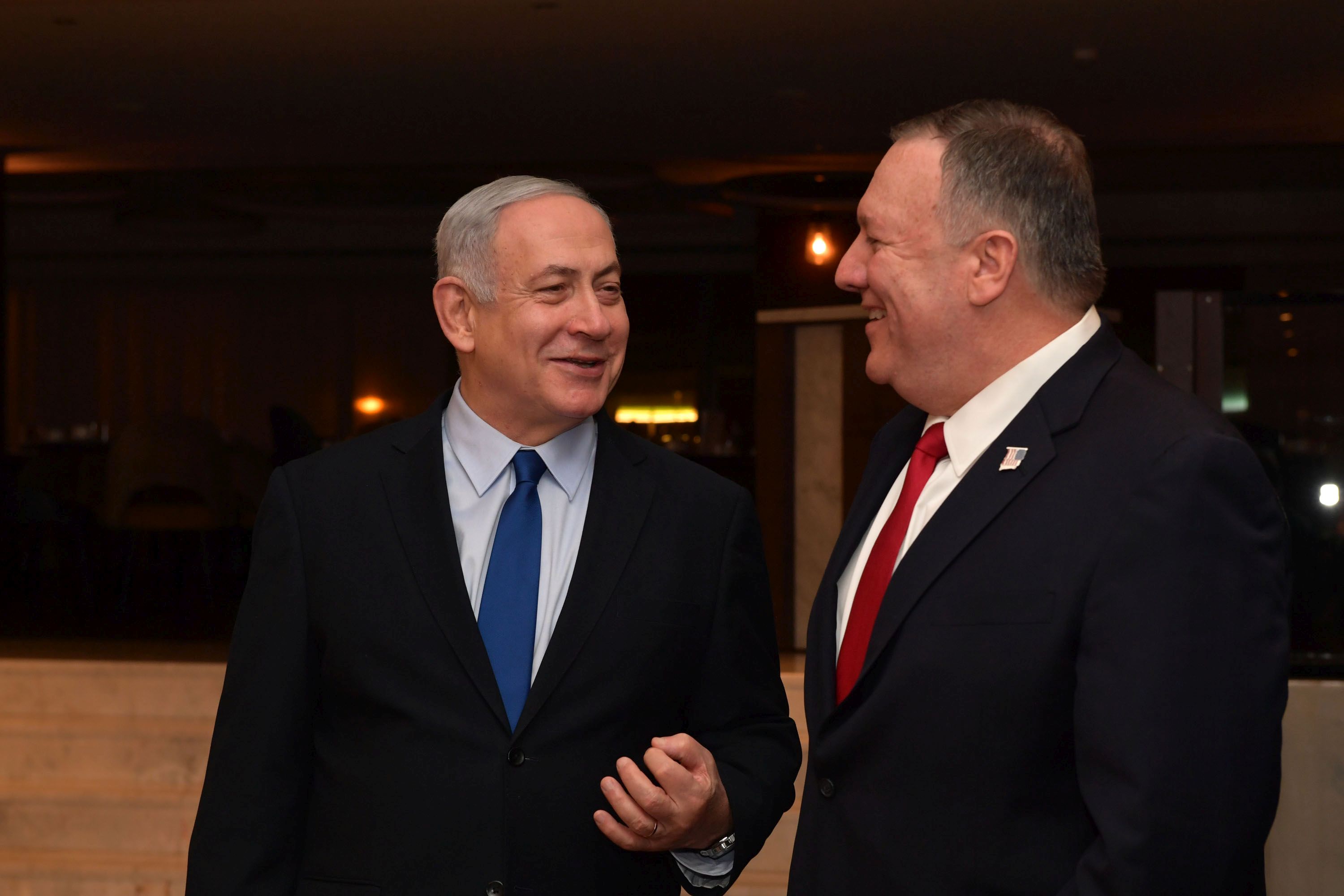 PRIME MINISTER NETANYAHU: Yes. So I’m delighted again to see Secretary Pompeo. The first subject that I will raise is Iran, the second subject is Iran, and so is the third, and many more. But I think that we have been fortunate that President Trump has led a consistent policy of pressure against Iran. Iran is increasing its aggression as we speak even today in the region. They’re trying to have staging grounds against us and the region from Iran itself, from Iraq, from Syria, from Lebanon, Gaza, and Yemen, and we are actively engaged in countering that aggression. And I think that the Israeli-American cooperation is key to that effort that I think serves the purposes of the many, many countries in the region. That will be the first subject that I will raise, including the ability to strengthen even further our mutual defenses.

I am very grateful to you, Mr. Secretary, for the statement by the State Department that settlements are not illegal. I think contrary to every common spin this actually advances the cause of peace because peace has to be based on truth and not on lies. And we are committed to advancing security, prosperity, and peace in our region, and I believe this conversation on these and many other subjects will do exactly that. So thank you (inaudible).

SECRETARY POMPEO: Thank you very much. I appreciate it. I’ll just add we do have a number of things to talk about. I just flew in from being with the President in London where in each of the meetings we had one of the central topics was how to create Middle East stability in this time where there are anti-Iran protests taking place in Baghdad, anti-Iranian protests taking place in Beirut, and we all know what’s going on in Iran. Some of these are people that are seeking freedom and a reasonable way to live, and they recognize the threat that is posed by the kleptocrats that are running the Islamic Republic of Iran.

So we talked to our European partners about that and how we can together ensure that we do everything we can to create opportunity for these people who simply want freedom and a chance to live a normal life. So I look forward to talking to you about that and a handful of other things today as well.

PRIME MINISTER NETANYAHU: Thank you. You took the words out of my mouth actually, because I think the – Iran’s aggression is growing, but its empire is tottering. And I say let’s make it totter even further.

QUESTION: Sir, on Iran. Mr. Prime Minister, on Iran. There are reports as we speak of airstrikes in eastern Syria. Did you authorize these strikes tonight?

PRIME MINISTER NETANYAHU: I don’t talk about that.

PRIME MINISTER NETANYAHU: I think ever since President Trump took office, there has been a marked change in policy towards Iran, to counter its growing aggression with growing pressure. And I think that’s what has to be done. And I – I’ll just say I excoriated six European countries that are – instead of joining the United States as the people in Iran and in Lebanon and in Iraq rise up against Iran and its aggression and (inaudible). They are trying to sidestep the sanctions that the United States under President Trump (inaudible). That’s the wrong thing. The President is doing the right thing.

QUESTION: Secretary Pompeo, what is your position on annexation of the Jordan Valley?

QUESTION: Will you discuss a mutual defense —