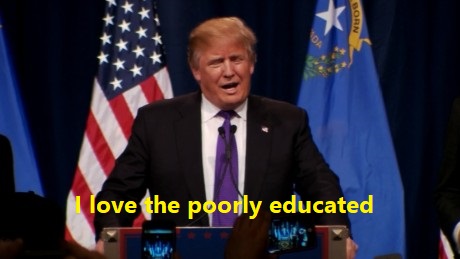 “To them, I said, the truth would be literally nothing but the shadows of the images.”[1]–Plato, The Republic

For US President Donald J. Trump, policy making by imposed chaos has become normal. Again and again, we see that this president’s decisions are founded upon manipulation and contrivance; inevitably, his choices(both conspicuous and inconspicuous) injure American interests and ideals….and at the same time. Should they be left insufficiently opposed, such injuries will impair the most rudimentary expectations of American national security and international justice.

There is more. These markedly grave impairments continue on several intersecting (and sometimes synergistic) levels. Most ominously, there have been satellite images confirming that North Korea is moving ahead aggressively with its ballistic missile program. As corollary, we may now also learn, prima facie, that Mr. Trump’s earlier reassurances about “peace” with North Korea were not merely silly fabrications, but also deliberate falsifications. Prospectively, there are corresponding nuclear consequences for America’s close allies in South Korea and Japan, some of them potentially existential.

“We fellin love,” said Trump after first meeting Kim Jung Un in Singapore a few years back. But by the most basic standards of prudent policy-making, any such alleged “romance” must remain beside the point. In any event, as the recent and recurrent missile tests by Pyongyang reveal, Trump’s declared love is glaringly unrequited.

Credo quia absurdum, warned the ancient philosophers.  “I believe because it is absurd.” With great deliberateness, systematically, this president studiously avoids any knowledge-based judgments. Another recent example is Trump’s blaming of California “mismanagement” for the raging wildfires in that state (“They should have raked….”). The president also abrogated this country’s legal obligations under the INF treaty, a destabilizing termination that has already shattered codified American promises at international and domestic legal levels, This is apt to be followed by US rejection of New Start treaty obligations.

Of course, even before launching this particular presidential assault on legal order, international law and national law, Trump formally withdrew the United States from the July 2015 Iran deal (the JCPOA), a multilateral agreement that the UN’s IAEA had several-times reaffirmed was being respected by Tehran.

There are, to be sure, all-too-many additional examples of US President Trump undermining America’s indispensable legal and moral obligations. All of these examples, some of them plausibly irrational, reflect the unsupportable core assumption that “attitude, not preparation” is what matters in diplomatic negotiations. For some unimaginable reason, moreover, Jared and Ivanka (the president’s “hidden geniuses” according to Trump’s previous UN ambassador) have not yet been able to fashion an impressively coherent plan to save the Middle East.

What a surprise. Naturally, we are routinely advised, the failure must be someone else’s fault. Perhaps Hillary. Using Trump “logic,” that conclusion would seem to be a frequent and generally applicable remedy.

There is more. A self-declared “very stable genius,” US President Donald Trump still wages a bewildering war against his own intelligence agencies and national legal institutions. What remains detached from any competent national assessment is Trump’s underlying abhorrence of intellect and learning. Should anyone doubt this perilous loathing, one need just “tune in” to the latest presidential “rally.”

“I love the poorly educated,” intones Trump to his assembled acolytes.

Not much erudition here; just a cultivated incoherence.

Donald Trump is no scholar. To be fair, no one should ever have expected anything else. But this president is notoriously weak on most vital matters of law and justice, so much so that he believes manipulating US foreign aid to injure his domestic political foes is altogether reasonable and permissible, whatever the deleterious effects upon another state’s most vulnerable populations. A conspicuous case in point is the extortion-like leverage seemingly exerted against an already-fragile Ukraine.

Unsurprisingly, this particular Trump dereliction was intended to benefit not only the American president himself, but also his regularly and strangely venerated Cold War II “rival,” Vladimir Putin.

Though not generally known, international law remains an integral part of the law of the United States. Inter alia, among other authoritative sources, it says this explicitly in the Constitution, the very same document that Mr. Trump’s supporters are fond of citing in their recurrent reverential references to “gun rights.” Various express codifications can be discovered at Article 6 (the “Supremacy Clause”) and at certain corresponding U.S. Supreme Court decisions (see particularly the Paquete Habana, 1900 and Tel-Oren vs. Libyan Arab Republic, 1981).

There is more. Article 6 of the US Constitution clarifies that “…all treaties made, or which shall be made, under the authority of the United States, shall be the supreme law of the land….” The United States is party to the 1951 Refugee Convention, which contains (at Article 33) the basic principle of non-refoulement:  “No Contracting State shall expel or return (“refouler”) a refugee in any manner whatsoever to the frontiers of territories where his life or freedom would be threatened on account of his race, religion, nationality membership of a particular social group or political opinion.”

Nonetheless, from the beginning, under Donald Trump’s fitfully-released and often self-contradictory executive orders, impermissible expulsions and returns have become “official” policies of the United States. Earlier, “ground-zero” for such evident presidential manipulations had been the refugee “caravan” and its alleged “invasion.” At that time, Trump not only ignored Russian-Iranian-Syrian war crimes, but openly praised the principal architect of these derelictions, Vladimir Putin.

There is more. Most recently, against the wishes of his most senior military, Trump issued pardons for certain US soldiers accused of egregious war crimes. Among other derelictions, these pardons undermined the peremptory expectations of the laws of war or humanitarian international law. By definition, therefore, they also represented stark violations of duly “incorporated” US law.

Still, despite his serious violations of US and international law, Trump is not the genuinely underlying “pathology.” Rather, his law and government-violating presidency is“merely” the symptom of a much wider and more deeply systemic disorder. This disorder is an insistently anti-intellectual American society, one that frowns upon virtually any original expressions of logical explanation or independent thought.

When the infant children of desperate refugees were being housed in cages, this president, tanned and bemused, journeyed to Florida or New Jersey foryet another round of golf. Significantly, though generally unknown to Americans, the due process clauses of the US Constitution protect all “persons,” and not just “citizens.”  Jurisprudentially, this authoritative scope of competence – one drawn from fully invariant Natural Law or Higher Law bases of the American Republic – is “beyond legal question.”

In life and law, truth is exculpatory. Derivatively, we are not witnessing a normal and law-abiding American presidency. Accordingly, we must now finally inquire:”Is this an excusable and remediable legal deformation, or is it rather an execrable dress rehearsal for astill-widening chaos”?

It’s high time for candor. What Donald Trump values most in both national and international politics is chaos.  A deeply troubling affection, it is impossible to reconcile such curious affections with even the most rudimentary legal expectations of US government or law.

At very basic levels of explanation, Trump’s feverishly loyal supporters, who still number in the tens of millions, yearn for the tangible warmth of “belonging, ” of being part of a perpetually shrill and shrieking crowd, of enjoying the numbingly false pleasures bestowed by deceptively simplistic explanations. Always, after all, complexity is anathema to those who loathe serious thought. It is excruciatingly daunting for those who would reject intelligence and intellect in virtually any form, whether by offering loud belligerent chants or more cautiously, softly, almost sotto voce.

“I love the poorly educated,” offered candidate Donald Trump during the 2016 US presidential campaign.

These crude sentiments are not altogether dissimilar. Palpably, though many years apart, they still resonate warmly with each other, across the years. Inter alia, both display a species of “truth” that corrupts absolutely any hint of history or science.

This truth is “literally nothing but the shadows of images.”

[1] Plato’s theory, offered in the fourth century B.C.E, seeks to explain politics as an unstable realm of sense and matter, an arena formed and sustained by half-truths and distorted perceptions.  In contrast to the stable realm of immaterial Forms, from which all genuine knowledge must be derived, the political realm is dominated by the uncertainties of the sensible world.  At the basis of this political theory is a physical-mental analogy that establishes a correlation between the head, the heart and the abdomen, and the virtues of intelligence, courage and moderation.

This article was first published in Modern Diplomacy