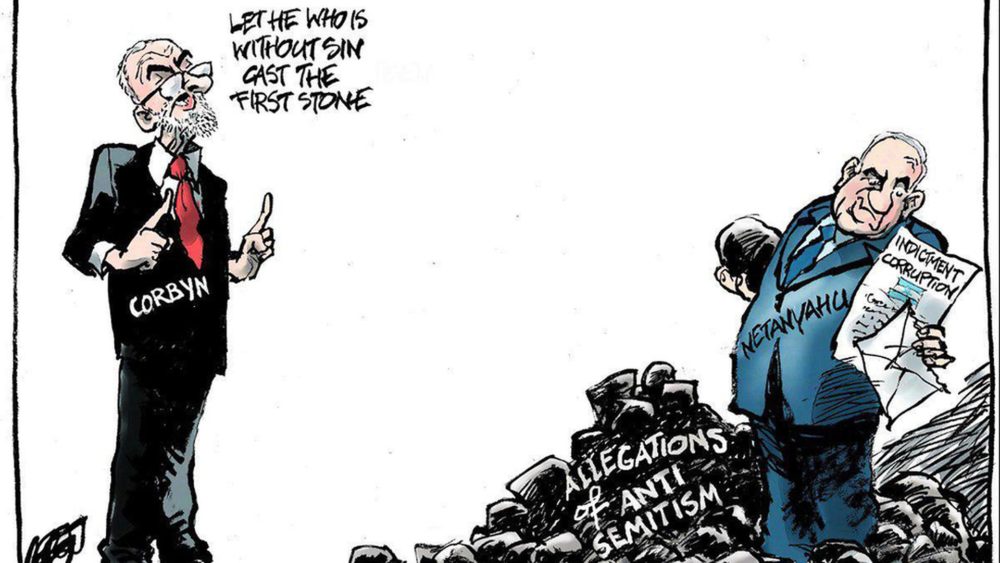 The Dutch daily newspaper “de Volkskrant” on Thursday published a political cartoon accusing Prime Minister Benjamin Netanyahu as being behind allegations of anti-Semitism directed at the head of Britain’s Labour party Jeremy Corbyn, in order to divert attention from his own criminal indictments for corruption.

The caricature shows Netanyahu holding a stone in one hand from a pile labeled “Allegations of Anti-Semitism.” On the other hand the prime minister is holding his indictment charges. Corbyn is seen quoting Jesus in the New Testament.

The Center for Information and Documentation Israel (CIDI), a Dutch-based pro-Israel organization dedicated to combating antisemitism in the Netherlands chided the newspaper for the cartoon.

CIDI stated that in contrast to the cartoon’s insinuation, British Jews are the ones blaming Corbyn for his anti-Semitic rhetoric and not Netanyahu.
“Jews have the right to speak out against anti-Semitism,” stated CIDI.

“The fact that the Israeli prime minister is involved in a criminal case does not change that. The caricature recycles anti-Semitic stereotypes that would secretly be more loyal to Israel than the countries where they live.”

The creator of the cartoon, Jos Collignon, admonished the ambassador for accusing him of anti-Semitism.
Collignon defended his cartoon and said the CIDI was responding in such a way due to the trauma Dutch Jews feel as a result of the Holocaust.