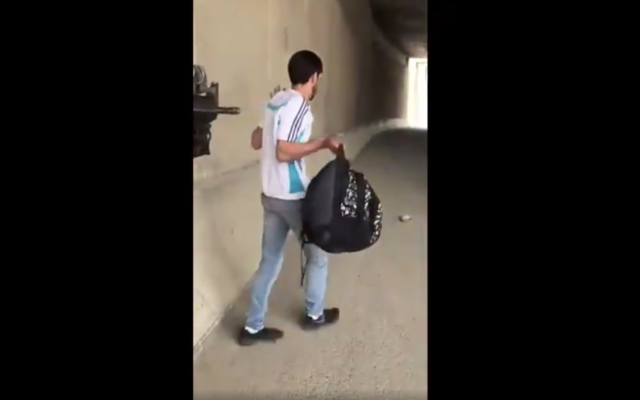 Israeli Channel 13 published on Saturday evening footage of a Border Police officer firing a rubber bullet at Palestinian who was walking away with his hands held up.

While the Palestinian holding ID card raises in his hands and carrying a backpack the officers shouting at him to leave the premises, in a tunnel road in the West Bank.

With their automatic rifles pointed at his back, the man begins walking away from them down the tunnel. Towered the end of the way the officers called him to drop his hands. But the Palestinian appears to not completely understand what they are saying and briefly turning around before complying with the order – at this point, one of the officers shoot him in the back.

It is not known the extent of the injuries to the victim.

Channel 13 published the story on Twitter saying: “Tonight in the Saturday edition on @ newsisrael13 we will bring exclusive documentation of one of the Border Fighters firing a sponge ball at a Palestinian who poses no danger

In a statement, the Border Police said that it sees the event “with great severity” and clarified that the incident had taken place about a year and a half ago.

The Border Police add that the officer who fired the bullet was immediately kicked off the force upon the incident, and she has returned to the IDF where she is completing her mandatory service. The other officers involved in the incident were also punished. Some of them being transferred to other units, according to Border Police

The police continue the internal investigations of the incident.