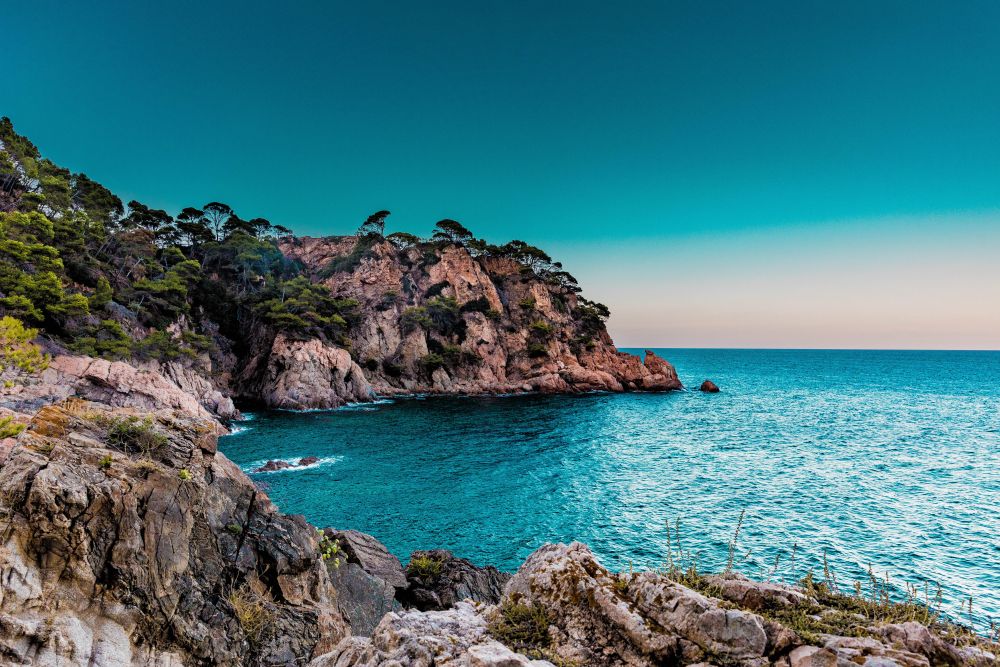 Summer is around the corner, which means it is time to start planning where to spend this wonderful season! This article is for those who have fallen in love with the country while on holidays, and are now thinking to purchase their own property by the sea.

Let’s talk about Europe with its Mediterranean, Adriatic and Aegean seas, and review the top five summer destinations of 2018, which, according to most forecasts, will be at the peak of popularity in 2019.

The climate of this sunny country is one of the mildest in Europe (more than 3,000 hours of sunlight per year), while the winters are short. The swimming season begins in June when the water temperature reaches 19-21° and lasts all the way until October. The sea is especially warm (about 25°) and enjoyable during the last few months of the summer. According to Trekksoft, overall, 82 million tourists visited Spain in 2017.

In 2018, residential property prices in Spain rose by 6.49% compared to 2017 and amounted (on average) to €1,493 per square meter, and they are expected to grow by 5-7% this year. Meanwhile, the yield from residential property rent in Spain comes to 4-5%. Foreign investors have the right to buy and resell any types of real estate without restrictions.

The demand for property in popular resorts is rather high, however, it’s still possible to buy property in Spain for €50,000, or a country house for €150,000. Studies by the National Statistics Institute (INE) show that property sales in the country have increased by 10.6% towards the end of 2018, compared to the same period last year. The growth in the number of transactions was largely down to mostly Brits, French, Germans, Belgians, Italians, and Swedes buying villas on the coast. Barcelona and Costa del Sol were the leading locations.

Barcelona, an attractive and multifaceted capital of Catalonia. City beaches and Michelin restaurants are right next to the museums, palaces, and cathedrals, while dark Gothic facades harmoniously match the bright buildings of the modern era. Prices per square meter in Barcelona fluctuate around €5,000. The yield from the apartment rent or a short-term lease is 4-5%, but such rent is possible only with a license. The profitability of a long-term lease is around 2%.

High taxes and relatively low returns could scare off potential investors, however, according to Global Property Guide assurances, the attractiveness of the country for expats and the purchasing power, which keeps one of the highest rental rates in the city among European countries should be taken into the account. The influx of tourists causes the demand for apartments to rise not only during the peak of the beach season but throughout the year.

Costa del Sol is a real gem among British real estate hunters. No wonder! It is a region with Europe’s finest golf courses and marinas, modern luxuries complemented by the stunning architecture. Sandy beaches are spread across 160 kilometres. Every year, 13 million people visit this coastal resort.

The price range is as diverse as are the preferences of tourists. A 2-bedroom apartment in Malaga, the largest city on Costa del Sol goes for €105,000. The average price per square meter is around €1,900.

Another city that shouldn’t be overlooked is the rapidly developing Torrevieja. The World Health Organization has recognised its climate as one of the healthiest in the world, partly because of the salt lakes located there. The Pink Lake of Torrevieja is one of the main attractions in the south of the Costa Blanca.

Torrevieja is known as one of the best places to buy or rent property in Spain. The landscape around the city is mostly flat, with long sandy beaches. An inexpensive 2-bedroom apartment in Playa del Cura of ​​80m2, located near the beach, will cost around €75,000.

Sunny, hospitable, popularly priced. The crystal clear waters of the Mediterranean, fantastic beaches, friendly locals and a sensation of the history coming alive, this is Greece we’re talking about here. Once troubled, but now the tourism figures here have reached a 10-year high. The country was visited by 27 million people in 2017, and during the 11 months of 2018, this number increased further, by 29%.

The secondary housing market in Greece is on the rise, buyers (British, French, Germans, and Scandinavians, as well as residents of the Middle East, India, Israel, China, Russia, South Africa, and America) took advantage of the falling prices following the 2010 debt crisis, as well as the attractive ‘Golden Visa’ programme. Participation in it allows buyers who have invested anywhere from €250,000 into the real estate to apply for a residence permit and, subsequently, for a Greek citizenship.

Athens is the birthplace of Western civilisation, the live legend of the creation of art, and beautiful at any time of the year. According to the PwC research, for 2019, the capital of Greece will be ranked 14th in terms of the most active and promising real estate markets in Europe.

The house/flat price in Athens city centre in the centre of Athens average at €1,500 per square meter in the first half of 2018. At the same time, these prices are growing faster than the national average (about 0.4%).

According to Tranio experts, housing renovation projects are particularly favourable in Athens, promising investors a return of about 15%.

Crete is popular among investors due to good offers of affordable properties since it is one of the best islands for a year-round living and family holidays. July is the hottest month (average temperature 26°C), while January is the coldest (11°C). The swimming season starts in June, and the sea remains warm until November.

Low operating costs for landlords and a stable rental income are due to the fact that 60% of buyers look to rent their properties out. The cost of apartments in Crete is about €1,400 per square meter and villas come to around €2,500.

A country with a varying landscapes and rich history. Summers are warm and sunny, yet not hot (around 20°C), winters are quite comfortable (+4 to +10°C). The holiday season lasts from May through to October. Because of the ocean currents, the water is somewhat cool. To the south of Lisbon, it gets warmer by 2-3°C.

Portugal and its capital, attract more and more tourists and investors every year. Countryside real estate in the central part of Portugal has become a good and affordable alternative to the rural France and Italy. Statistics show that 10% of the inhabitants of small Portuguese villages are British pensioners. According to the PwC analysts, in 2019 Lisbon will lead the ranking of cities that are most attractive for real estate investors. The Statistics Portugal (INE) reports that property sales for Q1-Q3 in 2017–2018 increased by 19% in Portugal and by 22% in Lisbon.

Lisbon is one of the few European capitals which can boast to have own beaches, some of which have been awarded the blue flags of the European Union for their excellent ecology. The sun shines over the city and its people for around 300 days a year. According to the forecast by the Royal Institution of Chartered Surveyors (RICS), the growth in real estate prices will continue over the next five years and will be approximately 5.5% per year. The average rental yield is 5%. At the same time, the services of management companies cost 5–10% of the rental cost (in other European countries the figures are higher at 20–25%). The average price per square meter in Lisbon is €3,000-€4,000 for old buildings, €5,000-€7,000 for the new ones and about €10,000 for those located in the city centre.

Algarve’s Carvoeiro beach proudly holds the title of the best beach of 2018, according to the European Best Destinations platform. The centre of the southern coastline of Portugal offers everything one needs for a first-class holiday, while the proximity of the major airport (Faro) makes this area especially accessible for tourists. Within a few-minutes of driving from the best beaches in the city, you can buy budget 2BR apartment of around 100m2 for a budget of roughly €130,000. In general, small apartments are priced at about €230,000, villas and townhouses about €300,000.

In August 2018, the Turkish economy survived one of the strongest economic shocks, which have come about due to domestic and foreign policy factors, when the lira exchange rate fell by 30%. This led to the strongest inflation in the last 15 years, which reached 25%. Yet, due to a fall in the price of the currency, the year 2018 was a success for the tourism sector – in 10 months the number of foreign tourists exceeded 35 million people.

In an effort to attract foreign investors, the Turkish government eased the conditions of the ‘golden visa’ program (the entry threshold is now €250,000 instead of €1M as it used to be), as well as exempting investors from paying VAT when buying the first commercial or residential property, which, however, cannot be re-sold within that year. According to the Turkish Statistical Institute (TurkStat), last year, foreign investors bought 39,663 premises in Turkey (17,663 more than in 2017).

Residential property is being bought both for recreation and for the rental business since Turkey’s real estate can bring anywhere up to 8-12%.

It is Italy that in recent years has demonstrated the highest tourist flow among the five leading European countries. As such, in 2017, 58.7 million people visited the peninsula (by 11.8% more than in 2016). The Italian national tourism agency, ENIT, reports that tourists from Germany play a leading role in the development of the country’s tourism sector (they contributed €6.6B to the country’s economy, exceeding the 2016 figures by 14.7%) from Switzerland (€6.1B), the United States (€4.5B), France (€3.9B) and England (€3B). The trendy ethno-gastronomic tourism attracts visitors to Tuscany, Piedmont, Sicily, Emilia-Romagna-Veneto, Umbria and Apulia. According to the estimates by the Institute for Tourism Studies in Italy (Isnart), the economic effect of the agritourism expenses of tourists vacationing in the country is more than €12B annually.

Things are not as simple in the real estate sector though. Harsh consequences of the financial crisis and the introduction of the Tassa sui Servizi Individualisibili (TASI) real estate tax continue to affect the country. Housing prices fell by 13.5% from 2011 to 2014, and have not yet fully recovered. According to Idealista.it, in 2018, property in cities got more expensive, while cheaper in the countryside. During Q1 2018, the sharpest drop in prices was observed in the Marche region (-6.5%). At the same time, for cities, the highest price spike was recorded in Prato (about 6.5%) and Florence (2.3%).

Rome, of course, is the pearl of Italy. The swimming season lasts from June to October, and no vacation is enough to enjoy all the sights of this city and its surroundings. Therefore, despite the economic or political difficulties, the demand for housing here does not fall. Rental profitability in Rome ranges from 2.4% to 4.5%, slightly higher for small apartments. Property in Rome, in the rich suburbs of the capital cost an average of €4,400 to €4,900 per square meter, in the historic centre the price rises to about €8,000.