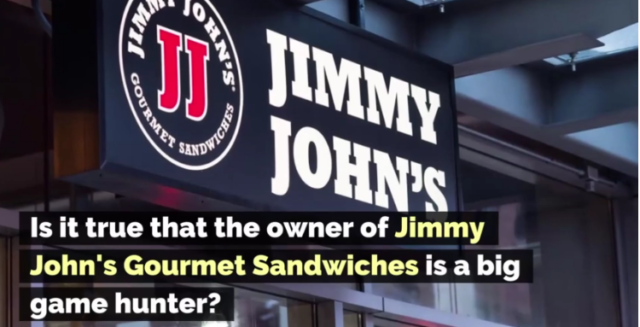 Only jerks give two thumbs up after murdering a peaceful animal in their home.

This is the CEO of @JimmyJohns over the body of an elephant he killed.

Use the viral hashtag #BoycottJimmyJohns to spread the word that KILLING ANIMALS IS NOT A SPORT! https://t.co/wTnWCAC1rE

The photo of the founder and CEO Jimmy John Liautaud, giving a thumbs up while sitting on top of a dead elephant was published in April, but now was resurfacing. According to Snopes, photos of the CEO posing with dead “trophy” animals started back in 2011.

This is your reminder that Jimmy Johns are not only disgusting sandwiches. #boycottjimmyjohns pic.twitter.com/2ybH3okdiI

Although big game hunting is legal in some countries, it has often been a source of controversy due to potentially endangered animals. Especially after “Cecil” the lion’s death on July 2015.

The anger of that day has waxed and waned over the years but hunting photos have sporadically resurfaced.