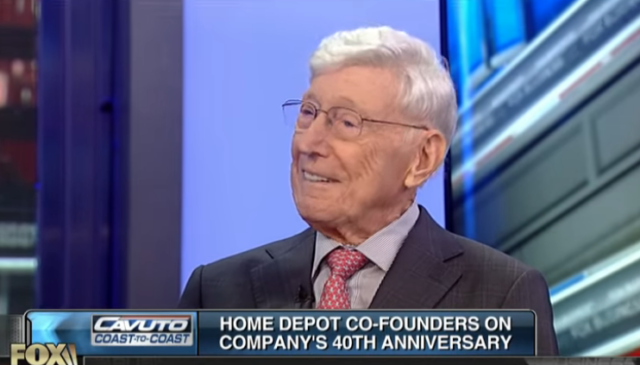 Home Depot co-founder Bernie Marcus, 90, said in an interview that he intends to back President Donald Trump‘s 2020 re-election – and the chain store he left in 2002 now facing boycott calls.

The interview published over the weekend in the Atlanta Journal-Constitution. Marcus said he admired Trump for holding “a businessman’s common sense approach to most things.”

He added: “Now, do I agree with every move that he makes? No, I don’t. But the truth is he has produced more than anybody else. He has,” Marcus explained. “If we look at this country, I would say that we are better off today than we were eight years ago or six years ago.”

A hashtag #BoycottHomeDepot quickly began spreading on Twitter Tuesday, with many users saying they would turn to Home Depot competitor Lowe’s instead.

The billionaire former executive has reportedly contributed $7 million to Trump’s 2016 campaign. He also donated large sums to many philanthropic causes.

I don’t understand this #BoycottHomeDepot thing to be honest. The CEO is using his own money and it’s his choice to support who ever he wants. I thought the left preached tolerance? Oh that’s right they are only tolerant when your views aline with theirs.

Not a carpet, or a washer, or a mousetrap from Home Depot. Not a dime of my money will go directly to re-electing the worst president ever. #BoycottHomeDepot https://t.co/CHJ86Nspnf

Liberal boycotts are a joke, just like liberals. The best thing for your business is a liberal boycott. Your sales will explode after lunatic libs announce their “boycott.” Just ask Chick-fil-A https://t.co/OtYXqozGUa

If you want to #BoycottHomeDepot knock yourself out, but if you are planning on boycotting every big business with a CEO who donates to Republicans you’re going to have to start making a lot of your own stuff.

In this article:Home Depot, Finance, Boycott