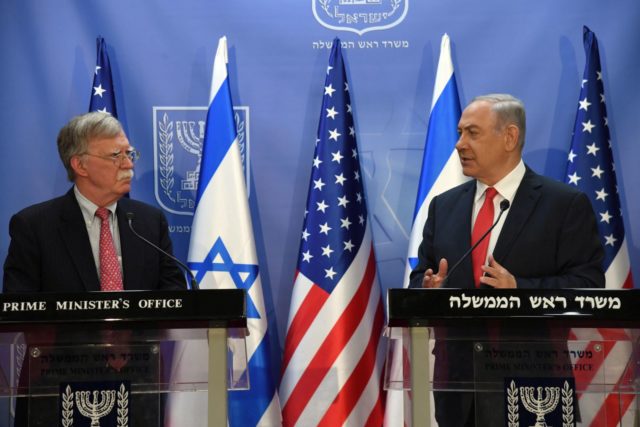 Prime Minister Benjamin Netanyahu met today with National Security Advisor John Bolton, who arrived in Israel this weekend for the first time since tension in the Persian Gulf following the downing of the American UAV.

Bolton said that the meeting was an opportunity to strengthen cooperation between the United States, Israel, and Russia. Bolton said that Trump was expected to meet with President Putin in Japan: “Iran aspires to produce nuclear weapons and develops the capabilities of the Revolutionary Guards, and no one has granted Iran a hunting license. It transfers missiles and weapons to Iraq, Syria, Lebanon, Yemen, and Afghanistan – and continues to threaten Israel and our allies aggressively in the Gulf states. The signs show that Iran is not a nation that seeks peace.”

Bolton added that “Iran, and any other hostile country, can not see the United States as a weak state, as the president said on Friday – our army is ready for action … do not confuse caution with weakness … We imposed sanctions last night and soon I hope there will be news. There will never be nuclear weapons, not against the United States – and not against the world. ”

Netanyahu thanked Bolton for his visit and said “Iran has been carrying out a campaign of terror and aggression in the region for a long time, when the sanctions were lifted because of the nuclear agreement and the money began to flow, the aggression from Iran increased, the supporters of the nuclear agreement said that the money flow would make it moderate, – are wrong.”

Ahead of their meeting with Russia’s national security adviser Nikolai Patrushev, Netanyahu added “I want to thank you for the historic summit between the national security advisers and the pressure … The fact that there is such a conference in Israel shows our status, I hope the discussions will be effective and good and we will find a way to stabilize the situation,” Netanyahu said. Especially in Syria. ”

Senior security sources expressed concern that a weak response to provocations by Iran would cause the Iranians to escalate the situation and even step up, noting that “the Iranians reached the conclusion that President Trump is not interested in war, and therefore they are ‘on the brink’.” In addition, there is fear of a military confrontation between the United States and Iran, during which Israeli targets will be hit.

In Jerusalem, they do not want to be seen as pushing the United States for military action against Iran. Therefore, it is very important for Israel to maintain full coordination with the Americans regarding the continuation of the steps required to curb Iranian aggression in the region, especially in Syria.

Netanyahu stressed that this is an important step in securing guarantees for maintaining stability in the Middle East and said that “what is important about the joint meeting of the two powers in Israel is that it attests to Israel’s status in the international arena.”