The American Air Force One is perhaps the most famous aircraft to serve American officials, but the real control center is an old-fashioned airplane that looks like outside but inside is equipped with technology from the 1970s – and all this to Which could survive in the event of a nuclear attack.

There is apparently no aircraft similar to the E-4B of the US Air Force. The plane, dubbed “Doomsday”, is an upgraded Boeing 747 that serves the US Secretary of Defense. It is almost six stories high and is equipped with four huge motors. “It’s like a backup Pentagon,” a US Air Force official told CNBC. “There’s always one such plane on standby, 24/7.”

Last week, US Defense Secretary Patrick Shanahan boarded the plane at the Andrews base in Maryland for his second international voyage since he was appointed to replace James Matisse, who resigned over disagreements with President Donald Trump. Shanahan, who last month announced his intention to be appointed to the post on a regular basis, served for 30 years in various positions at Boeing, the maker of the plane.

The E-4B, also known as the Airborne Air Operations Center, flew their hosts and crew to Hawaii, Indonesia, Singapore, and South Korea, and the next and final stop in the journey in Japan. The pilots said that during the eight-day voyage, the plane would pass 41,740 kilometers with the help of three airlifts and six refueling planes.

“That’s great, but they keep giving me more work,” Shanahan laughed when he talked to CNBC about work on an E-4B flight. “The work never ends,” he said, adding that while on the plane he could track US operations around the world. “In fact, this plane is an air control center,” the Pentagon spokesman said. He noted that the Secretary of Defense could use the most classified communication systems on the plane, and in the media not classified. “That’s how he’s always in the loop,” the spokesman added. 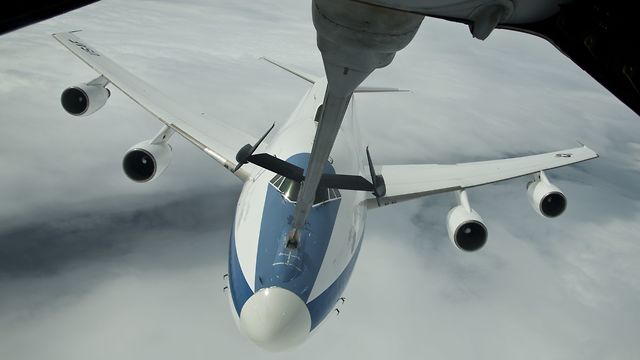 Like Air Force One, many of the capabilities of E-4B are also confidential. Today there are four such unique aircraft in the US Air Force. The identical planes, based in Nebraska, have been in operational service since 1980 and are expected to end their service in 2039.

The “hump” on the upper part of the plane is known as the Radom, which houses more than 67 satellite dishes and antennae in the plane, which is one of the elements in the plane’s “communication bag” that gives it the ability to communicate with ships , Submarines, airplanes and stationary telephone lines, anywhere in the world.

Thanks to the possibility of air refueling, and the huge fuel tanks of the aircraft, it can stay in the air for several days in a row. The plane seats up to 112 people, has 18 bunk beds, six bathrooms, a kitchen, a briefing room, a conference room, a command room, and an executive area.

Unlike Air Force 1, the interior of the E-4B is outdated and almost windowless. Electronic components and flight indicators are mostly obsolete. “This is a common mistake, but this plane has no digital screens in the cockpit or anywhere else, and digital technology will be ‘fried’ in a nuclear war,” said a crew member. CNBC explained that the analog technology of the plane is less damaging to the electromagnetic pulse after a nuclear explosion.