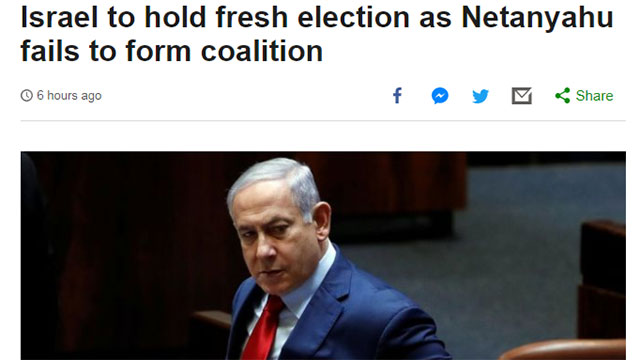 BBC: “Netanyahu’s government may have entered the last stages”

The fact that Prime Minister Benjamin Netanyahu failed in an unprecedented attempt to form a new government and decided to lead Israel to re-election after less than two months has been widely covered all over the world.  He has taken the headlines in a variety of newspapers and news channels, The Wall Street Journal and The Guardian.

The New York Times called Netanyahu’s defeat “an amazing loss,” explaining that he was generally considered a political wizard and was called by his supporters “the magician.”

New York Times: “Lieberman is positioning himself as an alternative?”

In an unusual step that illustrates the special attention devoted to the political turmoil in Israel, a number of international media outlets sent messages to users of their mobile applications, including updates on the dispersal of the Knesset.

The New York Times, a newspaper with which the prime minister has had several skirmishes over the past decade, reported that Netanyahu suffered an “amazing loss.”

“Only seven weeks ago he looked like someone who could not be beaten, and he was certain that he would win a fourth consecutive term and a fifth of the total.” The dream collapsed in a breathtaking display of political maneuvering in recent days when Netanyahu, who for years was dubbed “the magician” Tried to save his fate. ”

A lot of speculation has been raised regarding the motives that led Liberman to refuse to submit to the issue of the draft law, “wrote the New York Times.” Among other things, he is looking for political attention Seeks to avenge the political contempt he has suffered in the past or from himself as an alternative to Netanyahu.” 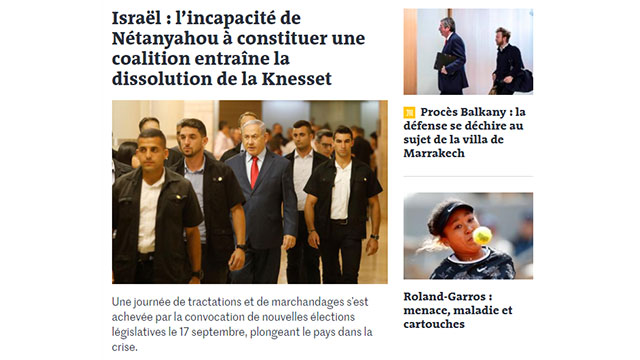 French Le Monde: “The paradox – the Arabs voted with Netanyahu”

The agency, whose reports are published literally in thousands of media outlets around the world, explained that going to elections complicates Netanyahu’s legal situation and that even if he wins the ballot in September, he is unlikely to be able to form a government and gain immunity before the indictment against him. 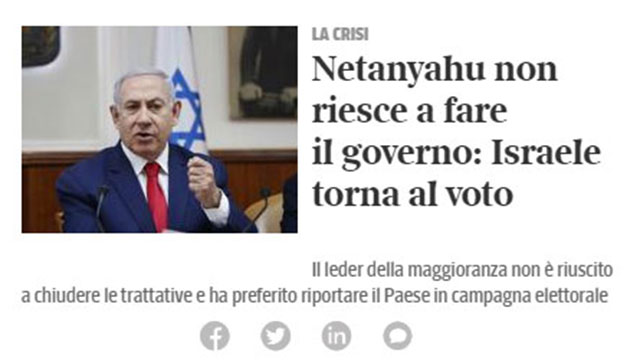 Corriere Della Sera: “Netanyahu preferred elections than another MK gets a chance”

The Italian “Corriere Della Sera” explained: “Netanyahu did not succeed in completing the negotiations, preferring to bring Israel back to the elections than to allow President Rivlin to place the government on another Knesset member.” Bibi the Magician, as his supporters call him, Haredim to Liberman. ”

The Associated Press reported that it was “a blow to Netanyahu, sending the old leader’s future to uncertainty.”

“Internal struggles between his allies and disagreements over bills designed to protect Netanyahu from prosecution have thwarted his efforts to form a coalition,” AP wrote.

“Instead of transferring the mission to one of its rivals, his party, the Likud, preferred to promote a bill to dissolve the parliament and send the country to the polls for the second time this year.” 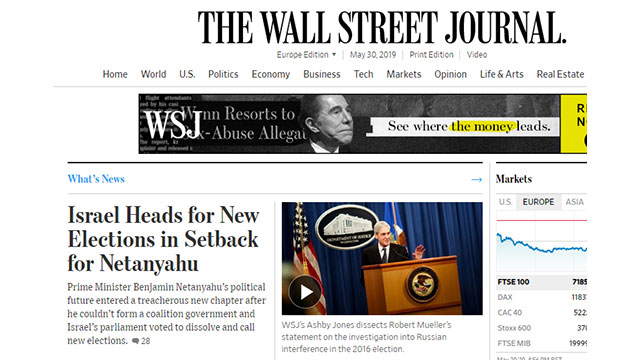 The Wall Street Journal: Israel is returning to the polls

The world media emphasize that in desperate attempts Netanyahu even turned to the Labor Party on the left. It said that he worked to disperse the Knesset in order to prevent a situation in which President Reuven Rivlin would impose the task of forming the government on another Knesset member such as Benny Gantz.

“The latest developments reveal Netanyahu’s political weakness, and his opponents seem to be well aware that he is vulnerable,” the BBC wrote. “It is possible that some of them even take positions against the background of their feeling that his decade in office may have entered its final stages.” 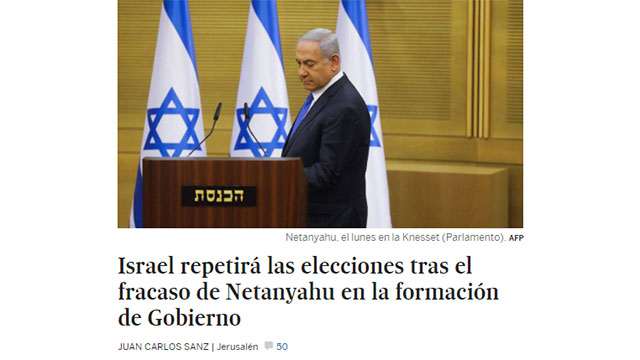 Spanish newspaper El Pais reported on “Israeli political soap opera” and wrote that “in the last few hours Israel has watched an unprecedented drama.” In La Repubblica, Italy’s most popular newspaper, they wrote: “For the first time in the history of the State of Israel, the Knesset dispenses itself barely a month after it was sworn in.” 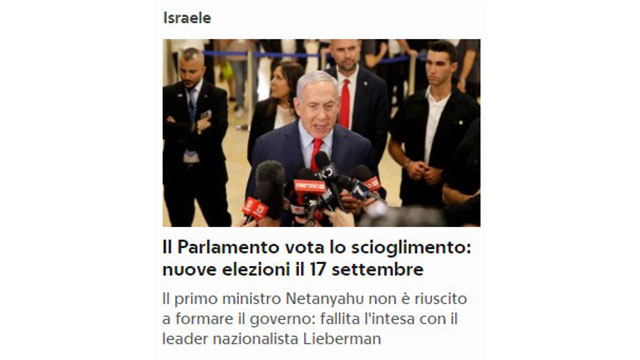 The Reuters news agency explains that the re-elections is “an unprecedented shake-up even in terms of a state accustomed to internal struggles,” and defined it as a big blow to Netanyahu.

“The fact that the 69-year-old leader, who only a few weeks ago was crowned by supporters of a political magician, did not succeed,” Reuters told Reuters, referring to the election as “an unprecedented shake-up even in terms of a country accustomed to internal struggles.” To form a government, could open cracks and challenge him within the Likud. ”

As in the BBC, the British Guardian, and the Wall Street Journal, the French newspaper Le Monde also devoted the headline to the headline. There they explained to the readers that the new elections were due both to the strange nature of the Israeli parliamentary system and to Netanyahu’s determination to hold on to power at any price. The fact that the Arab MKs, “whom the Likud has stigmatized and portrayed as enemies of the state during the election campaign,” voted in favor of dispersing the Knesset, presented it as paradoxical. 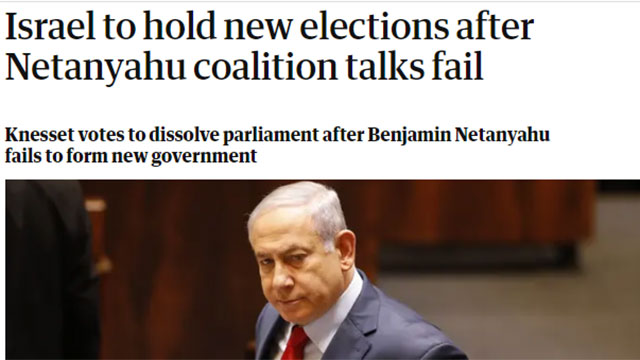