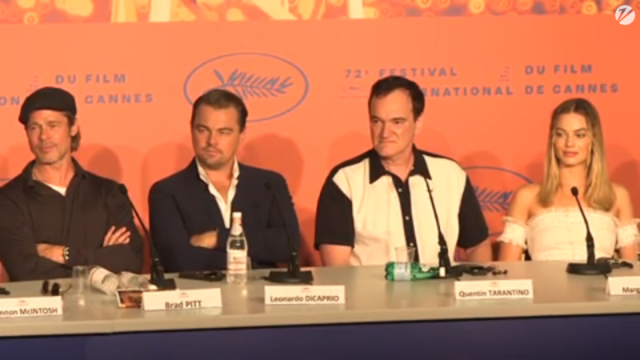 Quentin Tarantino (56) and his new wife, Israeli actress Daniela Pick (35), came together to the Cannes Film Festival in France for the premiere of the director’s new film, “Once Upon a Time in Hollywood” – 25 years after Tarantino’s mythological film “Pulp Fiction” premiered at the festival.

At the press conference, Tarantino opened by pointing out that the public still curious about Charles Manson and his cult. “I think we’re fascinated by it because, at the end of the day, it seems unfathomable. I’ve done a lot of research on it.” Tarantino said. “How he was he was able to get these girls and young boys to cement to him seems unfathomable. The more you learn about it, the more information you get, it doesn’t make it any clear. It makes it more obscure.”

“Once Upon a Time in Hollywood” takes place in Hollywood and focuses on the 1960s TV actor named Rick Dalton (Leonardo DiCaprio) and his stunt double Cliff Booth (Brad Pitt) as they make their way through a changing movie industry.

Once Upon a Time in..Hollywood @festivaldecannes Could not be more proud ❤

DiCaprio said that in this movie Tarantino wanted to celebrate the business that he grew up in. “I think this movie is a love story to Hollywood industry,” DiCaprio said. “We studied people from Ralph Meeker to Eddie Byrne, all these actors whose work really appreciates from an artistic perspective, who contributed in his [Tarantino] mind to cinematic and television achievements. That was most touching about the story. It’s a love letter to this industry we’re so fortunate to work in.”

“It was great ease, great fun,” Pitt said. “It’s that thing of knowing you got the best of the best on the opposite side of the table holding up the scene with you. We had similar experiences to laugh about. I hope we do it again.”

Tarantino, one of Hollywood’s most respected directors and until six months ago considered the eternal bachelor of Hollywood was asked about marriage and the new status.

“I just got married six months ago,” Tarantino said, as he nodded to his wife, the Israeli singer Daniella Pick, who was sitting in the front row and appears for a few moments in his new film . “I’ve never done that before. Now I know why. I was waiting for the perfect girl.”

“The marriage to Danielle made me look at life from a new angle,” said the director. “I can honestly say that I make decisions different from what I would have received three, four or even ten years ago.”

In this article:Finance, Quentin Tarantino