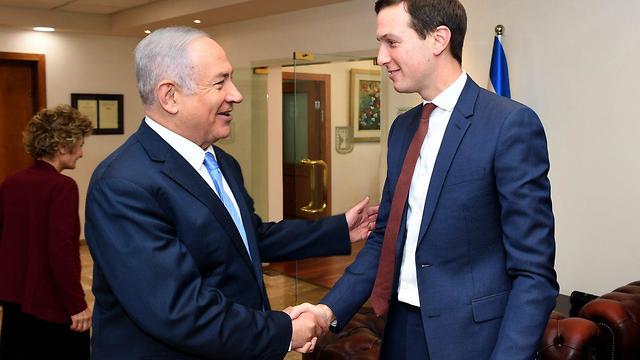 The Washington Post reported Saturday night that the US administration’s plan to promote the peace process between Israel and the Palestinians is not expected to call for the establishment of a sovereign Palestinian state. At the same time, the British Guardian published a letter from former European officials who denounced the plan and called on governments on the continent to reject it because it was “biased against the Palestinians.”

The newspaper quoted officials who spoke with the team of Jared Kouchner, senior adviser and son-in-law of President Donald Trump, who leads the program. According to the sources, the program will link peace and economic development with the recognition of Arab states in Israel and the acceptance of the existing status quo of the Palestinian Authority as “autonomy” – rather than as a sovereign state. The report actually strengthens a similar report earlier this year in the Arab media.

The Washington Post reported that the program would be published this spring or early summer. This follows the assessment of US officials last week, who told Reuters that it would be published only after Benjamin Netanyahu completed the establishment of the new government in Israel.
According to another report in the Guardian, former European officials condemned the plan and called on the European Union to reject it on the grounds that it is unilateral and biased against the Palestinians. The paper quoted a letter sent to the European Union and European governments signed by 25 former foreign ministers, six former prime ministers and two former NATO secretaries.

The letter calls on senior officials to oppose any plan that will not lead to the creation of a Palestinian state alongside Israel, and that Jerusalem is the capital of both. “The time has come for Europe to insist on the basic principles of the Israeli-Palestinian peace process,” the officials wrote. “Unfortunately, the current American administration has moved away from the long-standing US policy.” They criticized, among other things, Trump’s decision in 2017 to recognize “only one side’s claims about Jerusalem.”

Congratulations to the new Palestinian Authority Cabinet. With the experience of those on the list, we hope we will be able to work together toward peace and improving Palestinian lives. It’s time for a new chapter.

Meanwhile, the United States welcomed the swearing-in of the new Palestinian government, the day after its leader, Mohammed Ashtiyeh, presented the new cabinet alongside Palestinian Authority President Mahmoud Abbas.

“Congratulations to the new government of the Palestinian Authority,” tweeted Jason Greenblatt, Trump’s special envoy to the region. “With the experience of those who join it, we hope that we can work together to advance peace and improve the lives of the Palestinians.

Ashtiyeh’s appointment marks the end of the “technocratic government” that was formed with the consent of Hamas as part of the reconciliation process. The new government is no longer ostensibly painted in neutral colors, but is defined as a Fatah government without the participation of Hamas. The establishment of the new government, according to estimates, was done with the aim of isolating Hamas even more – which he declared did not recognize it.
In February, Kouchner referred to the “deal of the century,” while visiting the Middle East. “The solution to the issue of the border between Israelis and Palestinians will ensure free movement of people and goods and lead to new opportunities The Palestinian economy was limited in the absence of peace, and in previous plans the details were leaked and this caused the politicians to back down.we tried to formulate practical and just solutions to the Israeli- And Arab leaders, “Kushner said at the time.

Two weeks ago, the Lebanese newspaper Al-Akhbar reported that the plan would include understandings with Jordan about the citizenship of Palestinian refugees. Jordan, it was reported, the citizen was asked about a million Palestinian refugees in several stages, the largest of which will be the first of 300,000 refugees, including Palestinians from Gaza who are in Jordan.

Al-Akhbar also reported that Jordan would receive $ 45 billion in financial aid, some of which would be transferred in cash and some in projects. In return for the land in Tzofar and Naharayim that Israel leased, Jordan will receive territory from Saudi Arabia. According to the report, Egypt is also supposed to absorb Palestinians in return for financial aid.