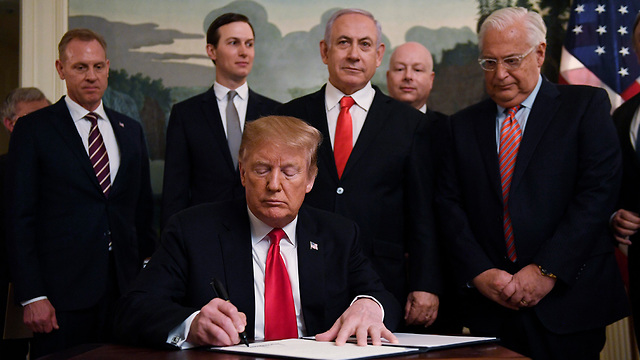 Prime Minister Benjamin Netanyahu met with US President Donald Trump at the White House Monday evening where the president signed a decree recognizing Israeli sovereignty over the Golan Heights.

The meeting between the two leaders comes against a backdrop of increased tensions in the region following a Hamas rocket attack on a town in central Israel early Monday morning.

Following the meeting, Netanyahu said: “My dear friend Donald, you have demonstrated consistent and extraordinary support for Israel, in our right to defend ourselves. You are never deterred, you are always present, including today and I thank you.”

The prime minister also addressed the recent developments vis-à-vis Hamas in Gaza and the IDF’s retaliatory strikes that began Monday evening. “Today, a rocket was fired from Gaza deep into Israel injuring seven people including two children. Fortunately, nobody was killed. Israel will not tolerate this… Israel is responding forcefully to terror.” 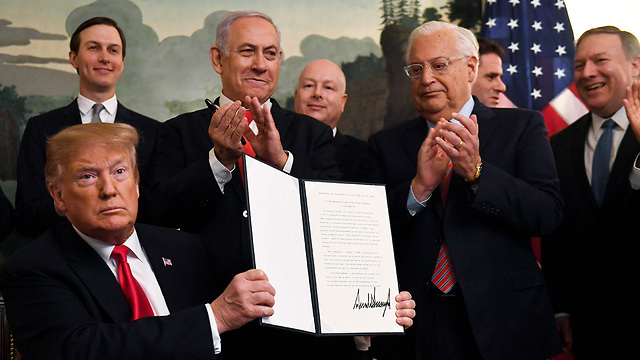 Netanyahu turned to Trump and said: “It was very generous of you to invite and meet me here at the White House. I am grateful to you. Throughout the years, Israel has had an excellent relationship with the United States but there has been no greater friend than you.

“You demonstrate it by the sanctions you have imposed on Iran, by the recognition of Jerusalem as the capital of Israel and moving the embassy,” said Netanyahu. “You said and you acted and you have shown (your support) today with your official declaration recognizing Israeli sovereignty over the Golan Heights. This is a historic day.”

Netanyahu continued to talk about the history and strategic importance of the Golan in protecting northern Israeli towns from Syrian attacks. “There have been declarations by previous non-Jews including King Cyrus of Persia, Lord Balfour, president Truman and President Donald J Trump. You have done it not once, but twice with your brave decelerations regarding Jerusalem and now the Golan,” he said.

Netanyahu also mentioned the Iranian threat and their attempts to establish themselves along Israel’s northern border.

President Trump told Netanyahu: “Welcome to the White House, you are a special person doing excellent work.” Regarding the rocket which injured several Israelis Monday morning Trump said that he is “praying for our friends in Israel.” The president reiterated his support for Israel’s right to defend itself while referring to the offensive actions by Iran, Syria and Hezbollah in Lebanon who seek to use the Golan to attack Israel. 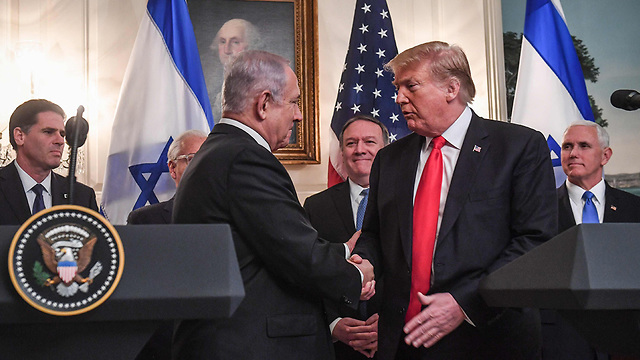 Trump spoke about the special bond between the two countries, declaring that Jerusalem is the capital of the Jewish people and that they wished to see the US embassy there for many years and now it is happening. He also pointed out the effect the sanctions are having on Iran and its aversion to America and Israel.

Meanwhile, Syria’s foreign ministry called the US decision to recognize Israeli sovereignty over the Golan Heights a “blatant attack on the sovereignty and territorial integrity” of Syria on Monday, in a statement carried by state news agency SANA.

United Nations Secretary-General Antonio is “clear that the status of Golan has not changed,” UN spokesman Stephane Dujarric said on Monday after the US President’s statement.

“The UN’s policy on Golan is reflected in the relevant resolutions of the Security Council and that policy has not changed,” Dujarric said. Israel captured the strategic land from Syria in the 1967 Middle East war.

On a lighter note, Netanyahu asked President Trump for permission to share Israeli wine with White House staff. The Israeli leader joked that he hopes “they don’t open an investigation” as a result. Back home, Netanyahu is facing a pending indictment on corruption charges.

Netanyahu made the offer after Trump signed a proclamation recognizing Israel’s sovereignty over the Golan Heights.

Netanyahu says he brought Trump a case “of the finest wine from the Golan.” But he says Trump, who doesn’t drink alcohol, is “not a great wine drinker,” and that he wanted to give the wine to Trump’s staff instead.