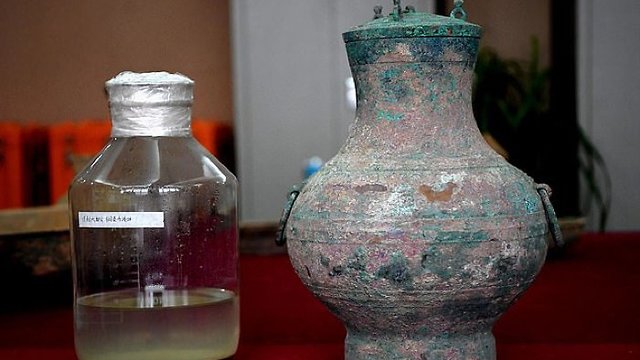 A bronze jug with a yellowish liquid was found in Ancient tomb in southeast China, which was believed to have been the legendary “Immortality Elixir” from 2,000 years ago.

The Chinese archaeologists estimate that a yellowish liquid found in a bronze pitcher in an ancient tomb is the legendary “Immortality Elixir”.  The tomb, which was discovered in Hanan Province in southeastern China, dates to the Western Han Dynasty (206 BCE-AD 9). Xinhua news agency reported.

The “Immortality Elixir”, which of course did not help the man buried there, was quite common in ancient Chinese culture. Other than the tomb and the potter, lamps, clay pots and a bronze mug containing the liquid were also found there.

At first, the researchers thought it was wine, but a closer look at the lab found that the 2.5 liters in the jar contained potassium nitrate and other substances.

The use of potassium nitrate and other materials corresponds to ancient Chinese writings, which say that they form the “potion of eternal life.”

Shai Jihan, director of the Institute for Cultural Preservation and Archeology, said it was the first time such a potion had been discovered in China. “The liquid is of great value to the study of ancient Chinese culture, the attainment of eternal life and the development of Chinese civilization.”