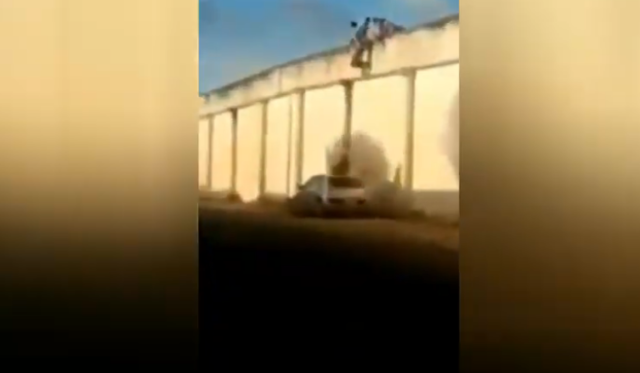 Where do I begin? I have had the opportunity to know well known or famous people. At the beginning of the Obama Administration, it was known that I had spoken to Obama in 2004. His appointee, Adolfo Carrión, Jr., who was Czar of Urban Affairs (as Republicans called him) had given me the rotunda of the Supreme Court Building of the Bronx for one of my educational events. Then I was with Congressman Charles Rangel at an event where he told the audience that “we” are going to fix Obama Care.

Actually, before the Election of 2008, I was in a room with thousands of people in Washington, D.C. where John McCain and Barack Obama spoke to the audience. People were impressed with the way Obama spoke on immigration reform, but he did not impress me much and it was not until 2011 that he really did something effective, by executive order (DACA).

We as citizens have to discern the truth and fact from fiction. And that leads me to Trump’s wall again. Let’s imagine that the wall is built and by thinking about that wall as our perfect protection to have national security a la Trump, we have to start asking important questions, questions that probably area not being asked.

I have enjoyed watching Chris Cuomo a few times and recently he did not impress me much, which makes me think of his brother Andrew Cuomo. Chris Cuomo said that before going on television to talk about border security that Trump had made a “compelling” case in front of the media. That is a red flag for me because Cuomo did not cite any supporting details which make him Trump-like. I have taken the time to write to both Chris Cuomo and Jim Acosta of CNN, but neither man has written back to me.

Getting back to the wall, it is critical to provide a quick reminder of just how we protect ourselves. A child calls 9-11 and tells an operator that her mommy is not waking up and the emergency team or police rush to help. Every minute counts in the fight to help. When the gunman was taking out people in Las Vegas, we know how long it took for the police to respond and get into action to save lives. Then there was the Parkland Massacre and 17 murders on our hands. Then the Tree of Life Synagogue in Pittsburgh. But these kinds of things or similar things go on all the time as civilians and police are killed.

So we know how long this has been going on, but we also try to speed up the help that is needed to make all of us safe. The drugs entering the “open border” end up in the hands of people who kill and people who are killed by the drugs. A big question has been raised that more people have to consider and that is that most of the drugs are coming through legal ports of entry. We also know that border agents are accepting bribes to let drugs in. Those agents are not MS-13 members, but Trump has failed to talk about them because it reflects on his “perfect” record to help our nation. And these things have been taking place for decades.

Now I agree that the wall has been a kind of deterrent, but that doesn’t mean that it always will be. Sure a comparison of the open border and the wall leads one to conclude that the wall is a great help at times. Jim Acosta just fell into the trap of Trump supporters as he said that things look peaceful by the barrier there and he sees no national emergency. He is right, but he fell into the trap because he probably has not considered what will be the state of things when there is no open border. Even Ron Paul sees no great need to have a wall as he projects his libertarian views. And some of his views are very disturbing to me. There appears to be something sadistic in his comments.

But let’s focus on the drugs that are coming into our country and will drug be able to climb this national wall that Trump keeps talking about. What do you think? Are you capable of thinking beyond Trump is the commander-in-chief and he knows what to do? And that people at the border have told me about that great need? Can’t they be wrong? How can drugs get over the wall? Take a look now at the history around the Berlin Wall and see that it was far from a perfect deterrent.

Where can the drugs be passed from one side of the wall to the other? How long will it take for each drug transfer? How will that transfer be achieved? And how successful will the drug carriers be? These are things we have to know before spending millions or billions. I just got this message from Senator Ted Cruz “As Democrats in Washington continue to play politics with our national security, I remain committed to funding a wall and securing our southern border.” He should be able to answer my question since he wants to fund der wall (there is power mit der mauer or wall in German).

The last caravan arrived 6,000 strong in Tijuana. Mexico and they were stopped at a legal port of entry. There is no need to focus on what is happening in their lives right now since the topic is about drugs going over the wall. With all the open border that we hear about, isn’t it amazing that 6,000 people chose to enter through the legal port of entry? Are they stupid? There were choices, wall, open border, and legal port of entry.

Here’s a prison break over a wall that I found on the internet. It happened in Brazil. But Trump’s wall is stronger? Keep believing it!

And in Mexico there is a new motion picture being filmed right now as Donald Trump’s Wall is completed. It’s called Carlito’s Wall. There is speculation that Carlito is from El Salvador, a former member of the MS-13. Many others say that he is from Honduras, from a wealthy family. And there are a few discerning people that call him a Ruthless Russian with ties to the Kremlin.

Carlito says “Trump built the wall, but I control the wall. I decide who gets in…I decide where he gets in…I decide when he gets in….and I decide how he gets in.” I am not for asylum, but everything is on the market and everything has a price.” Look and learn as Carlito shows that he has Washington, D.C. in his pocket. And that means the reps, the cabinet, and the Supreme Court too. And all that Senator Ted Cruz writes about is securing funds for the wall through the confiscation of property under what may be the “El Chapo Act.”

Just in the last week there have been a growing number of incidents at or near schools. Trump and the press have not woken up to the best things to do to protect us. A six-year old brought a gun and ammunition to school (he was not part of a gang thank goodness), a security officer left his gun in a bathroom and went back to find it (thank goodness), and a youth was planning to kill people in two schools. I have repeatedly written that we need “Alyssa’s Law” to be passed to speed up the response time in our nation’s schools when the shooting starts.

We don’t need El Chapo or El Trumpo. There has been no invasion. Let’s declare Trump a national emergency. Trump should be able to tell us the response time by providing written proof and dated so we know that is not made up by Trump. The press should ask him how long will it take for our nation’s security to respond to help us if the wall is built. And what about our nation’s schools? Don’t those people count?