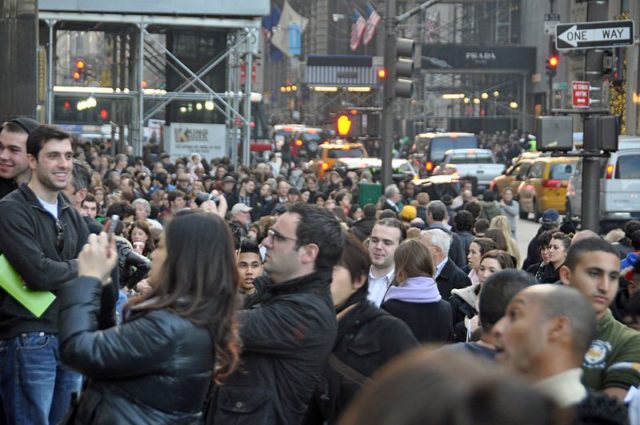 Black Friday is a good time to recall certain “classical” observations about economics and society. We ought to recall Adam Smith, both his Theory of Moral Sentiments (1759) and his much better-known Inquiry into the Nature and Causes of the Wealth of Nations (1776). Back in the 18th century, Smith had already analyzed the complex nuances of international trade. Among other things, he concluded that a nation’s trade policy outcomes often were wholly unexpected and broadly harmful.

True to its reputation, Wealth of Nations was a revolutionary book. Still, it did not intentionally favor the monetary or social interests of any one particular economic or social class over another. Not at all.

Instead, acknowledging the essential “oneness” of all human affairs (a singularity hailed by as varied a group as Marcus Aurelius, Lucretius and the Jewish Scriptures, not to mention Hinduism and Buddhism) Adam Smith sought to understand the best possible market for exchanging goods and services. This, he said, would be a market with universally valid advantages that would simultaneously advance the wealth of all classes.

What he plainly did not seek was an economic system that could all too easily become injurious across the board.

He took special pains to highlight errors of protectionist strategies, most notably any unilateral imposition of tariffs that could be reciprocated.

Smith reasoned the perpetual collisions of individual self-interest and those of nations would – in the language of today’s professional economists – prove “optimal.”

It’s especially propitious on the eve of yet another Black Friday to ask: What has this 18th-century stance on money and markets to do with our present American system?

Never a plutocrat, Smith nonetheless argued persuasively that certain arrangements of private wealth enhancement could at least permit the poor to live tolerably. Rejecting his contemporary Jean Jacques Rousseau’s fully contrary position (that “the privileged few… gorge themselves with superfluities, while the starving multitude are in want of the bare necessities of life”), Smith foresaw in capitalism not just a rising productivity, but also the necessary foundations for an enduring political liberty.

Whether or not he was correct depends much upon who is doing the assessment.

Karl Marx, of course, offered a plainly alternate view to Smith’s general optimism about capitalism. Marx had seen in capitalism a hideously corrosive source of personal defilement and communal self-destruction.

By applying various capitalistic modes of production and exchange, Smith asserted, an inextinguishable social inequality might still be favorably reconciled with measurable increments of human progress. In the vernacular: A rising tide lifts all boats.

Today, among U.S. President Donald Trump’s most senior economic advisors, there is no Adam Smith. Indeed, however much these advisors may seek to wrap themselves in the presumed messages of Wealth, they wittingly ignore the depth and complexity of Smith’s thought. Most conspicuously, they disregard the fact Smith’s preferred system of “perfect liberty” could never be consistent with Black Friday-type encouragements – that is, of a crude and almost fevered consumption.

This particular and vulgar species of consumption, driven by cravings related to feelings of individual self-worth, could never expect to become a rational engine for economic or social improvement. This crucial point should resonate loudly and instructively with all who would still heap gratuitous praise upon a White House that bombastically equates personal success with the elicited envy of others.

Back when the United States was born, Smith already understood what present-day Trump trade policies disregard: Certain inexorable laws of the marketplace, driven by a natural competition, demand a principled disdain for vanity-driven consumption. Always.

Under absolutely no imaginable circumstances could Adam Smith have ever championed a system of consumption premised on the notion that material acquisition ought to stem from a prior wish to impress other people.

Although the justly-famous thinker had already understood the psychological and economic dynamics of “conspicuous consumption,” he also feared and loathed these dynamics. From his personal point of view, it was entirely reasonable that the market should routinely regulate the price and quantity of available goods according to certain unchanging and “natural” arbiters of public demand. This market, he urged accordingly, must never be manipulated from above, by governments, especially by way of deceptively foolish policies that might all too readily impose indeterminate tariffs and corollary trade wars.

Now, at the threshold of another adrenalized Black Friday, America is losing sight of Adam Smith’s “natural liberty.” In vain, this nation attempts to construct a viable economic posture upon oceans of shallow slogans and rivers of empty witticisms.

Our national problem of orchestrated trade barriers and manipulated hyper-consumption is not primarily economic. Rather, as Smith would himself have warned, because it is spurred on by seemingly ineradicable personal doubts of self-worth and self-esteem, this problem more appropriately should be examined at a psychological level.

Democrats and Republicans alike claim our national economic effort must somehow be oriented toward status-based purchasing, disregarding Adam Smith altogether. Oddly, almost no one asks: What sort of society can we expect from an economic system based on social imitation and crass conformance?

Writing in the middle of the nineteenth century, the American Transcendentalist philosopher, Ralph Waldo Emerson, remarked presciently on “self-reliance.” Any foolish “reliance upon property,” Emerson warned, is the predictable result of a “want of self-reliance.” What suitable corrective was needed? Emerson answered succinctly: “High thinking and plain living.”

In his Theory of Moral Sentiments, Adam Smith noted that human beings are not made any happier by their possessions, but that the rich, in seeking the “gratification of their own vain and insatiable desires,” may still advance the “interest of society.”

With remarkable originality, Smith explained that the wealthiest members of the nation, without ever consciously intending it, “are led by an invisible hand” to bring forth necessary reductions in social inequality.

Adam Smith likely would have shuddered at today’s Black Friday call to “shop till you drop,” because he recognized the consequences of a market theory founded upon delusion. As long as our American economy remains animated, at its core, by rabid conspicuous consumption and generally destructive trade wars, an accelerating process of class warfare will be our inevitable narrative.

Ironically, the results will weigh heavily upon rich and poor together.

This article was first published in The HILL