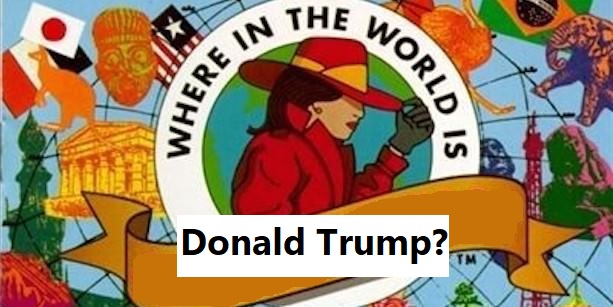 Remember Where in the World Is Carmen Sandiego? Times seemed much better then. Right now democracy is at stake and our nation is divided. Are we our own enemy?

The exit polls from the midterm elections reveal this from CNN about immigration, “most voters didn’t rank it as the top issue facing the country. About a quarter of voters said immigration was the most important issue, according to exit polls. Of those voters, 75% were Republicans. About half of voters (46%) said Trump’s immigration policies are too tough. A third said they’re just right, and another 17% said they’re not tough enough.”

But I know that all people are entitled to asylum if it so warrants. Be it that caravan or Jewish people seeking a new home in Palestine after World War II or even before, we cannot turn our backs on good people. My late grandmother came to New York in 1911 and she was never naturalized. We had no worry about her being deported, but Trump has changed things for immigrants, but not as much as you will soon see.

Where in the World is Donald Trump?

New York. Is he in Trump Tower under house arrest?

Florida. Is he in Mar-A-Lago in the swamp surrounded by alligators?

France. Is he in a hotel trying to figure his way out of things?

Golf course (Trump owned of course). Is he in a trap alongside one of the greens?

On the phone on Air Force One. Is he regretting firing Jeff Sessions and appointing Matthew Whitaker who is on the advisory board of a company being investigated by the F.B.I.?

Atlantic Ocean. Is he looking down thinking of taking a long dip in the Atlantic?

Washington, D.C. Is he thinking of issuing a presidential order making Hillary Clinton president of the United States?

He has just confused the Baltic and the Balkans. He knows little about the United States Constitution and its history. He deceives people all the time, but at this moment he is not deceiving himself. He knows where things are going.

The tariffs are affecting beer sales in Canada and that could mean losing jobs. Salaries have not gone up and Trump’s lie includes wages that have risen because of shortages of labor, rising minimum wages that preceded Trump, and much more. The stock market is high, but that affects a small percentage of people compared to the huge percentage of people who do not have money to invest. Trump forgot lots of people from 2017 to 2018.

Here is date about the border that people should digest. Border Data that shows things were much more aggressive under George W. Bush and Barack Obama until 2015. We cannot trust Trump’s word and mind.

Americans must finally realize that the key issue is our democracy and the attack on the press because of all those lies, mistakes, and deliberate misinterpretations with no apology. The American people deserve an apology, but it will soon get justice for everything has been going on. I call for all of us to unite right now in Multi-Marches across the United States, but including Washington, D.C. There is a long list of grievances that we hold against Donald Trump and we probably need “committees of correspondence” to redress those grievances as we had with King George III.

It is time for America to come to its senses. Too much is at stake and I haven’t even mentioned Russia. If you wish to know more about MS-13 please see my article Lucky Trump Equals Lucky Lindbergh and Lucky Luciano in Jewish Business News as it details how the Department of Justice was collaborating effectively with police to produce better results before the resignation of Jeff Sessions and his turning the effort upside down, something not at all expected from Trump and Sessions.

It was just announced that Elvis Presley. George Herman “Babe” Ruth, Alan Page, Orin Hatch, Roger Staubach, and the Adelsons (Sheldon and Miriam) will be awarded the Presidential Medal of Freedom by Trump.

I would strongly recommend a new Presidential Medal for Sexual Freedom to be awarded to Bill Clinton and Donald Trump. They should be honored, especially since the evangelicals around Trump hardly protested. I can see Melania Trump pinning the medal on Bill Clinton and kissing his cheek in the name of the United States. We should thank Sheldon Adelson for getting us into all this trouble as he was a major contributor for Trump from the start. Thanks for having so much faith in him!

See the pretty recent Trump video talking about my community and MS-13. That gang has been the center of attention for attacks since 2002 or before and that was under George W. Bush, not under Nancy Pelosi. Nobody listens to me! I’ve known about the rapes since 2004 when anti-immigrants were in power here in Suffolk County and I was blacklisted by Steve Levy’s appointees. That was long before Obama even. Show this to people in your community and let’s march together for truth, justice, and the American Way.