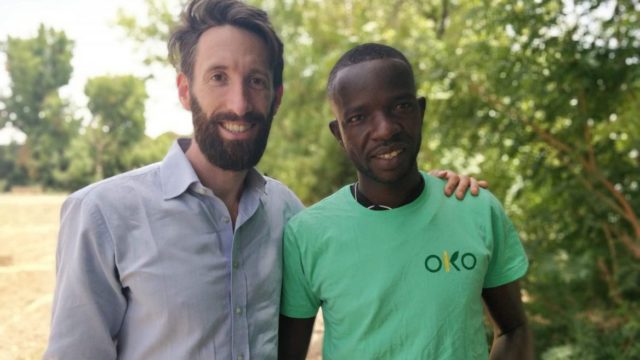 Simon Schwall worked with 150 field agents in Papua New Guinea and, within 18 months, BIMA’s product became the most popular life and health insurance in the region, with some 350,000 active policies sold.

As satisfied as Schwall was with his success, “I realized that one of the main risks, one that people felt even more strongly about, was crop insurance,” Schwall tells ISRAEL21c. “Farmers need protection against a bad season.”

Schwall approached his employers with the idea, but BIMA wanted to stay focused on its main insurance products. So Schwall left to create his own business.

His new company, Tel Aviv-based OKO (OKO is a god of agriculture and good harvest in West Africa) began a pilot educating farmers in Mali on the value of crop insurance. With just nine local agents, OKO signed up 755 farmers in four weeks last summer.

The cost for insurance against crop failure due to drought, flood, pest or disease, runs about $30 per hectare per year. The average farm size is 1.5 hectares.

OKO’s pilot targeted rice farmers who earn around $900 per five-month season. “So the insurance comes to around 3 percent of their farming revenue,” Schwall explains. 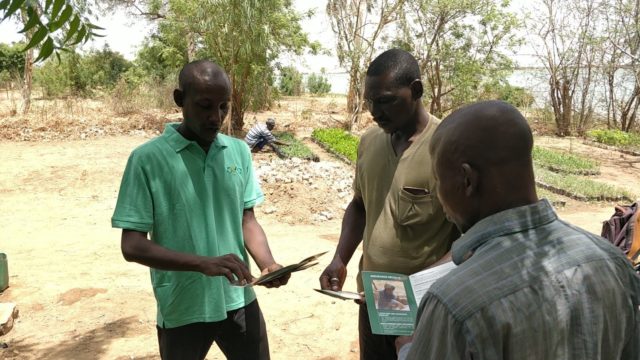 The simple OKO interface is based on text messages. Via a chatbot, OKO can determine the size of a field, crop type and location in order to provide an insurance quote. Payment is taken from the farmer’s mobile account. If a claim needs to be made, the farmer texts the word “claim” to OKO.

OKO hasn’t had to pay out any claims yet, but this process is where some of the company’s proprietary technology would come into play.

Crop insurance used to be only for large and wealthy farmers, Schwall explains, in part because agents would have to survey a farm in person to confirm claim-related damage.

In the last decade, a new type of coverage called “index insurance” has emerged that utilizes hands-off satellite data. Index insurance can review whether the rainy season in a particular area was insufficient and if a claim is valid, for example.

Index insurance opened up the possibility for covering small farms in remote areas, but it’s not as accurate as an agent paying a visit.

“A very localized weather event might affect only a few farmers, so the insurance company won’t pay,” says Schwall. “But there’s also the risk that the insurance might pay some farmers in a particular area that hasn’t been affected at all.”

OKO has developed its own algorithms designed to work around this uncertainty by predicting production yields based on satellite and historical data. That will allow OKO to be more precise while still keeping costs to its customers to a minimum.

For the four-week trial, however, OKO sent live agents to the farms. “At the beginning it was important to have real people with uniforms in the field,” Schwall said. “It’s very reassuring.”

Long-term, and in order to scale the company, OKO plans to partner with mobile operators to have its agents working in those company’s call centers – an arrangement that worked well for Schwall at BIMA.

Insurance is not just about helping a farmer survive a bad season. It also stabilizes income so that the farmer can secure a bank loan to, say, buy more seeds or fertilizer without the risk of losing the entire farm to the bank. 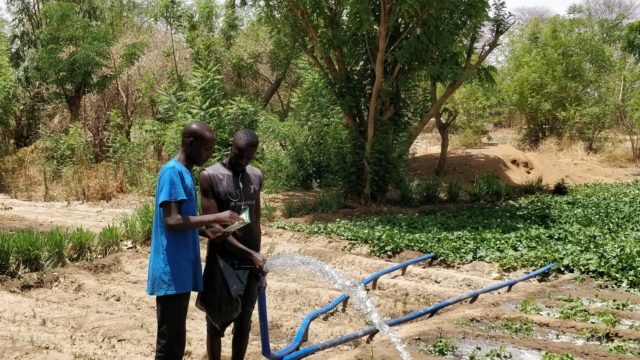 Developing nations handle crop insurance in different ways. In India, for example, insurance is mandatory and subsidized by the government at half the price of Mali (although in practice, “most small farmers are not covered,” Schwall says). In the Philippines, the government sets aside an emergency fund in case of a typhoon.

“We want to move from these kinds of emergency funds where it’s all or nothing to a case-by-case system based on the individual farm,” Schwall says.

OKO is a broker, not an insurance agent, so the company is not taking on financial risk for the farms it covers. Nor is OKO is wedded exclusively to mobile operators. In China, for example, micro-insurance and loans are mostly handled by the country’s popular AliPay app.

Schwall is an inadvertent Israeli – he was not planning to move to the country but wound up doing so after he met an Israeli woman while working in Africa. (They’re married today.)

OKO has seven workers – two in Israel, two in Paris, two in Mali and cofounder-CTO Shezhad Lockhandwalla in India. The company has raised $145,000 and is now seeking another $750,000 for a seed round.

OKO may be small but the buzz around it is growing. The company was selected to represent Israel at the UN World Summit Awards in the “inclusivity” category and won a prize from Orange in France for its work in Mali. And the company is a recent graduate of the Barclays accelerator in Israel for fintech startups. Barclays is one of OKO’s shareholders.

The market for crop insurance seems nearly unlimited. Two billion people around the world are dependent on the weather for their income, Schwall points out, making a living off unirrigated farming, and only 3 percent have insurance, mostly in India.

If you multiplied even the lowest fees OKO charges – $15 per hectare in India – by all the farmers who could benefit from crop insurance, you can see why OKO has the potential to be the next Israeli green-tech darling.