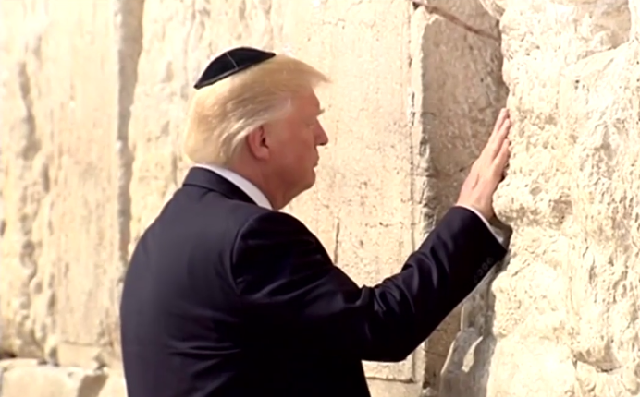 Israel fears the American peace plan will include a declaration of Jerusalem as the capital of both states – Israel and the Palestinians – in an effort to persuade Abbas to return to the negotiating table.
Palestinian Authority Chairman Mahmoud Abbas  (Abu Mazen) has boycotted the Americans since President Donald Trump’s recognition of Jerusalem as the capital of Israel.
According to diplomatic sources, the Americans are trying different ways to get Abu Mazen to soften and return to the negotiating table and to enlist the support of the Arab world for the plan.
The fear in Israel is that one of the temptations that the White House will present to Abu Mazen will be the mention of Jerusalem as the future capital of the Palestinian state. “Trump wants a deal and he’s very serious,” says a senior Israeli official. “For the Americans, the Israeli-Palestinian conflict is relatively easy to solve and is ripe fruit.”
The source estimated that if the Republicans weaken in the midterm elections in the United States, Trump may increase efforts to try to resolve the Israeli-Palestinian conflict in order to reach presidential elections with a major foreign policy achievement.
The inclusion of Jerusalem in the American peace plan is likely to complicate Prime Minister Benjamin Netanyahu, certainly if he is facing elections. Netanyahu may make it clear to the Americans that such a clause would provoke strong opposition on the right and complicate it from a coalition perspective. In such a case, it is reasonable to assume that Netanyahu will at least ask to postpone publication of the plan until after the elections in Israel. Meanwhile, the Americans are preparing to announce the plan before the end of the year, or early next year.
Senior Israeli officials say that in formulating the peace plan, the administration operates according to three principles that we have not yet known: Anyone who comes to the negotiating table must give up something and there are no unilateral concessions, and anyone who leaves the negotiating table pays a price. Anyone who says no to the outline that is submitted will risk that the next outline will be less good for him. In fact, it’s a business approach that says “Take the deal I’m offering now, because the next one will be worse.”
Meanwhile, businessman Ron Lauder, a friend of President Trump, has tried to appease between Abu Mazen and US President. Lauder met on Monday with Palestinian negotiator Saeb Erekat and Palestinian intelligence chief Majed Faraj.
The White House denied that Lauder had been sent by Trump, but Lauder used the meetings to try to convince Abu Mazen that he should talk to the American administration again that the “Deal of the Century” is going to be much better than he thinks.
By Ynet News
In this article:Ron Lauder, Finance, Israel-Palestine conflict, Jerusalem capital of Israel