B’Tselem Executive Director Hagai El-Ad sent a message to Prime Minister Benjamin Netanyahu from the UN Security Council, telling him “I am not a traitor” and insisting “you will not silence us.”

The head of the left-wing human rights NGO was speaking at a Security Council meeting on the situation in the Middle East, where he described the suffering of the Palestinian people.

“It is very difficult, if not impossible, to fully convey the indignity, the outrage and the pain of a people denied the benefit of human rights for more than 50 years,” he began. “It is hard to articulate the flesh and blood meaning of the exposed lives Palestinians endure under occupation.”

“But no matter how hard it is to describe, the real hardship is that of facing such an intolerable existence day in and day out, trying to live, raise a family and develop a community under these conditions,” El-Ad went on to say.

Describing this routine, he went on: “Since I last spoke here, 317 Palestinians have been killed by Israeli security forces and 13 Israelis have been killed by Palestinians. Israel has demolished 294 Palestinian homes and has continued making arrests on a daily basis, including of minors. Israeli settlers have vandalized and uprooted thousands of olive trees and grapevines. Israeli security forces have continued to regularly enter Palestinian houses, sometimes coming in the dead of night, to wake children, register their names, and take their pictures. Palestinians have lost countless of hours waiting at checkpoints with no explanation. And so, the routine of the occupation marches on.” 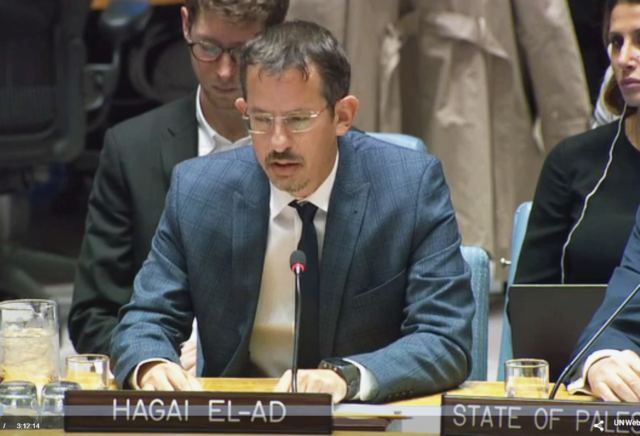 This, he said, “is a calculated and deliberate process of slowly splitting up an entire people, fragmenting their land and disrupting their lives; separating Gaza from the West Bank, breaking up the West Bank into small enclaves, and walling off east Jerusalem from the rest of the West Bank. Eventually, what remains are isolated bits easier to oppress.”

“The Gaza Strip, with a population of nearly 2 million, has essentially become an open-air prison,” El-Ad accused. “Its inmates have been staging protests for the past six months after suffering for nearly a decade under an Israeli-imposed blockade that has led to economic collapse, soaring unemployment rates, polluted drinking water, dwindling power supplies, and ultimately to deep despair.”

“Since March 30, more than 5,000 Palestinians have been injured by live Israeli gunfire, and more than 170 killed, including at least 31 minors. The youngest were just little boys, just 11 years old when they were killed,” he went on to say.

El-Ad claimed Israel’s actions against the Palestinians have nothing to do with security. “They do however affect the amorphous construct called the Middle East peace process. If one looks beyond the blinders of this process, it is clear to see how its supposedly yet-to-be-negotiated outcome is in reality being dictated day in and day out by unilateral Israeli actions,” he said.

Israel, he asserted, is following a different moral compass, “and while at it, is also busy removing any obstacles that might keep it from its objective. Ongoing efforts to legislate against Israeli human rights organizations now go hand in hand with the routine in which opposition to the occupation is being equated with treason.”

Prime Minister Netanyahu responded to El-Ad on Twitter, writing: “While our soldiers are preparing to defend Israel’s security, the B’Tselem executive director has chosen to make a speech ridden with lies at the UN in an attempt to aid the enemies of Israel. The conduct of B’Tselem is a disgrace that will be remembered as a short and passing episode in the annals of our people.”

“Mr. El-Ad, you’re a citizen of the State of Israel who serves our enemies,” Danon told the B’Tselem head in Hebrew. “They’re using you against us. IDF soldiers protect you and you come here and defame them. Shame on you, collaborator.”

Outgoing US Ambassador to the UN Nikki Haley joined Danon’s criticism, calling El-Ad’s speech “a distorted and one-sided accounting that is provided all too often in the United Nations when it comes to Israel and the Palestinian issue.”

“It is why I’ve so often attempted to bring some diversity to our discussions of the challenges facing the Middle East,” Haley noted.

Speaking of Iran’s use of child soldiers, Haley finished her comments with a warning to anyone who does business with companies and individuals under US sanctions “could themselves be subject to US sanctions.”

“The sanctions the United States is leveling against Iran are broad and deep and for good reason. Any company or individual that does business with this Iranian network, is complicit in sending children to die on the battlefields of Syria and elsewhere. The United States will do all we can to reverse the flow of international funds into the Iranian regime,” she concluded.