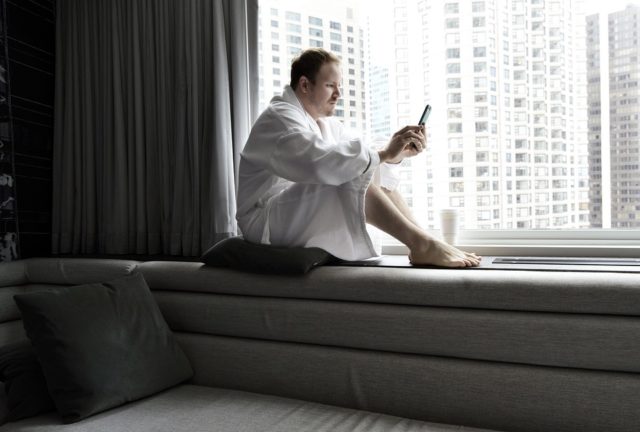 “It is getting late; shall we ever be asked for? Are we simply not wanted at all?” – W.H. Auden, The Age of Anxiety

We can all witness the deep pleasures bestowed by any “personal device.” Indeed, for literally uncountable souls, there is seemingly little that can compare to the joys of a message. Reciprocally, nothing can produce greater private darkness than the despairingly “loud” reverberations of cellular silence.

Personal devices, most of them interlinked, promise far more than efficient routings to enhanced personal safety or an accessible method to “stay in touch.” Conversing or messaging can grant people a satisfyingly easy and convenient therapy. Above all, they can permit both sender and recipient to feel needed, valued, less anonymous, less alone.

Ultimately, a pleasingly diminished sense of aloneness is what the social networks are all about.

The cell phone and related social networks have not actually caused any users to suffer any “fear and trembling;” rather, these devices remain just tell-tale instruments of assessment, diagnostic tools that can help one identify and conquer any deeply primal angst. Without this prosaic but satisfying tool, such core apprehensions might otherwise lie undetected and dormant.

The destabilizing inner fear of loneliness so keenly expressed by social networking gives rise to another problem. To begin to understand this significance, one must first understand that nothing important, in science or industry or art or music or literature or medicine or philosophy, can ever take place without at least some already endured measure of personal loneliness. To exist apart from the mass – that is, to be extracted from what Freud had called the “primal horde,” or what Nietzsche termed the “herd,” or Kierkegaard the “crowd” – is indispensable to any exceptional intellectual development.

Today, the noisy and uneasy mass has infested our solitude. Upon most of us, the telltale traces of “herd life” may already have become indelible.

Human life is always death’s prisoner. Until we can face this remorseless truth, we can never truly experience our lives with sincerely intense pleasure.

Despite our manifold efforts to stay connected with cellular telephone calls, tweets and texts, our bewildering doubts have become cheerlessly inexhaustible. In essence, this is because we continue to look “outside,” to others, for personal validations.

The attraction of cell phones and related social networking derives largely from our breathless and machine-like existence. Now, “We the people” celebrate almost any available expressions of a push-button metaphysics. Now, absolutely every hint of personal passion must expectedly follow a narrowly uniform path.

Wherever we might turn, we witness an implicit reciprocity between creator and creation, an elaborate pantomime between users and used. Predictably, our multiple and intersecting techno-constructions are making a machine out of both Man and Woman.

In what amounts to an unforgivable inversion of Genesis, we humans now generally behave as if we had purposely been created in imago machina.

Preoccupation with personal devices and social networking is merely the most visible symptom of a much deeper pathology. The “disease” we now suffer is an incapacity to be at any real peace with ourselves.

In the United States, where this sort of corrosive primal illness can choke off the future as well as the present, Transcendentalist Ralph Waldo Emerson’s earlier call for “high thinking” has gone unheeded.

Today, as the United States shamelessly expresses an orientation too casually described as “America First,” the country has willingly become the reductio ad absurdum of what the seventeenth century English philosopher Thomas Hobbes had earlier called “a war of all against all.”

In such a war, there can never be any victories. Never.