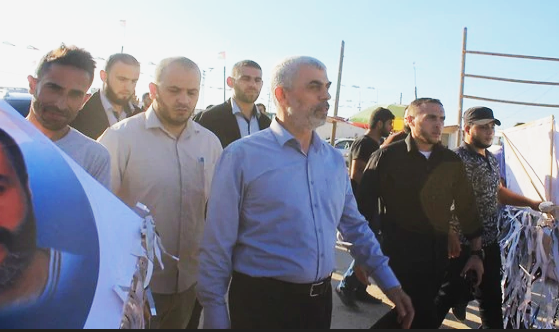 Yahya Sinwar, Hamas’ leader in the Gaza Strip, who spent 22 years in the Israeli prison and released seven years ago, called  for a ceasefire with Israel, in the first-ever interview with an Israeli paper.

The rare interview to Yedioth Ahronoth and the Italian La Repubblica, Sinwar says: ‘There’s a true opportunity for change. War is not in our interest, but in the current situation, an explosion is inevitable.’

The full interview will be published in Yedioth Ahronoth‘s weekend supplement on Friday.

Speaking with Italian reporter Francesca Borri in Gaza, Yahya Sinwar said that he agreed to the interview because “he now sees a real chance for change.”
“For many Israelis, Yahya Sinwar is an enemy. That is why this interview will not be easy to read,” she says, “But one thing I can promise: I tried to do the most professional journalistic work, ask the hard questions, and not let Sinwar off easy.”

Why did you decide to give this interview now, to an Israeli newspaper no less?

“Because now I see a true opportunity for change.”

It appears the most realistic thing right now in Gaza is another war.

“A new war is in no one’s interest, certainly not our interest. Who really wants to confront a nuclear superpower with four slingshots? War doesn’t achieve anything.”

But you have been fighting all of your life.

“I’m not saying I won’t fight anymore. I’m saying I don’t want any more wars. What I want is an end to the siege. My first commitment is to act in the interest of my people; to protect them and to defend their right for freedom and independence.”

Eighty percent of Gaza’s population lives off humanitarian aid and 50 percent go hungry. Don’t you think you have a responsibility in this situation?

“The responsibility lies with those who closed the borders, not those who tried to reopen them. My responsibility is to cooperate with anyone who could help us put an end to the siege. In the current situation, an explosion is inevitable.”

The interview took place at the midst of negotiations over a ceasefire—or a calm—between Israel and Hamas. I asked Sinwar what did he mean when talking about a ceasefire, and he gave me a laconic response: “Complete quiet, and an end to the siege.”

“No, quiet for quiet and for the end of the siege; the siege is not quiet.”

How important are prisoner exchanges in a ceasefire agreement?

“It’s more than important, it’s absolutely vital. This isn’t a political question, it’s a moral question. I see it as a duty. I’ll do whatever it takes to release anyone who is still in prison.”

What happens if this ceasefire doesn’t work? After all, so far any attempt to reach an agreement has been torpedoed by the extremists on both sides.

“The agreement doesn’t exist yet. Hamas and almost all of the other Palestinian organizations are willing to sign it and honor it. But at the moment there’s only the occupation. It’s important to make it clear: If we’re attacked, we’ll defend ourselves. As always. And we will have another war. But then, in a year, you’ll be here again; and I’ll again tell you that with war you achieve nothing.”

The full interview with Yahya Sinwar will be published in Yedioth Ahronoth’s weekend supplement on Friday.