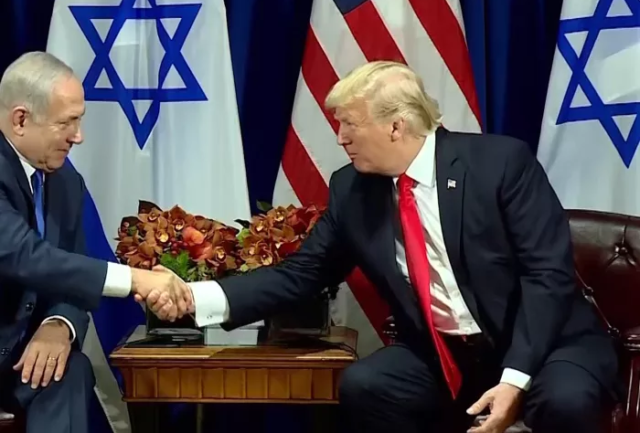 US President Donald Trump said on Tuesday night that Israel will “have to pay a higher price” in negotiations with the Palestinians in return for his recognition of Jerusalem as Israel’s capital and move the American embassy from Tel Aviv.

Addressing at a campaign rally in Charleston, West Virginia, Trump said Palestinians “will get something very good” in any future peace negotiations. “because it’s their turn next.”

Trump received rapturous applause from his supporters as he reminded the crowd of his decision to recognize Jerusalem as the capital in December 2017 and to move the US Embassy to the city in May.

While claiming that he had “taken Jerusalem off the table” despite being “inundated with calls” from foreign leaders urging him not to make his expected declaration, Trump made clear that the Israelis would be expected to make heavy compromises in future negotiations.

“And if there’s ever going to be peace—remember I said it—with the Palestinians it was a good thing to have done because we took it off the table because every time there were peace talks, they never got past Jerusalem becoming their capital, so I said let’s take it off the table,” Trump said, explaining his strategy.

“And you know what, in the negotiation, Israel will have to pay a higher price because they won a very big thing, but I took it off the table,” he continued.

Repeating several times that he had removed Jerusalem from becoming an obstacle to successful negotiations, Trump stated that the Palestinians would soon reap the benefits of the move.

“But they’ll get something very good because it’s their turn next. Let’s see what happens.”

After Trump recognized Jerusalem, Palestinian leaders have refused to meet with Trump’s representatives because they “having relinquished their capacity to act as an honest mediator in negotiations.”

Trump has made the same statement in Davos earlier this year when speaking alongside Israeli Prime Minister Benjamin Netanyahu. He said, “You won one point, and you’ll give up some other points later on in the negotiation — if it ever takes place.”

The president also criticized his predecessors for failing to deliver campaign promises to recognize Jerusalem as Israel’s capital and to move the embassy to Jerusalem.

Trump further described the pressure that world leaders attempt to apply ahead of his declaration.

“So actually what I did, I was about five days off I stopped taking calls I said I’ll call you back next week. Because I knew what they were going to ask me.”

In this article:Finance, Israel-Palestine conflict, Jerusalem capital of Israel