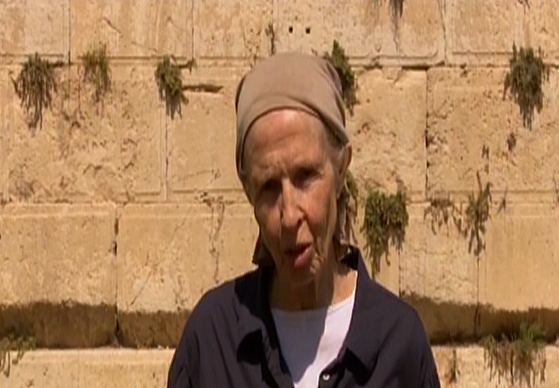 A massiv ancient stone detached from the Western Wall early Monday, just hours after the Tisha B’Av fast ended, tumbling down onto the egalitarian prayer area, near Robinson’s Arch, south of the main prayer plaza.

The area was established for Conservative and Reform Jews who wish to pray without the segregation of men and women.

The stone falls only a few meters away from 79-years women praying as she does regularly. There were no injuries in the incident.

“I didn’t hear or feel anything until it landed right at my feet,” the woman, Daniella Goldberg, told Hadashot TV news. “I tried not to let the incident distract me from my prayers,” she said, “may we all be blessed.”

In the wake of the unusual incident, the mixed-gender prayer area was closed, and Israel Antiquities Authority personnel were called to the scene to assess the situation.

The Ezrat Yisrael plaza has been in the past few years, a center of controversy over a plan to expand the egalitarian prayer area to cater for the holy site’s more liberal visitors. 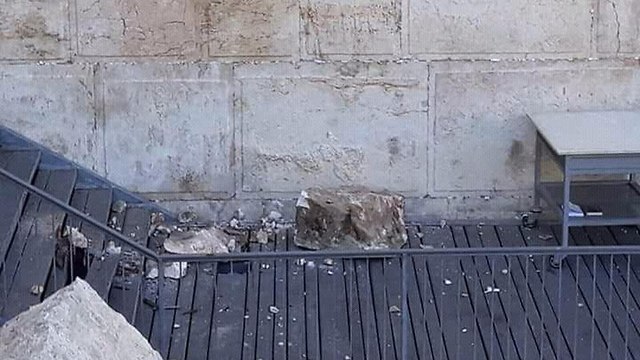 Only a few weeks ago, the members of the ministerial committee tasked with authorizing the plaza’s renovations, submitted their resignation one by one.

The massive rock fell just hours after the evening prayer that concluded the Tisha B’Av fast, when the Western Wall is particularly crowded with worshipers.

Security cameras at the site captured a woman praying late at night when one of the Wall’s rocks smashed several meters from her. The frightened woman immediately escaped the scene.

“A big disaster was prevented,” said Yizhar Hess, the executive director and CEO of the Conservative Movement in Israel. “The Western Wall, which has been standing with Israel for many generations, has reminded us that it too has to go through routine engineering inspections. The professionals are already there.”

Hess noted that while the prayer balcony adjacent to the Western Wall will be closed until further notice, the egalitarian prayer area itself will remain open.

“Both of the Kotel’s sections should be inspected in order to prevent, God forbid, a grave disaster in the future,” he concluded. 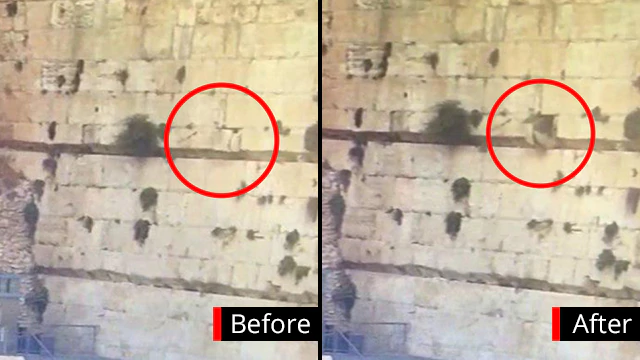 In an Ynet interview, Hess added that “If, God forbid, a stone detached a day earlier, worshipers would have gotten hurt.”

“The Israel Antiquities Authority is looking into the matter right now. Jerusalem Mayor Nir Barkat, as well as the district police chief and the district’s archeologist, also arrived at the scene,” Hess went on to say.

According to Hess, “This is not something common and has not happened in the past. It could be because of fatigue. The Western wall is the object of our prayers and a memory of the Temple. However, it is also a 2,000-year-old retaining wall, and it should be examined from an engineering point of view.”

“I admit I’m more anxious about the more well-known segment of the Western Wall, since there the prayer is longer, hence if a rock is to detach from it, the disaster might be much graver,” he said.

“I hope that at the next inquiry committee, no one asks why the Western Wall was not inspected after the first rock had fallen from it. In my opinion, this should be the top priority this morning,” Hess asserted.

Western Wall Rabbi Shmuel Rabinovitch said that “It’s an extremely unusual and rare incident, which has not occurred for many years.

“The fact such powerful incident happened after the Tisha B’Av fast, during which we mourned the destruction of the First and Second Temples, triggers questions too complex for the human soul to contain and requires soul searching.”

In a statement, the Jerusalem municipality said that “After the fall of the stone in the Ezrat Yisrael plaza, Jerusalem Mayor Nir Barkat, the city’s engineer and members of the department of hazardous structures arrived at the scene.

“The city’s engineer issued a hazardous structures’ order and the area was fenced off to preventing entry until the Israel Antiquities Authority looks into the matter.

“In the upcoming days, the Antiquities Authority will map the stones, aiming to preserve them and eliminate any danger,” the statement concluded.

In this article:Finance, Western Wall