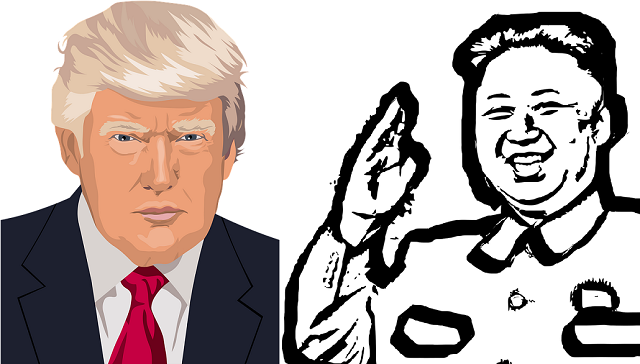 As with much of Donald Trump’s defense policy planning, the president’s current nuclear strategy seems to be advancing ad hoc, as a more-or-less impromptu response to certain perceived changes in North Korean threat levels. Looking ahead to the Singapore meeting next week, this haphazard policy movement suggests that Mr. Trump will likely negotiate enemy denuclearization just as he would approach real estate bargaining in Manhattan or Las Vegas. Plausibly, because Kim Jung Un will never agree to part with his one indispensable and continuing source of global power and influence, the US president has already locked himself into a blatantly no-win negotiating posture.

There is, however, a thoughtful way out for Washington. To begin, attitude is not more important here than preparation. Mr. Trump ought to finally understand that the only reasonable meaning of “denuclearization” for his North Korean counterpart could be a cessation (whether temporary or permanent) of Kim’s nuclear weapons testing. Thereafter, consulting literally decades of carefully worked out strategic theory concerning asymmetrical nuclear powers, the president will need to appreciate the utterly core US requirement of implementing long-term nuclear deterrence with Pyongyang, a requirement that will need to account not only for the two principal adversaries “in play” (the US and North Korea), but also for Russia, China, Japan, and assorted US European allies.

Mr. Trump will also need to proceed with a suitably fashioned analytic template, a posture that could account for both the rationality and intentionality of primary enemy decision-makers in Pyongyang.

In essence, Washington should approach the North Korean nuclear threat from a more suitably disciplined intellectual and conceptual perspective. This means, inter alia, factoring into any coherent US nuclear threat assessment (a) the expected rationality or irrationality of all principal decision-makers in Pyongyang; and (b) the foreseeably intentional or unintentional intra-crisis behaviors of these same enemy decision-makers.

In Washington, it is high time to become substantially more scientific in such matters, and to proceed self-consciously beyond the manifestly self-demeaning models of commercial marketing and narrow domestic politics. Accordingly, if a basic two-fold distinction is made regarding both the rationality and intentionality variables, four logically possible and intellectually useful categories/scenarios will result.

In time, these potentially instructive narratives could prove useful to fashioning America’s long-term nuclear security policies, not only in particular regard to North Korea, but also to assorted other potential adversaries.  They should be carefully prepared and closely examined by the president’s aptly senior planners and strategists. Subsequently, all four resultant models could be further nuanced or finessed by the introduction of certain important additional factors.

To begin, the president’s counselors must prepare to consider the following decision-making “template”:

Both US and North Korean leaders are presumed fully rational (i.e., each values national survival more highly than any other preference or combination of preferences), and any nuclear exchange between them would be the result of fully deliberate decision choices by one or both of the pertinent decision-makers;

Both sets of leaders are presumed fully rational, and any nuclear exchange between them would be the result of certain unintended decision choices made by one or both of them;

Either US or enemy leaders, or both, are presumed irrational, and any nuclear exchange between them would be the result of still fully deliberate decisional choices made by one or both; and

Either American or North Korean leaders, or both, are judged irrational, and any nuclear exchange between these adversarial leaders would necessarily be the outcome of certain unintended decisions made by one or both.

In such bewilderingly complex strategic matters, nothing can be more practical than good theory. Always, generality is the key to specific meanings and predictions. Always, such comprehensive policy explanations could help guide President Trump well beyond otherwise vague or impromptu appraisals of adversarial nuclear conflict possibilities.

Under no circumstances, the president must be reminded,  should such multi-sided crisis possibilities be treated or reciprocated (implicitly or explicitly) on a routinely ad hoc basis.

The main reason for this prescription is textbook-simple. Inevitably, science-based probabilities must be drawn from the determinable frequency of relevant past events. In these particular nuclear cases at hand, however, there are no such pertinent past events.

Any nuclear crisis between Washington and Pyongyang would necessarily be scientifically unique or sui generis. It follows, among other things, that President Trump and his principal national security advisors ought never become overly-confident about predicting nuclear crisis outcomes, or even about their own presumptive expertise in being able to handle such crises.

In essence, and also by definition, there are no experts in such strategic matters. Logically, no one in Washington could meaningfully be judged an expert on nuclear war. For President Trump, especially, the cautionary significance of this core observation should never be  underestimated.

But for Mr. Trump, there is still much more to assess.

Capable American strategic analysts guiding the president must enhance their planned nuclear investigations by identifying the basic distinctions between intentional or deliberate nuclear war and between unintentional or inadvertent nuclear war. The derivative risks resulting from these different types of possible nuclear conflict are apt to vary considerably. Correspondingly, those analysts who would remain too completely focused upon a deliberate nuclear war scenario could too-casually underestimate a more salient and cumulative enemy nuclear threat to the United States.

Most critical here are those significant errors in calculation committed by one or both sides – more-or-less reciprocal mistakes that could sometime lead directly and inexorably to a nuclear conflict. The most blatant example would concern assorted misjudgments of enemy intent or capacity that might somehow emerge during the course of any one particular crisis escalation. Such misjudgments would expectedly stem from a mutual search for strategic advantage occurring during competition in nuclear risk-taking.

In more expressly strategic parlance, this would mean a more-or-less conspicuous multi-party search for “escalation dominance.”

To achieve a proper start in this sort of required theorizing, US analysts would first need to pinpoint and conceptualize all vital similarities and differences between deliberate nuclear war, inadvertent nuclear war, and accidental nuclear war.  Doing this correctly will require mindful preparation, not mere attitude.

There would then also need to be various related judgments concerning identifiable expectations of both rationality and irrationality within each affected country’s core decision-making structure. A potential source of unintentional or inadvertent nuclear war could sometime be a failed strategy of “pretended irrationality.” A posturing American president who had too “successfully” convinced enemy counterparts of his own irrationality could thereby spark an otherwise-avoidable enemy preemption.

In more specifically legal or jurisprudential terms, this enemy might then choose to identify (either reasonably or unreasonably) the already-launched preemption as permissible “anticipatory self-defense.”

“Played” in the other direction, an American president who had begun to take very seriously Kim Jung Un’s unpredictability could sometime be frightened into striking first himself. In this alternate case, Washington would become the preempting party that could then claim legality for its allegedly defensive first-strike. In any such dicey circumstances, those US strategists charged with fashioning an optimal strategic posture should consciously recall Carl von Clausewitz’s oft-quoted warning (in On War) concerning “friction.”

This famously “Clausewitzian” property represents the unerringly vital difference between “war on paper” and “war as it actually is.” It’s not a distinction determinable by attitude.

Also possible, amid any such chess-like strategic dialectics, the first “game” might end not with an enemy preemption, but instead with Washington deciding to “preempt the preemption.” Here, US president Trump, sensing the too-great “success” of his own pretended irrationality, might quickly foresee Kim’s consequent insecurity, and then decide to “strike first before he strikes first.”

In all such exceedingly complex narratives, there would be appropriate cause for concern about encountering an “infinite regress problem.” If the game were played in the other direction, it might sometime end not with a US preemption generated by overriding fears of enemy irrationality, but rather with an enemy first-strike intended to preempt a then-anticipated American preemption.

To be sure, none of these bewildering dialectical calculations are for the intellectually faint-hearted; nonetheless, they can be minimized or disregarded in Singapore and beyond only at great strategic peril. In the coming US-North Korean dialogue, advantage will not accrue to the side that has the “bigger button.” It will accrue only to the side that had correctly favored preparation over attitude.