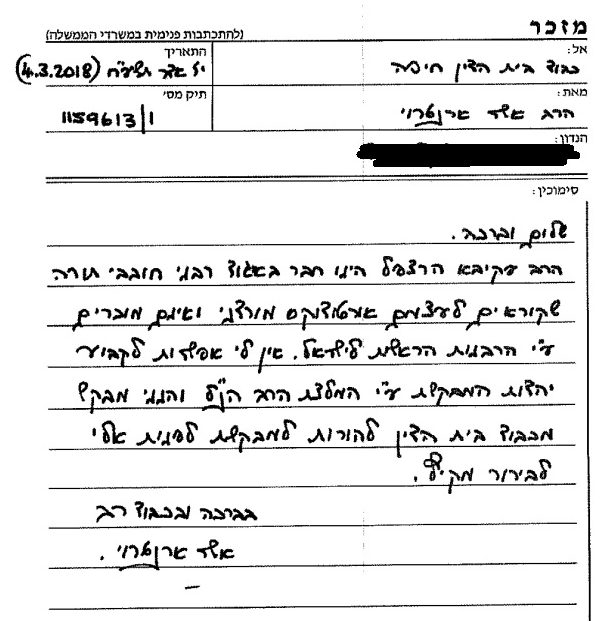 An internal correspondence document from the Rabbinical Courts, written in March 2018, and published by ITIM today (Monday), reveals that despite the Rabbinate’s consistent public declaration that there are no “blacklists” for recognition of rabbis abroad, the Rabbinical Courts continue to reject the halachic authority of at least one hundred and twenty four Modern-Orthodox Rabbis in the United States. Today, in a meeting of the Knesset’s Committee for Immigration, Absorption and Diaspora Affairs, the Chief Rabbinate’s Director, Moshe Dagan, vociferously denied the existence of any such blacklists.

According to the document, written by Rabbi Asher Ehrentreu, a senior member of the administration of the Rabbinical Courts, the Rabbis of Yeshivat Chovevei Torah, an institution established by Rabbi Avi Weiss in 1999 that certified rabbis who serve in communities across the United States, “call themselves orthodox,” and, ” are not recognized by the Rabbinate of Israel.”

With these statements, Ehrentreu refused to recognize the Jewish status of a woman who presented him with the approval of a rabbi from Chovevei Torah, and referred her to “comprehensive clarification” of her status by the Israeli Rabbinate. This is a clear regression in policy regarding the Rabbinate’s acceptance of the Orthodox rabbinate in the United States.

Rabbi Seth Farber, director of ITIM, expressed his outrage at the letter, stating that “rather than embracing rabbis around the world who are committed to Jewish continuity and observance, the rabbinate is acting out of arrogance and ignorance, perpetuating an enormous split within the Jewish community in Israel and the diaspora.

While in the past, certifications by Rabbi Avi Weiss, the founding president of Chovevai Torah, were rejected by the Rabbinate, there was no attempt to invalidate or undermine the halakhic authority of all the rabbis who belong to his yeshiva and to the rabbinical union that Weiss established, regarding the Jewishness of the members of their communities.

Rabbi Akiva Hertzfeld, the Rabbi mentioned in the document, served as Rabbi of the Sha’arei Tefila congregation in Portland, Maine, an Orthodox congregation established in 1904,  and has since made aliyah to Israel. In 2013 he was named as one of the Forward’s “36 Most Inspiring Rabbis.”

In the case in question, the woman’s Jewish identity was recognized only after a rabbinical court in Boston issued a certificate attesting to her status.

Farber, whose organization has sued the rabbinate to determine the criteria for Jewishness certification and who testified in a hearing on the matter in the Knesset on May 28, reacted to the Erentrau letter: : “The Chief Rabbinate has repeatedly claimed that there are no blacklists. However, the testimony of an orthodox rabbi was rejected only because he belonged to an institution that the Rabbinate doesn’t respect. The Rabbis’ behavior in this case is first and foremost, dishonest. They make all kinds of statements in order to eliminate harsh criticism, but, ultimately, under the sway of the more extremist elements among them, they do not rule in line with their statements.”

“The Erentrau letter contravenes Jewish law and tradition. Throughout the generations, there have been Jewish communities throughout the world with different halachic approaches. Nevertheless, the communities treated each other with respect and recognized each other’s halakhic authority. ”

The Chief Rabbinate’s attitude toward Rabbis of Chovevei Torah stirred up a storm in early 2014, when the rabbinate threw into question the Jewish certifications of Rabbi Avi Weiss, the founder of Yeshivat Chovevei Torah and one of the most influential orthodox rabbis in the United States, , citing “uncertainty as to his commitment to Jewish law.” At the time, publication of the Rabbinate’s letter raised a voice of protest from many orthodox rabbis in the United States and led to the capitulation of the Rabbinate, which  announced that after examining the issue, Rabbi Weiss’s Jewish credentials would be recognized. This newly discovered document shows that public statements aside, the Rabbinate’s actions tell a different story.

Assaf Benmelech, Chairman of Ne’emanei Torah Va’Avodah and Rabbi Herzfeld’s lawyer: “The scandalous letter found in the rabbinical court file shows that the Chief Rabbinate and the rabbinic courts rejected Rabbi Akiva Herzfeld’s testimony about the Jewishness of his community because of his affiliation with “modern Orthodoxy.” This is a position that reflects ignorance and abandonment. It also refutes the attempts of the Chief Rabbinate to ignore the fact that it is a coincidence that rabbis affiliated with the moderate Orthodox circles in the United States are rejected by it over and over again. This is the result of abandoning the religious system in Israel to haredi hands: arbitrary decisions, and a severe blow to the delicate fabric of relations with Diaspora Jewry”.

The Knesset meeting today was requested by ITIM, in another attempt to clarify the criteria the Rabbinate require rabbinical courts to meet in order to be officially recognized by the Israeli Rabbinate. While the Rabbinate claims these criteria were drawn up and submitted privately to the committee chairman, they refused to reveal them until they received approval from the Chief Rabbinate Council.

Rabbi Akiva Herzfeld, whose letter was rejected, noted after the hearing that he was sickened by what transpired in the Knesset. “I was saddened to see that the decisions of who is accepted as a rabbi are in the hands of a few small minded individuals who don’t understand what is really going on in North America. I wrote a letter knowing the individual was Jewish and was shocked when she received a phone call saying that the Rabbinate knew better.  Their behavior is inexcusable.”