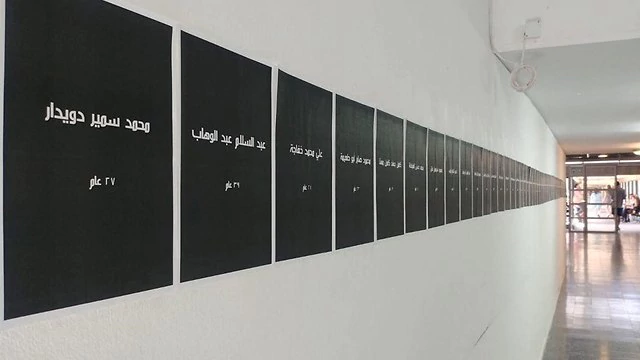 Dozens of black signs were hung Wednesday in the memory of Palestinians fatalities in the Gaza border fence riots in the entrance of Bezalel Academy of Arts and Design in Jerusalem.

Names and ages of those killed were written on the signs.

Please help us out :
Will you offer us a hand? Every gift, regardless of size, fuels our future.
Your critical contribution enables us to maintain our independence from shareholders or wealthy owners, allowing us to keep up reporting without bias. It means we can continue to make Jewish Business News available to everyone.
You can support us for as little as $1 via PayPal at office@jewishbusinessnews.com.
Thank you.
One of Bezalel’s students voiced her resentment of the signs, saying, “They decided to hang signs with the names of terrorists, but most of the students are silent. A lot of people show their support of the Palestinians, but glorifying human beings that their only goal is killing Jews is not the way.”

The student noted how, in the past, some hung signs about the residents of the settlement of Gush Katif who were forcefully removed from their homes, and that it didn’t take too long for those signs to be removed as well.

“It doesn’t make sense,” she decried. “It causes me pain to go inside the university and see that those signs are still there,” especially, she noted, in light of the university’s strong left-wing leaning.

“People are silent (about this) because they’re afraid to speak up,” she lamented. “I cannot remove them myself because they will say that I am infringing on their freedom of expression. It will also not help because it will only spur them even further.” 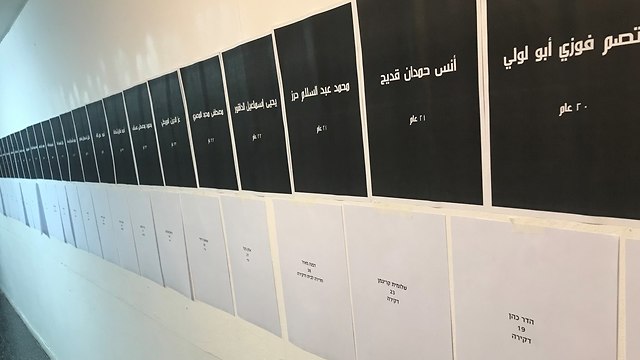 However, another student who took part in hanging the signs contradicted her, claiming “some students tried to tear them down and threw some of them into the trash,” adding that, at the very least, “if the signs irritated them—at least I did something,” alluding to her dismay at the students’ apathy towards the incident.

She, along with some 25 others, organized using a private Facebook group for Bezalel’s Arab students to raise awareness of the issue.

“There were people who were killed in Gaza even though they were not terrorists,” she said. “For example, an eight-month-old girl was killed—was she a terrorist? We are all Palestinians, we are all one people and this is the only way we can make our voice heard.”

Hours later, students at the school hung white signs underneath the black ones with the names, age and cause of death of Israeli citizens slain in terror attacks perpetrated by Hamas. 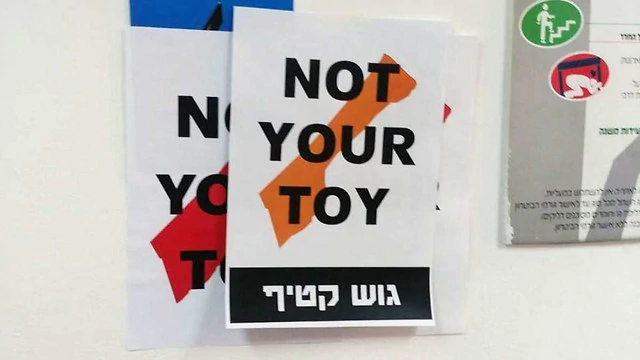 Members of Knesset also protested against the signs, although Arab MKs asserted speaking against Israel’s ‘cruel massacre’ should be commended.MK Yoav Kish (Likud) joked that “this time the students (of Bezalel) chose to be creative in their contempt of values. They confuse freedom of expression with basic morality.”

MK Yifat Shasha-Biton (Kulanu), an educator and lecturer at the academy, said, “We must put an end to the absurd phenomenon in which, in the name of freedom of expression and art, people in academia are allowed to say and do whatever they want and to discredit the IDF soldiers who defend them as well.”

MK Haneen Zoabi (Joint List), meanwhile, welcomed the signs, saying Bezalel has an “atmosphere of openness” that is different from the ones in other Israeli academies, which she said have remained “thunderously and horrifyingly silent” in the face of the “cruel massacre” on the border, lamenting the fact that “only Arab students … found a logical way to protest against the horror of the mass murder in Gaza.”

Bezalel Academy of Arts and Design issued a statement in response, saying, “The University is a protected space for freedom of speech that allows the students free, critical and creative discourse about matters concerning them.”