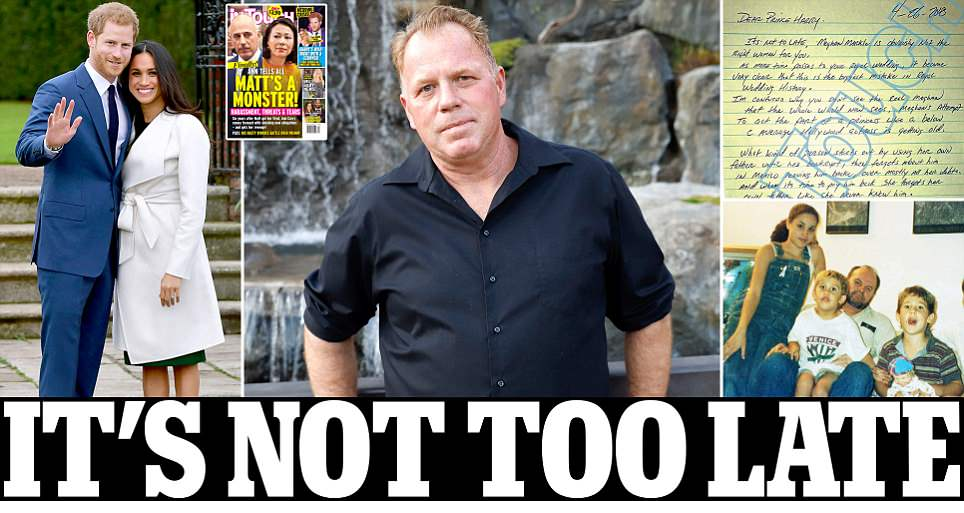 The last thing Megan Merkel needs now is negative publicity. Two weeks before her wedding, Thomas Merkel Jr., the half-brother of the former “Suits” star published an open letter to Prince Harry warning the British monarch not to make the “mistake of his life.”

“She is a shallow, haughty woman who will turn your family heritage into a joke,” he wrote and adds that “as time passes, it becomes increasingly clear that this will be the greatest mistake in the history of the monarchy.

The letter was originally published in “InTouch” and then in the Daily Mail, where there were about 6,500 responses, a record number for the item on the site.

Merkel Jr. says he has not seen his half-sister since their grandmother’s funeral in 2011, and he believes the former actress will draw the monarchy down, embarrassing the prince and not being the right woman for him.

He reveals how Merkel dragged their father into debts that he still does not recover from, and all in order to support her acting career.

“What daughter extorted her father and then left him alone in bankruptcy in Mexico? You and the royal family have to put an end to this fake Cinderella story before it’s too late.”

In the letter, Merkel also told how their father was not even invited to the wedding. “She does not invite her family and instead invites complete strangers, who does that? Merkel turned to the Prince himself in a desperate attempt to stop him marrying her. Megan is not the right person for you, I do not understand how you do not see the real Megan Merkel, her attempt to play the role of a princess, like a third-rate actress, really old-fashioned already. ” 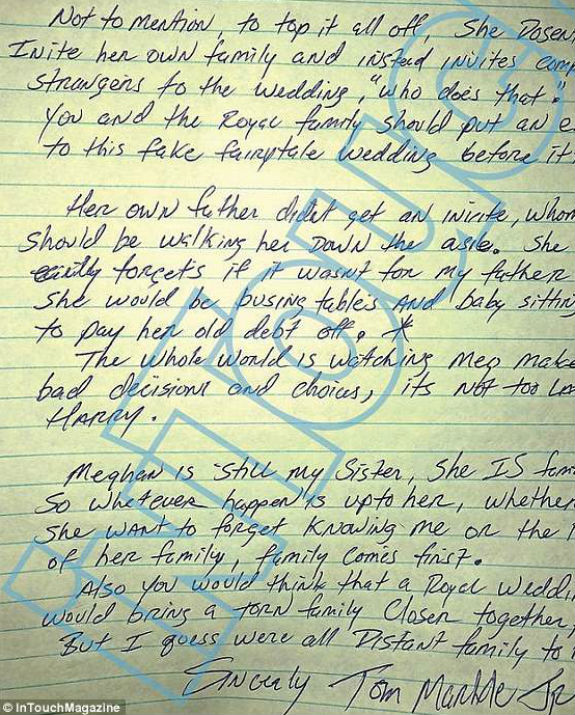 Merkel, 33, had gone a long way until she touched fame. She had struggled for several years before starring in the successful American series and before that she ran a secret blog detailing her troubles as a Hollywood actress, revealing the crises and struggles, and shedding light on the illusions industry. In light of all this, it is not in vain that many Britons feel that it is a fraud, too much of an effort and who wants to climb up the social ladder at any cost.

Many surfers do not want to see her next to her beloved prince, Harry, because they do not believe she deserves him.

Merkel adds that “she has no respect for the British tradition” and in recent days published quite a few items about how she looks bored at the ceremonies and who does not really bother to dwell on the protocol of the royal family.

It seems that more and more Britons do not like Merkel, to say the least, and it is light years away from becoming a Middleton II, considered classic, noble and real, or the late Princess Diana who became the princess of hearts.

If at first many saw her as “modern Grace Kelly” and pointed out the different ways in which Merkel changed the face of the traditional royal family (divorced, daughter of a black mother, American), they realized that Merkel was not really a role model but someone who did not dress very well in memorials Security and dependence each time she holds Prince Harry’s arm like a 6-year-old girl, in contrast to the strong persona she had before contacting him.

It is clear that Merkel goes through many difficulties and she is facing a lot of pressure from many directions in an attempt to find herself in the drama of her life. And this is only the beginning. She must internalize the codes and norms of the royal family before it is too late.

Although an expert in the history of the royal family noted that unlike Princess Diana or Sarah Ferguson, Merkel comes to a more mature “role” and not about twenty so she can cope with the loss of privacy, constant gossip and be giving up career more successfully.

As is well known, this is a way of life that is light years away from someone who got used to the life of La La Land in Hollywood, when she has to remember that this is only a representation of the royal house.

Beyond that, people also wonder how truly “caring” she is, as she presents herself, since no one has ever seen the two dogs who have lived with her in Canada since she moved to London.

Did she abandon them as she had “abandoned” her father? It is not clear what is happening there, but it is doubtful whether Harry will listen to him. Especially now that all invetations have been sent.