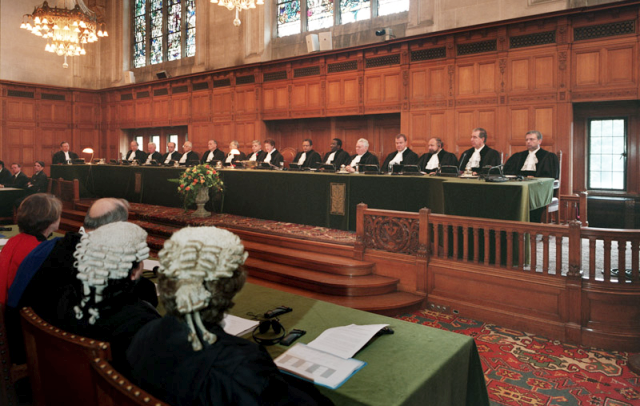 “The martyrs are our children and they are our families. They honor us….” (Mahmoud Abbas, PA President, Speech to PLO Central Council, January 14, 2018)

Judging from recent comments by Mahmoud Abbas, Palestinian Authority president, one might wrongly conclude that international law can somehow favor crimes of war, crimes of terrorism and crimes against humanity. To accept such a bizarre conclusion, however, an observer would first have to confuse authoritative legal norms with the subjective hopes and preferences of a long-tarnished insurgent movement. Jurisprudentially, at least, any such confusion would make instant mockery of established legal principles concerning national self-determination and justice.

Ex injuria jus non oritur. In law, all law, rights can never derive from wrongs. This core principle is notably “peremptory,” or deeply fundamental. Inevitably, therefore, those who would seek to justify the willful maiming and execution of noncombatants in the name of some abstract ideal, any ideal, are defiling the law.

Even more specifically, whenever Palestinian leaders insistently claim a legal right to “any means necessary” against the “occupation,” this disingenuous claim is contrived.

Simply calling murderous insurgent fighters “martyrs” does nothing to meaningfully absolve these perpetrators from various crimes of terrorism – violations that are both codified and customary under pertinent international law.

There is more. Even if their endlessly indignant calls for “national self-determination” were somehow grounded in law, these “martyrs” would still remain tainted by egregious expressions of wrongdoing. Under settled international law, all insurgents, even those with a more-or-less supportable “just cause,” must satisfy unambiguously firm jurisprudential limits on permissible (1) targets and (2) levels of selected violence.

Following an earlier vote by the UN General Assembly, “Palestine” is now duly authorized to call itself a “nonmember observer state.” Although such a designation essentially by-passes the usually more critical expectations of legal rules regarding statehood, especially the Convention on the Rights and Duties of States (1934), most of the world is ultimately prepared to accept the reality of full Palestinian sovereignty. At the same time, any blatantly illegal expressions of insurgent force by “Palestine” must still qualify as terrorism.

It’s not bewildering. Even the most “sacred” rights of insurgency under international law can never include the planned targeting of civilians, and/or a use of force to inflict gratuitous pain and suffering intentionally. For example, it is always terrorism, prima facie, when Palestinian insurgents murder Israeli families in their homes or automobiles by stabbing and shooting their victims. It is also always terrorism when these “martyrs” place their nail-filled bombs dipped in rat poison on Israeli buses.

Even under even the most generous definitions discoverable in binding jurisprudence, the residual legal right to armed force can never supplant the peremptory rules of humanitarian international law. In this connection, such jus cogens rules are also properly known as the law of armed conflict or the law of war.

Unceasingly, without a scintilla of evidence or nuance, supporters of Palestinian terror-violence against Israelis argue passionately that the ends (Palestinian independence) justify the means (multiple deliberate attacks upon defenseless civilian populations). Leaving aside the everyday and ordinary ethical standards by which any such argument must be judged manifestly indecent, the ends can never justify the means under international law, whether conventional (treaty-based) or customary. In fact, for more than two thousand years, unassailable and unhidden legal principles have stipulated that any intentional violence against the innocent is prohibited.

From the standpoint of authoritative international law, one man’s (or woman’s) terrorist, can never be another man’s (or woman’s) “freedom-fighter.” Although sometimes fashionable to suggest at cocktail parties, this too-common expression is little more than an empty witticism. It is true, of course, that certain insurgencies can sometimes be judged entirely lawful or even law-enforcing (that judgment is, after all, a founding principle of the United States), but even such presumptively allowable resorts to force must still conform to the laws of war.

Whenever an insurgent group resorts to manifestly unjust means, its actions constitute terrorism. Even if ritualistic Palestinian claims of a gratuitously hostile “occupation” were plausibly reasonable rather than fabricated, corollary claims of entitlement to “any means necessary” would still remain entirely false.

International law has a distinctly precise and determinable form and content. Among other things, it cannot be casually invented and reinvented by terror groups or “nonmember observer states” simply to justify various selected interests. This is especially the case where terror violence intentionally targets a designated victim country’s (in this case, Israel) most fragile and vulnerable civilian populations.

National liberation movements that fail to meet the test of just means are never protected as lawful or legitimate. Even if we were to accept the spurious argument that the PA, Hamas and assorted sister groups could somehow meet the authoritative criteria of “national liberation,” they would still not meet equally relevant legal standards of discrimination, proportionality, and military necessity. Significantly, these critical standards were expressly applied to insurgent or sub-state organizations by the common Article 3 of the four Geneva Conventions of 1949, and (additionally) by the two 1977 Protocols to these Conventions.

Basic standards of “humanity” are also binding upon all combatants by virtue of certain broader customary and conventional international law, including Article 1 of the Preamble to the Fourth Hague Convention of 1907. This rule, commonly called the “Martens Clause,” makes all persons responsible for the “laws of humanity” and for associated “dictates of public conscience.”

To be sure, American and European supporters of full Palestinian statehood continue to presume that this Arab party would become a willing part of a “two-state solution.” Nonetheless, this generous presumption is simultaneously dismissed everywhere in the Arab/Islamic world. Cartographically, the “Map of Palestine” at the official website of the Palestinian National Authority and also of Hamas (The Islamic Resistance Movement) still includes all of Israel.

Only one state is depicted on this revealing map. That state is not Israel. On this map, Israel appears only as “Occupied Palestine.”

Under binding world law, terrorist crimes mandate universal cooperation in both apprehension and punishment. Inter alia, as punishers of “grave breaches” under international law, all states are expected to search out and prosecute, or extradite, individual terrorists. In absolutely no circumstances are states permitted to regard terrorists as legitimate “freedom fighters.”

This is most emphatically true for the United States, which incorporates international law as the “supreme law of the land” at Article 6 of the Constitution, and which was conspicuously formed by the Founding Fathers according to certain timeless principles of Natural Law. Accordingly, although generally unrecognized, core legal authority for the new Republic in the eighteenth-century was derived from an openly expressed indebtedness to Natural Law in Blackstone’s supremely famous and recognizably constitutive Commentaries.

In law, all law, rights can never stem from wrongs. Even if Mahmoud Abbas and his Palestinian Authority continue to insist on treating the most recalcitrant insurgents among them as heroic “martyrs,” this treatment can have no exculpatory or mitigating effect on attendant terrorist crimes. Irrespective of the justness of any cause – and this includes any alleged right to full sovereignty for “Palestine” – nothing under international law can justify the deliberate targeting and killing of non-combatant populations.