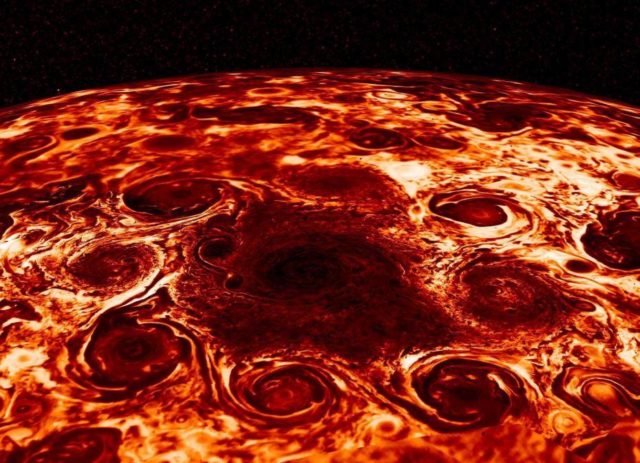 Measurements from NASA’s Juno spacecraft were analyzed to reveal that the stripes – belts of cyclones circling the planet – extend to a depth of about 3,000 km. That is quite a bit more than previous estimates, and it is revising scientists’ picture of Jupiter’s atmosphere as well as its inner layers, according to the Weizmann Institute’s Prof. Yohai Kaspi who led the research.

Juno orbits Jupiter every 53 days, and it is giving researchers a chance to “see” what lies below the planet’s surface. Among the measurements Juno beams back to Earth are those of the planet’s gravity field. This is done via radio waves: As the planet’s gravity pulls on the spacecraft in its flyby, the radio signal is also shifted a bit; this shift in the wavelengths, though tiny, is measurable. And since the flybys are in different orbits each time, they can sample the gravitational field of different parts of the planet. 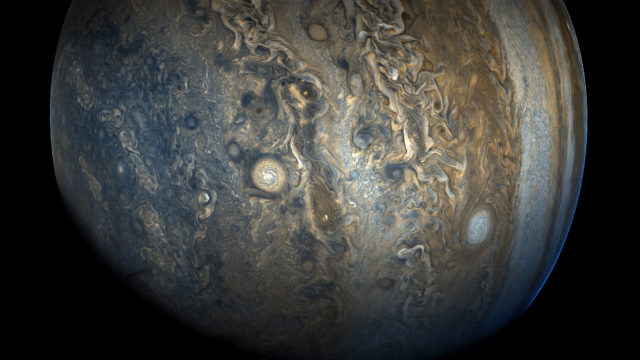 Kaspi, together with Dr. Eli Galanti, had been preparing for this analysis even before Juno was launched nearly seven years ago. During this time, they built mathematical tools to analyze the gravitational field data; these are what would enable the researchers to get a grasp on Jupiter’s atmosphere. The wind belts that encircle the planet, explains Kaspi, are much stronger than the fiercest winds on Earth, and they have lasted for at least hundreds of years. As these jets flow in bands from east to west or west to east, they disrupt the even distribution of mass on the planet. Thus by measuring the imbalance – changes in the planet’s gravity field – their analytical tools would be able to calculate how deep the storms extend below the surface.

Based on the asymmetry in the gravitational fields between north to south, the researchers determined that the wind belts – these stripes observed by Galileo – extend 3,000 km deep. Moreover, Kaspi and Galanti developed a method of determining not only the overall depth of the flow, but also precisely how those flows, hidden beneath Jupiter’s clouds, change with depth.

The calculations based on these findings show that Jupiter’s atmosphere is 1% of its total mass. That may not sound like a lot, but in comparison, Earth’s atmosphere is less than a millionth of its total mass. “That is much more than anyone thought and more than what has been known from other planets in the Solar System,” says Kaspi. “That is basically a mass equal to three Earths moving at speeds of tens of meters per second.”

Three papers published today in Nature answer a question that scientists have been asking ever since Galileo first observed the famous stripes of Jupiter: Are the colorful bands just a pretty surface phenomenon, or are they a significant stratum of the planet?

The first of the three Nature papers, led by Prof. Luciano Iess of Sapienza University of Rome, presents the findings of asymmetry in the gravitational fields.

The second describes the results obtained by Kaspi, Galanti and their colleagues showing the distinctive depth of Jupiter’s atmosphere.

The third, led by Prof. Tristan Guillot of the Observatoire de la Cote d’Azur, looks below the atmosphere, suggesting that beneath the level of the winds, the gas rotates more or less as a single body, almost as if it were a solid.

These three papers are helping build a new picture of Jupiter − from the upper cloud-level inwards.

The subject of Jupiter’s core is not yet closed, and the researchers aim analyze further measurements to see whether Jupiter has a solid core, and if so, to determine its mass. Answering this question may help us understand how the Solar System and its planets formed. In addition, Kaspi and Galanti are aiming at another iconic feature of the Solar System: Jupiter’s Great Red Spot. Using some of the same methods they developed to characterize the jet-streams, they are trying to understand how deep this giant storm extends. They hope to understand, among other things, why this storm, which has been stable for as long as telescopes have existed, has been shrinking in recent years.

In this article:NASA, Jupiter, Finance, Space