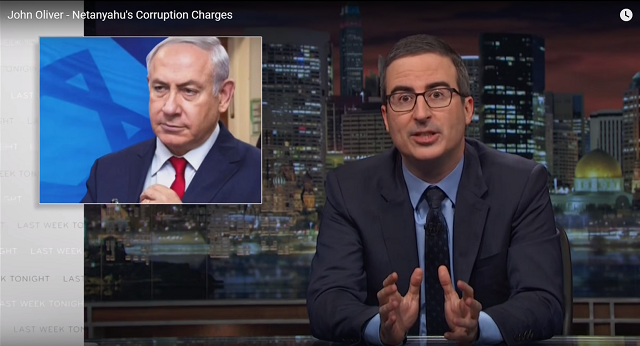 In the opening episode of the fifth season of HBO show, “Last Week with John Oliver,” which took place Sunday night in the United States, TV host John Oliver chose to focus on none other than Prime Minister Benjamin Netanyahu and his wife, Sara Netanyahu.

Oliver referred to the police’s recommendations to indict Netanyahu for bribery and did more to repeat the old accusations about the candles, the ice cream and how not, the double bed on an El Al plane that took the couple to Margaret Thatcher’s funeral.

Oliver’s researchers did a good job and came to the video in which the interior designer Moshik Glamin went around the prime minister’s house next to Sarah Netanyahu “to show the nation which pile of shit they live in.”

Oliver then played a clip from the infamous 2015 interview that interior designer and TV star Moshik Galamin conducted with Sara Netanyahu during a tour of the Prime Minister’s Residence.

“The whole thing is in pretty bad taste,” said Oliver,” although there is one moment that really elevates it. See if you can spot it.”

Glamine’s fifteen seconds of fame on American television amounted to Oliver’s utter amazement at the very insensitive joke when Galamin thumps on a cupboard in the dining room and remarks: “I think Anne Frank is hiding here in the back.”

And Oliver couldn’t help but wonder what everyone else has been thinking: “At no stage in the editing process did they consider cutting the part, ‘Everything looks good but maybe we’ll give up the joke with Anne Frank?'” He wondered.

In this article:Finance, PM under investigation, Israeli PM Benjamin Netanyahu