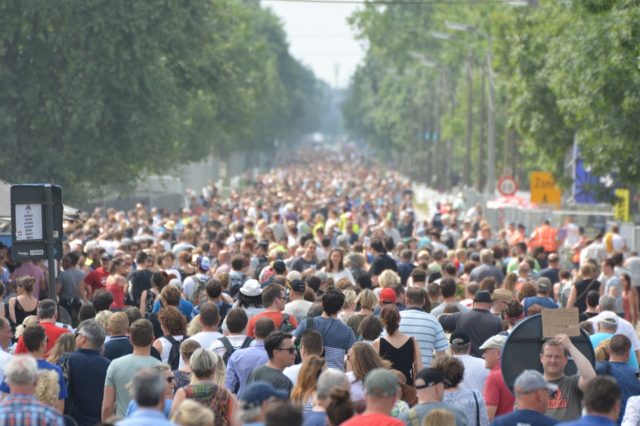 “Conscious of his emptiness, a man tries to make a faith for himself in the political realm. In vain.”

Nowadays, in the midst of near-perpetual scandal, both Democrats and Republicans are variously criticized for failing to fix a beleaguered country. But America’s core problems are not remediable in politics. By itself, no American government — no president, no congress, no promised barrage of “transformative” legislation, no purported investigations — can halt the corrosive withering of heart, body, mind and spirit that most deeply imperils these United States.

Indeed, no matter how well intentioned, informed, or generously bipartisan, no proposed rescue program can ever do more than tinker ineffectually at the outer margins of what really matters.

It is plausible, of course, to expect certain auspicious increments of progress from particular statutes and institutions, but nothing that could meaningfully drown out the lamentations of our lonely American “crowd.” Driven almost single-mindedly by considerations of taxation, commerce, and consumption, our system of governance has managed to produce a sorely bitter amalgam of plutocracy and mob rule. Unsurprisingly, our hoped-for national rescue must now lie elsewhere, that is, suitably far beyond the always-secondary spheres of government, law and economics.

“The crowd,” warned Danish philosopher Søren Kierkegaard, “is untruth.” Within our current American crowd (Freud would have called it a “horde,” Nietzsche a “herd,” and Jung, a “mass”), loudly proclaimed differences remain essentially beside the point. This is because no purposeful national renewal, let alone a renewed “greatness,” can ever originate from politics. Whether Democrat or Republican, Liberal or Conservative, political behavior is merely what the philosophers and the social scientists would both call a “reflection.”

Unwittingly, perhaps, every society ultimately mirrors the sum total of its constituent human “souls.” These individual souls, seeking some form or another of apt “redemption,” can never be healed by any postures of shallow imitativeness, mass taste, or empty slogans. Before there is any genuine mending of America, there must first take place a proper transformation of its citizenry.

Our pertinent problems here are patently stark, but they are not unfathomable. In fact, it’s not really all that complicated. Briefly put, we Americans timorously inhabit a society so numbingly craven and so openly false that even our visceral melancholy has become contrived.

There is no call here for prescriptions to be offered sotto voce. For societies huddling uneasily at the edges of history — and America is quintessentially just such a society — emptiness is not whispered or complicated. Always, it radiates in both directions, continuously, from individual to collective, and vice versa.

There is still more necessary detail. Wallowing in the dim twilight of a near-desperate conformance, we the people display infinite forbearance for surface thinking and demeaning amusements. With its so many misdirected resentments, our people still generally hide from the most basic and indispensable affirmations of personal intellect. Now, unambiguously, America actively cultivates a collective posture of anti-reason.

In time, it becomes a profoundly lethal spirit.

Incontestably, it is today the principal animating ethos of American politics.

Who reads serious books these days? Let us be candid. Virtually none of our national leaders could answer “yes” to this question, and their acknowledged incapacity usually turns out to be a tangible political asset. In other words, most Americans generally loathe any hint or obligation of an intellectual life, and many prefer that their elected political representatives share openly in this conspicuous hatred.

There is more. Although many Americans remain seemingly content with  still-latent hopes or expectations for personal wealth, even the richest among us may actually be deprived. To be sure, while grimly resigned to a dreary future of suffocating banalities and unsatisfying work, even the most “well-off” Americans may lurch thoughtlessly from one personal forfeiture to the next, convinced that erudition creates a needless burden, and that cultivated rancor offers a commendable substitute.

Ironically, certain basic truths in America remain entirely unhidden. Expressed as genre, the “life of the mind” in our distracted country has become a discernibly thin text, one best categorized under a heading of “fiction.” Ralph Waldo Emerson’s earlier advice that we Americans should seek “plain living and high thinking” has already been fully reversed, or “turned on its head.” Unassailably, even our best universities are quickly becoming little more than expensive training schools, starkly (and sometimes proudly) bereft of any tangible “higher learning.”

Significantly, the so-called “Trump University” was never an entirely unique or singularly egregious manipulation of traditional intellectual standards. Rather, its plainly grotesque model of “education” was presaged by some of our long-standing and more genuinely authentic universities. In fact, it is not uncommon today for even the most elite educational institutions to cheerfully exchange academic legitimacy for promises of cash on the barrelhead.

Despite increasingly widespread calls for “diversity,” our national landscape is largely homogeneous on certain core matters of a deeper significance. Wherever one looks, we the people are no longer motivated by much of any enduring human value. Generally, for example, we don’t look for equanimity or balance as a healing counterpoint to distressingly frenetic lives. Instead, we search constantly and vainly for expanding opportunities to buy into an unsatisfying life of narrow imitation, one dedicated to assorted empty pleasures and easily-available chemical diversions.

To wit, tens of millions of our more-or-less exhausted citizens now consume enough alcohol and drugs to suffocate any still-lingering wisdom and to drown out whole oceans of sacred poetry.

Still, not everything is obvious. There are some distinctly consequential intellectual nuances to our dilemma. Accordingly, it is possible for we the people to be lonely in the world, or lonely for the world. Somehow, however, our leveling mass culture has managed to produce both kinds of loneliness.

Looking ahead, before a more noble and generous America can be born from any such bifurcated loneliness, we will first have to learn to look diligently beneath the news.

For the moment, whatever is being decided in politics, we Americans will be carried forth not by any identifiable nobility of “high thinking and plain living,” but instead by sorrowful eruptions of private fear and collective agitation. At times, we the people may wish to slow down a bit and smell the roses, but our increasingly battered and battering country will likely still impose upon us the hideously merciless rhythms of a grinding and unstoppable machine. Among other things, the expected end of all this breathless delirium could keep us from remembering who we once were, and, even more importantly, who we once might have become.

If politics can never save us, where then shall we turn? What, if anything, can be done to escape the pendulum of our own mad national clockwork? We routinely pay lip service to the high ideals of the Declaration and the Constitution, but almost no one truly cares about these musty old documents. Invoked only for effect or ostentation, the legal and philosophical foundations of the United States have already become the insignificant province of a tiny and grievously irrelevant minority.

It didn’t always have to be this way. In fact, we Americans inhabit the one society that could have been different. Once, we possessed a commendably unique potential to nurture individuals to become more than just cogs in a compliant machine. Emerson, after all, had described us optimistically as a people guided  by industry and “self-reliance.”

Now, however, our true motivators lie more obviously in “fitting in,” in anger, in greed, in fear, and in a perpetual trembling.

In spite of an insistently proud claim to “rugged individualism,” we Americans are shaped most decisively by the mass. As visible manifestations, our fragmented and inelegant society positively bristles with annoying jingles, coarse hucksterism, infantile allusions, and telltale equivocations. Surely, we must soon inquire: Isn’t there anything more to this noisy and suffocating country than an illiterate politics, raw commerce and hideously cheap entertainments?

“I celebrate myself, and sing myself,” said the poet Walt Whitman, but today the American Self is under steady assault by a vast and rancorous mediocrity, and also by a literally epidemic gluttony.

In the end, credulity remains America’s worst enemy. Our still willing inclination to believe that personal and societal redemption can somehow lie in politics describes a potentially fatal disorder. To be sure, many critical social and economic issues do need to be addressed further by our government, but so too must our deeper problems be solved at the “molecular” or exquisitely personal human level.

In the end, this is the only level of any real change and transformation, a level that is not a mere reflection.

Always, in such matters, history deserves a cherished pride of place. A threatened civilization too often compromises with its underlying afflictions. To restore us, as a nation, to long-term health and real potential, we the people must first learn to look usefully beyond a perpetually futile faith in politics.

It is only when such a gainful swerve of consciousness can become a fully irreversible gesture — only when we finally choose to acknowledge the critically vital correlations between individual human growth, intellectual examination and societal harmony — that we Americans can reasonably hope to mend an otherwise “empty” nation.

This article was first published in Daily Princetonian