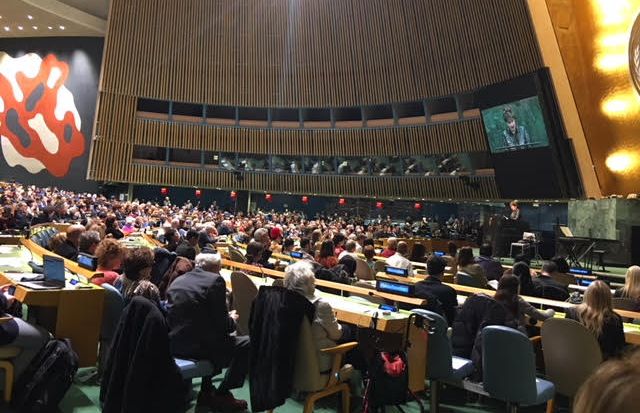 The United Nations General Assembly Hall was filled with people from around the world: ambassadors, survivors of the Holocaust and their families, relatives, and friends, who came together like they have since 2005 to pay their respect to the survivors of the Holocaust at the International Holocaust Remembrance Day. It was an extremely emotionally charged event, that once again reminded us all of the six million Jews, both children, and adults, that were killed viciously by the Nazis during the Holocaust. Each speaker who came up to the stage paid special respect to the good people that stood strong during those hard times and reminded us that there are many humans that helped to save the Jews and people of other nationalities that were afraid and hiding. These are the righteous people that we continue to honor through the years.

In his speech, United Nations Permanent Representative of Israel Danny Danon said, “We honor the survivors and righteous gentiles who walked the tightrope separating life and death for future generations. We remember their fight for moral and goodness. Most importantly, we tell our children the unthinkable stories of this dark chapter in human history so that no tragedy of its kind will ever happen again.”

It is very important to mention that in the past year the new United Nations Secretary-General António Guterres declared that “Anti-Zionism is nothing more than the modern version of anti-Semitism,” and made it clear that the UN would not tolerate this any longer. This declaration is of course very much welcomed by Israel and the Jewish people after 70 years of little or no recognition. Only recently, in 2005, has the UN decided to host an International Holocaust Remembrance Day. It was very heartwarming to hear Secretary General Guterres speak about the Jewish people in such an admiring voice. He said, “Across the world, the state of hate is high”, and promised to do everything he can to stop this. 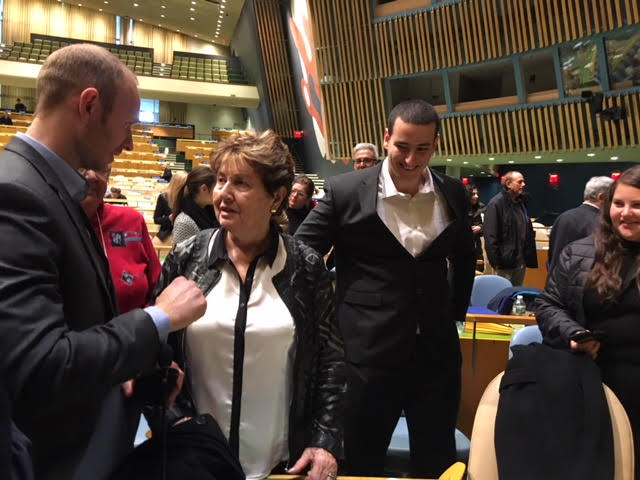 When keynote speaker, Judge Thomas Buergenthal spoke about Never Again and about all of the people who were affected by this terrible genocide he said, “Imagine the pain that never left them. Never Again will be an expression of mankind’s commitment for all to live in dignity.” He also added another very important call to action regarding modern education, “Education, in all of its forms, must start by teaching to learn and have respect for all human beings… Imagine how many scientists, explorers, and innovators could have come out of the unjustly killed people of the Holocaust.”
However, there is no doubt that the most emotional and touching speech was delivered by Eva Lavi who was accompanied to the United Nations by her daughter and her grandson. She opened her speech, “I’m standing before you a proud Israeli woman in her 80s.”

The 2-year-old little girl who grew up in Poland during the Holocaust and survived the Nazi death camps by a miracle that she herself still doesn’t completely understand. She said, “I am an ordinary woman and never knew why, and felt guilty, that I stayed alive while others vanished. I asked myself what was the reason God kept me alive? Today, I understand the reason. It is to be on this stage today, at the United Nations.” Mrs. Lavi went on to speak about her mother, without whom she believes she would never have survived, “My mother passed away in 2006. She was my hero. Once, when the Nazis were close to our room looking for children, she put me outside of the window, in the cold, and told me to hold onto a pipe and wait until she came to get me. I did not freeze. I survived.” She also spoke about Oskar Schindler, who was another angel in her story, “I was lucky to get on Schindler’s list. When the Nazis came wanting to take kids away, Oskar stood up and told them he needed me for a special task because I had such small hands.” It is amazing that in spite of her hardships, Eva believes that we can still all live with each other in peace.

Hearing Eva, I couldn’t help but think why Colette Avital, former MK and diplomat appointed to lead Israel’s umbrella group of over 50 organizations of Holocaust survivors, needs to fight for the needs of Holocaust survivors now. She fears government budget cuts could reduce assistance for needy survivors. It’s quite astonishing that she needs to fight for it when it should be available at all times.

Despite the progress that has been made, there is still work to do. There are still many members of the UN that deny the existence of the Jewish Holocaust and continue to vote and act against the state of Israel. In fact, Ambassador Danon said that “in the past 3 years the UN passed 83 resolutions against Israel and only 14 resolutions against the entire rest of the world.” Needless to say, this does not send a very positive message about Israel to the younger generation of leaders. Since Saudi Arabia now recognizes that the Holocaust did happen, we are hopeful that this will open the minds of other Muslim nation-states, and that they will listen to the truth of the little girl Eva Lavi, who is now a proud Israeli woman in her eighties.

While still recognizing the progress that has been made in the past years, it is important to remember the true and wise words of General Guterres regarding the persistence of anti-Semitism and other white supremacy groups around the world, “We must stand together against the normalization of hate. Whenever and wherever humanity’s values are abandoned, we are all at risk.” We all have a responsibility to end racism and violence. “Through education and understanding, we can build a future of dignity, human rights, and peaceful coexistence.”

In this article:Holocaust, Finance, UN