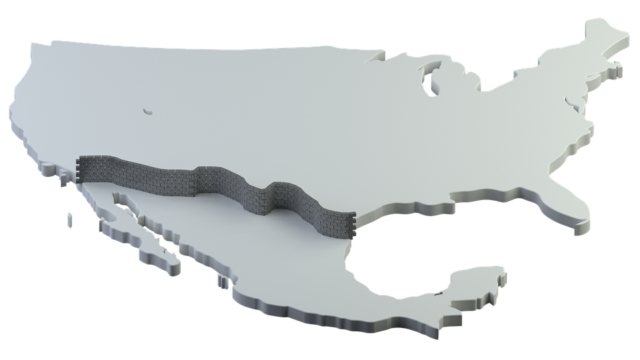 These “Mexicans” Senator Carlos Schumer of Nueva York, Senator Ricardo “Dick” Durbin of Illinois, Senator Kamala Harris of San Francisco, California, Congressman Luis Gutierrez of Chihuahua, Illinois are close to a deal with Donaldo Trump of Nueva York and Miguel Pence of Indiana and others.  When we thought that DACA would not be part of the deal for the wall, Mexicans will finally build the wall with American pesos.
I can see one company taking the lead in construction influenced by the POM or President of Mexico and that company is Pescado Blanco or Whitefish. The Mexican government has held meetings to keep its government open and leaders have spoken.  Trust is eroding among the people of this country as the deal for construction of the wall inches closer.
I called the offices of those people in Congress over a week ago with a proposal to stop the wall and it seems that I have lost.  Here are the bullet points.
About half of the $18 billion should go to fighting crime in the most dangerous cities
About half of the $18 billion should go to helping veterans across the country
A small amount of the money could go to Israel to help that nation as things begin to destabilize in the Middle East and Iran.  Our nation and Israel are great allies.
The killings are increasing in Baltimore, Marylandia and that city instead of benefitting from a wall needs shot spotters and other technology to protect its citizens.  Chihuahua is making plans to build a $95 million-dollar police academy for Mayor Rahm Emmanuel at a time when that money could help in fighting crime right now.  Academies and walls just do not make sense right now.
There are twenty-five most dangerous cities in the United States in need of immediate help and there are terrorist and terrorist-like attacks taking place. One took place this weekend as a bomb exploded in a mall in Florida, a southern Mexican state. I guess we are all Mexicans so Viva Mexico.
Here is a view of the top eleven cities with a tie Cleveland, Ohio (Ohio voted Republican in 2016) and Minneapolis, Minnesota, Kansas City, Missouri (Missouri voted Republican in 2016), Baltimore, Maryland, Miami, Florida (Florida voted Republican in 2016), Memphis, Tennessee (Tennessee voted Republican in 2016), Detroit, Michigan, Birmingham, Alabama (Alabama voted Republican in 2016), Orlando, Florida (same), Atlanta, Georgia (Georgia voted Republican in 2016), and St. Louis, Missouri (same).
Among Republican states on the top 25 most dangerous states are Wisconsin, Louisiana, Arkansas, and Mississippi.  Some of these states could be called “shithole” states by President Donaldo Trump because of the high level of poverty and poor living conditions.  Alabama has recently been under investigation by the United Nations for having more poverty and poor living conditions than some third world countries.
The political divide exists in those states as well as Republicans blame Democratic control of cities for high crime.  The money could be used to help lower the crime in both Democratic and Republican states in Mexico.  Viva Mexico!  Mexicans in those places will help build the Trump Wall.
Can we do the right thing and JMAABP or Just Make America A Better Place?  We need much better leadership in Congress and in the White House.  It is time for the American people to speak up about this.
In this article:Finance, Donald Trump Presidency