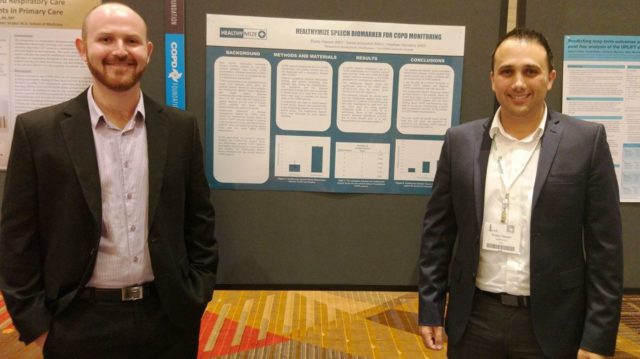 Israeli startup Healthymize has developed an app that records all your calls but, rather than send that data to Facebook or Google to sell you products you didn’t even know you wanted, Healthymize listens for signals of COPD (chronic obstructive pulmonary disease).

If Healthymize detects a negative breathing pattern, a particular kind of cough or deterioration in the caller’s rate of speech (compared with a baseline of previously recorded calls), the app alerts the patient and his or her medical team.

Such early intervention can significantly reduce hospitalization and even death. “We don’t want patients to get to the hospital. If they do, that’s already too late,” Healthymize CEO and cofounder Dr. Shady Hassan tells ISRAEL21c.

Most COPD patients don’t contact their physician when symptoms begin, but rather wait four or more days. Yet every 24-hour delay doubles the risk of hospitalization, Hassan stresses.

Although when Healthymize is released in 2018 it can be used by anyone, the app is intended initially for people already diagnosed with COPD who are at risk for a potentially fatal flare-up.

The idea for Healthymize came from patients getting better, not worse. Working as an attending physician at Haifa’s Carmel Hospital, Hassan noticed that COPD patients’ voices improved as they received treatment. What if the same happened in reverse, he wondered.

Hassan, who grew up in the Druze village of Julis, met Healthymize CTO Daniel Aronovich during a hackathon at the Technion-Israel Institute of Technology in 2015. Aronovich was then a PhD student in electrical engineering. The two clicked and began brainstorming.

A third member of the Healthymize team, Rafi Gidron, is a serial entrepreneur who cofounded Chromatis Networks, which was acquired by Lucent in 2000 for $4.5 billion. Gidron invested in Healthymize; additional financing came from the Israel Innovation Authority.

The seven-person Haifa-based company is currently raising a seed round. That shouldn’t be too hard: Global equity funding in private digital health startups reached $6.1 billion in 2016 according to the research firm CB Insights.

Healthymize runs its initial voice analysis on the user’s smartphone. The data is then uploaded to the cloud where Healthymize does more intense processing. “We don’t send the recordings themselves in order to preserve a patient’s privacy,” Aronovich points out.

While the company is focused on COPD, the same principles apply for other conditions, including heart disease and even mental illnesses. Hassan and Aronovich chose COPD first in part because the Healthymize methodology was a logical fit.

“We spoke to COPD physicians around the world,” Hassan tells ISRAEL21c. “They teach their students to listen to a patient’s voice. If a patient writes an email saying ‘I don’t feel well,’ the doctor picks up the phone right away. So we’re doing what these physicians have been doing for 30 years, just in a more accurate and more scalable way.”

Healthymize has conducted pilots in Israel and will begin testing in the UK in 2018. Hassan says the product will be delivered via hospitals, insurance companies, home healthcare and telemedicine providers.

It’s a classic business-to-business approach, but “everyone can benefit,” he insists. Consumers will be able to buy the app, too, from the Apple and Android app stores.

Healthymize is not the only product that monitors COPD, but it’s the first to monitor a patient’s voice automatically and consistently in the background, providing what Hassan says will be a product “at a lower price with greater patient compliance.”

Other COPD products use external equipment to check oxygen saturation in the blood or use “smart inhalers” for monitoring medication. “If a patient is feeling worse and using his inhaler more than usual, it’s too late,” says Hassan.

Hassan and Aronovich hope that eventually their app will be “prescribed” to patients at risk just like glucose apps are prescribed today to diabetes patients, and that it will find its way onto devices such as the Google Home and Amazon Echo personal assistants.

So, breathe into your phone. Eavesdropping can sometimes be a good thing.